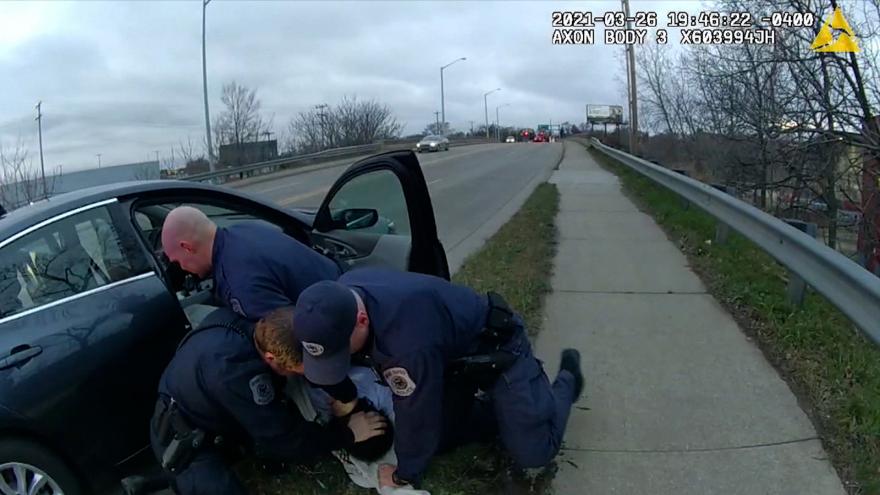 (CNN) -- A Grand Rapids, Michigan, officer who is seen on bodycam footage punching a man during a March traffic stop initiated for littering has been defended by his police department.

Bodycam footage of the incident, provided by an attorney for the man who was punched, Diabate Hood, shows at least four officers attempting to handcuff Hood while he is on the ground next to a stopped vehicle. One officer is seen striking Hood several times in the face with his fist. Hood screamed "my eye" multiple times.

The Grand Rapids Police Department has not identified the officer who punched Hood or any other officer involved. CNN has placed open records request for all other body camera videos of the incident.

"This is the police work that I expect from my personnel," GRPD Chief Eric Payne said. "I have made the enforcement of violent crime and the recovery of illegal firearms one of the department's top priorities."

GRPD Special Response Team officers were surveilling a street south of downtown Grand Rapids as part of its "Operation: Safe Neighborhoods" on March 26 when they conducted a traffic stop for a littering violation, according to a GRPD statement issued Wednesday.

Officers investigated further "based on the actions, behavior and conduct of the occupants," said the statement.

"As a result of the investigation, one subject attempted to flee and resist officers," according to GRPD's statement.

But attorney Tyrone Bynum told CNN that Hood "intends to sue GRPD, the city of Grand Rapids, Michigan, and the City Manager." According to Bynum, Hood was driving the vehicle when he was "pulled over and then beaten by GRPD."

In the video, officers are heard saying "stop resisting" as Hood covers his face with his hand after being struck, then extends his arm out toward one of the officers. Hood replies that he is not resisting.

The officers tell Hood to "relax" as they try to put handcuffs on him.

At one point there is a scuffle and officers appear to pile on top of Hood who yells repeatedly that he can't breathe. One of the officers responds, "You're breathing right here bro." Throughout the arrest, footage shows Hood yelling "my eye" and one officer replies, "I don't care about your eye." Another tells him to shut up.

Hood is currently charged criminally with attempting to disarm an officer during the incident, carrying concealed weapons, and assaulting or resisting a police officer, court records show. Bryum did not comment on the charges against his client.

"Force was deemed necessary to stop the threat and effect the arrest," said GRPD's statement.

"The result of the traffic stop was three felony arrests and the recovery of four firearms," said GRPD. Police have not yet identified any of the people arrested and it's not clear how many people were in the vehicle.

"To date there have been no Internal Affairs complaints filed in this incident," said GRPD.

CNN has reached out to the City of Grand Rapids and the Grand Rapids Police Officers Association for comment regarding Hood's intent to sue.