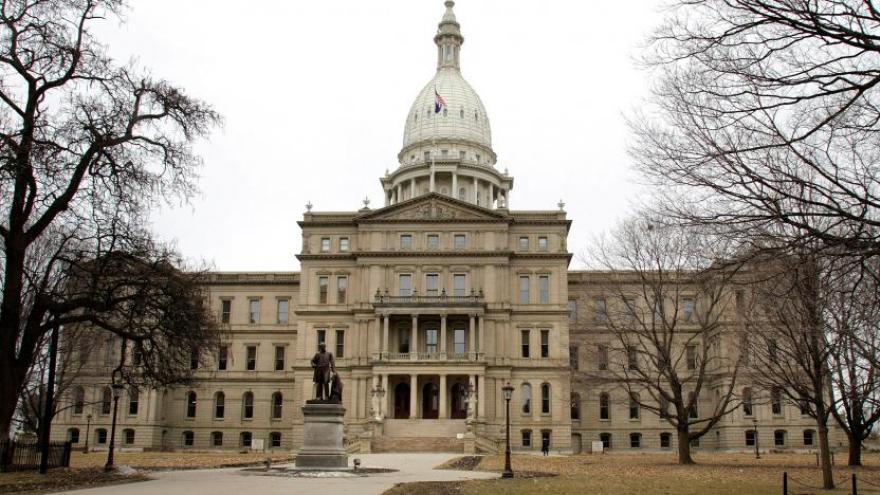 Michigan Republicans introduced a package of election bills on March 24 that would bring a raft of voting restrictions to the state, the latest example of GOP lawmakers working to change election laws in a battleground state following the 2020 election.

(CNN) -- Michigan Republicans on Wednesday introduced a package of election bills that would bring a raft of voting restrictions to the state, the latest example of GOP lawmakers working to change election laws in a battleground state following the 2020 election.

Described by Republicans as an effort to modernize and secure the state's elections, the bills would clamp down on ballot drop box hours, require voters to provide photo ID when applying for an absentee ballot and block unsolicited absentee ballot applications from being mailed out en masse.

"Senate Republicans are committed to making it easier to vote and harder to cheat," GOP Senate Majority Leader Mike Shirkey said in a statement. Shirkey drew attention in February after he was caught on a hot mic describing the January 6 Capitol insurrection as a hoax.

Several of the Michigan election bills appear to be in response to debunked conspiracy theories that were spread about the ballot counting process in Michigan. One bill allows people from each party to oversee and record all precinct audits. It would require clerks to provide live streaming coverage of absentee ballots that are "in custody."

Another bill would make it a misdemeanor to impede a poll watcher or challenger from recording ballot counting with their phones or cameras. There are also proposals that focus on increased poll challenge and watcher training.

Other bills in the package focus on voting rolls and would add new, more frequent requirements on updating them.

Republicans control the House and Senate in the state, but Michigan Gov. Gretchen Whitmer is a Democrat who is likely to veto the package of bills, though some of the proposals could garner bipartisan support.

Part of a larger GOP effort

The bills are part of a larger effort by GOP legislators across the country -- including in the battleground states of Georgia and Arizona -- to roll back voting access in the wake of the 2020 election. The November election saw record numbers of early and mail-in voters, triggering baseless claims of voter fraud from former President Donald Trump as well as some of his fellow Republicans and eventually leading to the deadly insurrection on January 6.

Across the country, according to a February analysis by the liberal leaning Brennan Center for Justice, at least 253 bills have been introduced this year in 43 state legislatures with provisions that would restrict voting access -- more than six times the number of bills for the same time last year.

Michigan was a focal point of Trump's efforts to sow doubts about the validity of the November election, and Republicans including Shirkey met with Trump at the White House ahead of a drama-filled final vote certification in favor of now-President Joe Biden.

Michigan Democrats roundly rebuked the election bills Wednesday as an effort to suppress voter turnout in the state.

"It's very troubling," Democratic Minority Leader Jim Ananich told CNN. "The problem is when the premise of the introduction is based on a lie, it's hard to take serious the measures that are a part of it, right?"

"You can't change the rules because you don't like the outcome. We won. Voters liked our ideas better," he said. "It's a real cynical way of looking at our American system. We're gonna fight it tooth and nail."

Michigan Secretary of State Jocelyn Benson, a Democrat, said in a statement, "Many of the bills in this package will make it harder for citizens to vote. Rather than introducing bills based on disproven lies and copied from other states, lawmakers should be codifying what worked in 2020."

"Michigan voters demonstrated they want our elections to be accessible in 2018 when they enshrined new voting rights in our state constitution, and again in 2020 when millions exercised those new rights. Everything we do should be based on protecting the right to vote, and too many of these bills would do the opposite."

That message was echoed by Chris Swope, president of the nonpartisan Michigan Association of Municipal Clerks, who labeled the proposals "some of the most egregious voter suppression ideas Michigan has seen."

"With nearly 30 percent of Michiganders not participating, we need to focus on expanding ballot access, not attempts to disenfranchise certain voters."

The bills have been referred to the Senate Elections Committee.

"I've been referring to it basically as a continuation of January 6," Ananich added Wednesday.

"It's just January 6 with a suit and tie on. This is just an attempt to overthrow the election."

This story had been updated with additional information Wednesday.