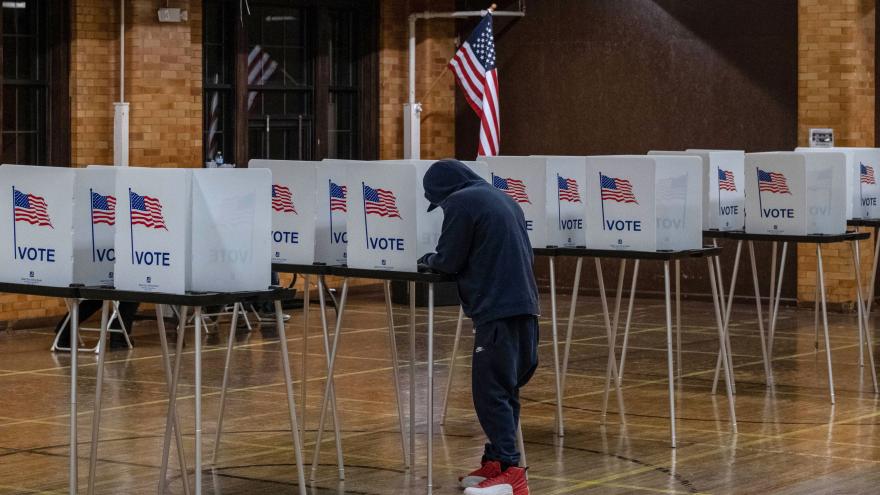 The Michigan Senate on June 16 passed three bills that would restrict voting rights in the state as part of a larger Republican-led package intended to overhaul election laws, despite Democratic Gov. Gretchen Whitmer\'s all-but-certain veto of the measures. - Seth Herald/AFP/Getty Images

(CNN) -- The Michigan Senate on Wednesday passed three bills that would restrict voting rights in the state as part of a larger Republican-led package intended to overhaul election laws, despite Democratic Gov. Gretchen Whitmer's all-but-certain veto of the measures.

The state Senate advanced the measures -- part of a 39-bill package introduced by state Republicans earlier this year -- in 19-16 votes. One bill would require those requesting mail-in ballots to provide driver's license or state identification numbers. The other two would require ID for in-person voting and allow people to vote only via provisional ballots without it. They now move to the state's House for consideration before they can be sent to Whitmer's desk.

Whitmer has repeatedly denounced the bills, but GOP officials have threatened to circumvent the governor and end-run her expected veto by capitalizing on a quirk of Michigan law. If Republicans gather 340,000 signatures in a petition drive, the House and Senate can enact legislation without the governor having the power to veto it.

The Senate Elections Committee also advanced four bills later Wednesday that deal with state election law. One of them, Senate Bill 277, would in part authorize county clerks to flag, but not remove, the registration record of a deceased voter. A different bill in the broader package, SB 282, would require a more stringent removal process for potential deaths -- though that proposal has not yet passed through the committee.

Another measure advanced by the committee on Wednesday would require that voters declare on their registration applications that they don't claim the right to vote in another state or territory, while two others adjust Michigan law to streamline the process for military voters through an electronic system.

Lavora Barnes, the chair of the Michigan Democratic Party, said the bills were passed Wednesday as part of a GOP strategy to get fewer people to vote.

"Today's actions in the State Senate were deplorable, racist, and quite frankly shameful," she said in a statement. "Michigan's 2020 elections were safe and secure. But that has not stopped the Republicans from launching an all-out attack on our right to vote."

Ron Weiser, chairman of the Michigan Republican Party, said in a statement provided to CNN later Wednesday that "the steps taken today by Republicans will make it easier to vote, and harder to cheat."

Fourteen states have enacted at least 22 new laws restricting voting this year, according to the Brennan Center for Justice at New York University.

And more Republican-controlled state legislatures have joined the march to limit access to the ballot box, motivated by former President Donald Trump's unfounded claims that voter fraud contributed to his White House loss in 2020.

Most of the new laws make it harder to vote absentee and by mail, after a record number of Americans voted by mail in November.

This story has been updated with comments from the chairman of the Michigan Republican Party.