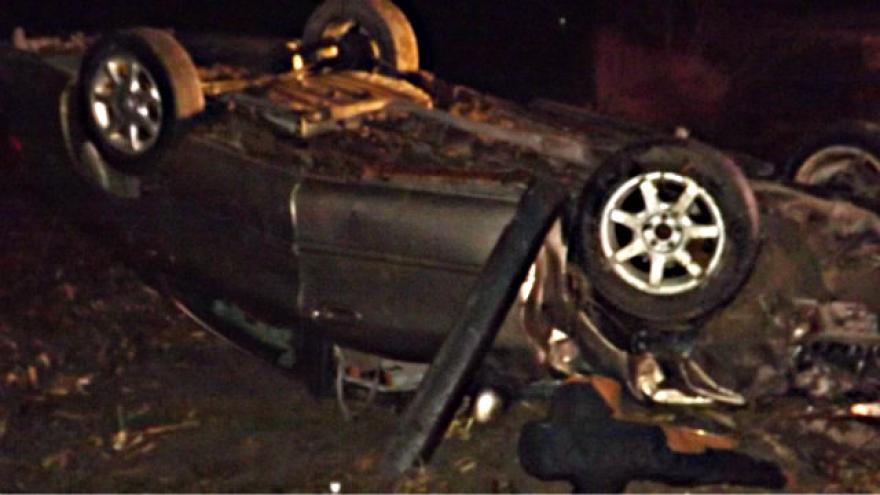 A quick thinking rookie sheriff deputy rescued a toddler who was trapped upside down in his car seat. Photo courtesy WJRT

Saginaw County, MI (WJRT) -- A quick thinking rookie sheriff deputy rescued a toddler who was trapped upside down in his car seat.

Deputy Anthony Genia with the Saginaw County Sheriff's Office was dispatched to an accident on Swan Creek Road at South Steele Road southeast of Merrill just after 6 a.m. Friday.

When he arrived, he found a 21-year-old father outside of his car, but his 2-year-old son was still inside the car.

"I went and looked inside the window and the kid was in his car seat hanging upside down. I was unable to get any of the doors open, the doors were smashed shut," Genia said. "So I went on the other side. The driver's side window was actually smashed open. I was able to crawl through and squeeze in there."

The father later told Genia he had fallen asleep while driving. When he dozed off he missed a curve in the road and ended up driving straight.

He hit an embankment, went airborne and the car rolled into a farm field.

The child was secured properly in the car seat, but Genia worried about the toddler hanging upside down for too long so he decided to crawl in. Unbuckling a car seat can be tricky right side up, so he had a challenge getting the child out upside down.

"Carefully, you know, just tried to unbuckle the chest strap and then the buckle that went between his legs. And then once I got that undone I just kind of lowered him to the, well it was the roof, because it was turned upside down," Genia said.

He handed to 2-year-old to another deputy who had arrived before crawling out himself. Surprisingly, Genia said the toddler wasn't even crying.

Genia has only been on road patrol solo for two weeks. He said it was a true team effort from the dispatchers to other emergency responders at the scene.

Both the father and child were taken to the hospital to be checked out, and they are expected to be OK.