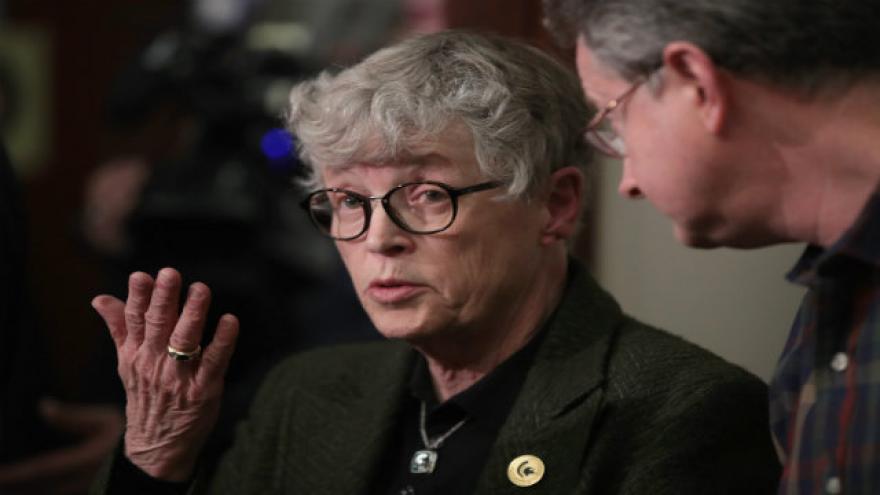 Victims are angry with Michigan State University over how it handled complaints over Larry Nassar. Photo courtesy Scott Olson/Getty Images

(CNN) -- Clasina Syrovy's anger in a Michigan courtroom on Monday wasn't directed only at Larry Nassar, the disgraced former gymnastics physician who she says sexually abused her.

Syrovy, a former club gymnast who was treated by Nassar at a Michigan State University facility, said the school did nothing to stop his crimes there and she called on its president to resign.

"I would like to call out Lou Anna Simon, for her cowardly behavior," Syrovy said in court. "She ... doesn't deserve to hold the title of MSU president. Her recent behavior and comments are a joke. The least she could do is step down from her position and show us a little courtesy."

Simon has recently come under fire for what critics say is mishandling of the Nassar scandal. They say the leader has been tone deaf and needs to be among those held accountable for what happened while Nassar was employed as a sports physician at MSU from 1997 to 2016.

Several victims have stated that they reported Nassar's behavior to MSU years ago, but that they were either silenced or that officials did nothing to end the abuse.

Michigan State maintains no official believed Nassar committed sexual abuse until newspapers began reporting on the allegations during the summer of 2016. Any suggestion that the university engaged in a cover-up is "simply false," an MSU statement asserted last week.

Simon has expressed support for the women who have spoken out against Nassar, but said she has no plans to step down from the position she has held since January 2005.

Syrovy is among more than 100 young women who have come forward with their stories of survival, facing Nassar in court as he awaits sentencing.

Besides questions about Michigan State's handling of complaints against the serial molester, the scandal has had repercussions for USA Gymnastics, which also employed him. That organization on Monday announced resignations from its board of directors' executive leadership.

Michigan State's board of trustees affirmed their support for Simon last week, saying that she is "the right leader for the university and she has our support."

But one trustee said the president should quit.

Mitch Lyons said he did not believe that anyone at MSU, including Simon, "knowingly engaged in any coverup or criminal wrongdoing at any time." Still, Lyons said, "This atrocity is simply too much to overcome and our institutional accountability has been compromised."

Simon says she did not receive copy of report

Nassar has pleaded guilty to seven counts of criminal sexual conduct in Ingham County, Michigan, and has admitted to sexually assaulting and abusing young girls under the guise of providing medical treatment. His victims include Olympic gymnasts Aly Raisman, Jordyn Wieber and Simone Biles.

Nassar also pleaded guilty to three charges of criminal sexual conduct in Eaton County, Michigan, and already has been sentenced to 60 years in prison for federal child pornography charges.

Several of the victims placed blame on USA Gymnastics and Michigan State University, which employed Nassar for years as the sexual abuse occurred. Both institutions say they took action when they learned about the abuse.

The Detroit News recently reported that misconduct allegations against Nassar reached at least 14 MSU representatives in the two decades before his arrest.

A Title IX investigation into Nassar reportedly occurred in 2014, but the investigation concluded that Nassar's conduct was not of a sexual nature and he was cleared of any Title IX violations, the News reported.

Simon told the newspaper that she was informed in 2014 that a sports medicine doctor was under investigation, but that she did not receive a copy of the report.

The university president was blasted for not attending the start of court proceedings last week; critics said that the absence sent an unfortunate message.

"Her lack of attendance to these proceedings shows how much she really cares, sitting from the sidelines, being a bystander, just like she did while reports surfaced. She certainly isn't showing any support for us," Syrovy testified on Monday.

Simon said she and MSU trustees Chair Brian Breslin made the decision not to attend the first day of the sentencing out of deference to Nassar's victims. "The focus and priority should remain on them," Simon said in a statement.

The president did attend court the following day, telling reporters that she was not going to challenge the words of victims, particularly those who called out MSU for its alleged inaction. "It's important for them to say their words today in their own way. This is not the place for that conversation."

Olivia Cowan and Larissa Boyce were among several of Nassar's victims who said the university failed to protect them. Nassar treated many non-MSU students -- many of them children or teenagers -- on campus.

"A public apology after you've hid behind this monster for over 20 years will never be enough. Where were you when we needed you?" Cowan told the court. "If you would have only listened to the women that brought complaints and concerns over all these years, this would have saved so many women and children from being abused, and from all the scars this has created."

"I told Michigan State University back in 1997," Boyce said. "Instead of being protected, I was humiliated. I was in trouble and brainwashed into believing that I was the problem."

Simon, in a statement, said she heard the pain and suffering from victims.

"I am truly sorry for the pain his abuse caused and continues to cause. I have always led with passion and to the best of my abilities for Team MSU, and I will continue to do so for today and tomorrow."

Calls for her resignation

On Friday, Simon wrote a letter to the MSU community, saying she was committed to supporting victims and creating a safe campus environment. She acknowledged lawsuits that have been filed against the university. USA Gymnastics also is facing litigation over Nassar.

"The FBI, in cooperation with the MSU Police Department, conducted an investigation earlier this year into whether any university employee engaged in criminal conduct relating to Nassar's actions; there were no charges filed," Simon wrote.

Still, the push for the president to step down persists.

"President Lou Anna K. Simon, we now speak directly to you. Whether or not you admit guilt in this storyline, you need to do the right thing," the editorial reads. "Simon, if you're the Spartan you claim to be, you will step down and bow out gracefully. We hope you make the right choice, because time's up."

An MSU student group has called for a rally Friday to demand Simon's resignation.

Editorial boards of other local newspapers and media outlets, such as The Detroit News, M Live Media Group, and the Lansing State Journal have published pieces expressing their belief that Simon is no longer fit to lead MSU.

The editorial board of the Lansing State Journal wrote: "While Simon's 12-year tenure has been marked by numerous accomplishments, there is one stark and significant failure that now overpowers all else: MSU's inability to keep women safe from sexual assault and harassment on campus."