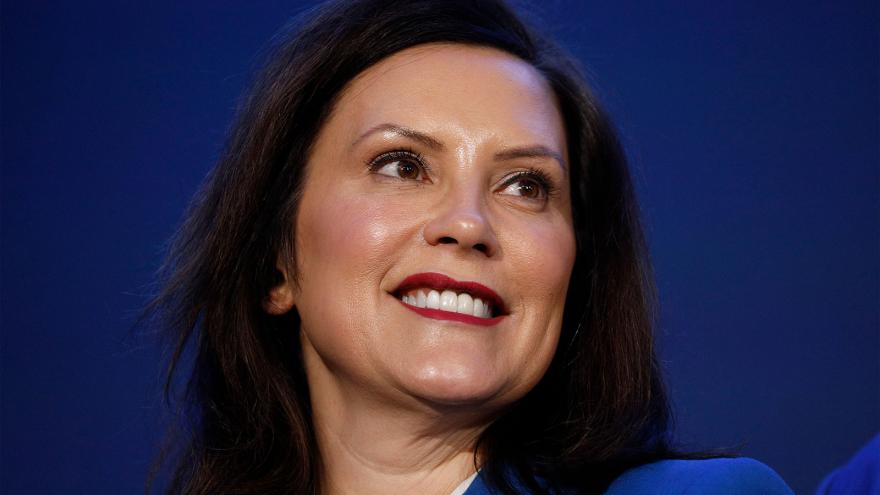 (CNN) -- The Michigan Supreme Court ruled Friday that Gov. Gretchen Whitmer had no authority to issue or renew executive orders relating to Covid-19 beyond April 30.

The Democratic governor extended the state's coronavirus emergency declaration by executive order April 30 after the Republican-controlled Legislature advanced a bill that would not have renewed the original declaration.

Whitmer cited the Emergency Management Act of 1976 (EMA) and the Emergency Powers of the Governor Act of 1945 (EPGA) as authority, with two lower courts subsequently dismissing legal challenges to her actions.

But the Michigan Supreme Court Friday ruled that Gov. Whitmer did not possess the authority under the EMA to re-declare a state of emergency or disaster based on the pandemic and that the EPGA was an "unlawful delegation of legislative power to the executive branch in violation of the Michigan Constitution."

"Accordingly, the executive orders issued by the Governor in response to the Covid-19 pandemic now lack any basis under Michigan law," the justices' opinion reads.

"Today's Supreme Court ruling, handed down by a narrow majority of Republican justices, is deeply disappointing, and I vehemently disagree with the court's interpretation of the Michigan Constitution," she said. "Right now, every state and the federal government have some form of declared emergency. With this decision, Michigan will become the sole outlier at a time when the Upper Peninsula is experiencing rates of Covid infection not seen in our state since April."

As of Friday night, Michigan had reported 139,996 cases of coronavirus and 7,110 deaths, according to John Hopkins University.

Whitmer noted that the court's ruling would not take effect for at least 21 days and that her emergency declaration and orders would remain in place until then.

She stressed that the coronavirus pandemic remains a clear danger: "This virus has now killed more Michiganders than World War I. It is a novel virus for which there is no cure, and which has infected the President of the United States, members of the United States Congress, and Legislators across our state.

"This virus continues to take the lives of Americans every single day, and without a cure or approved vaccine, that will continue for the foreseeable future."

In a footnote in the court's decision, written by Justice Stephen Markman, the court said, "Our decision leaves open many avenues for the Governor and Legislature to work together to address this challenge and we hope that this will take place."

The Michigan Supreme Court issued its opinion at the request of the US District Court for the Western District of Michigan.

The district court had asked the justices "to resolve questions concerning the constitutional and legal authority of the Governor to issue executive orders over the past six months limiting public and private gatherings, closing and imposing restrictions upon certain businesses, and regulating a broad variety of other aspects of the day-to-day lives of our state's citizens in an effort to contain the spread of this contagious and sometimes deadly disease."

It followed a lawsuit filed by three medical centers against Whitmer in federal court challenging her executive order that prohibited nonessential procedures during the pandemic.

In May, a Michigan judge dismissed a lawsuit filed by the Republican leaders of the state's Legislature challenging Whitmer's use of emergency powers to extend Michigan's state of emergency.

Court of Claims Judge Cynthia Diane Stephens ruled that while Whitmer's action of re-declaring the same emergency violated the provisions of the state's Emergency Management Act, the Legislature's challenges to Whitmer's use of the Emergency Powers of Governor Act to issue executive orders are meritless.

Stephens wrote May 21 that "through two distinct acts, stated in plain and certain terms, the Legislature has granted the governor broad but focused authority to respond to emergencies that affect the state and its people."

On August 21, the Michigan Court of Appeals upheld that ruling, saying:

"Proceeding on the assumption that the Legislature had standing to file suit, we hold that the Governor's declaration of a state of emergency, her extensions of the state of emergency, and her issuance of related EOs clearly fell within the scope of the Governor's authority under the EPGA. We further hold that the EPGA does not violate the Separation of Powers Clause. We therefore decline to address whether the Governor was additionally authorized to take those same measures under the EMA and whether the Governor violated the EMA—those matters are moot.

"Finally, we hold that there is no basis to reverse the order of the Court of Claims denying the motion to intervene."

Whitmer, who announced a state lockdown in March and lifted it in June, has faced a backlash regarding her closure orders.

President Donald Trump has attacked Whitmer, a first-term governor, in personal terms over her criticism of his handling of the coronavirus pandemic.

In May, Michigan's attorney general sent a warning to Ford for allowing Trump to refuse to wear a mask in front of cameras during his visit to a manufacturing plant in the state.

In July, Whitmer called for a "national mask-up campaign," saying it was necessary for everyone, even those in the White House, to wear masks to stem the spread of coronavirus.