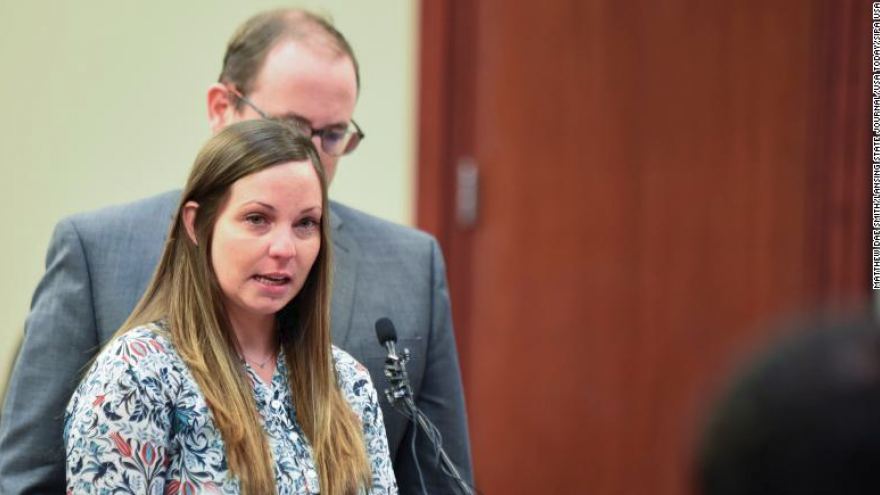 (CNN) -- Brianne Randall, who reported her abuse by disgraced former USA Gymnastics doctor Larry Nassar to police in 2004, will receive a public apology Thursday from Meridian Township, Michigan, officials for their handling of the case.

Township Manager Frank Walsh and Police Chief David Hall will issue "a public statement and apology" for dismissing Randall's accusation that she was sexually abused by Nassar, the former Michigan State University doctor sentenced last week to 40 to 175 years in prison, according to a statement from the township.

Randall's victim impact statement was read at Nassar's sentencing hearing this month in Ingham County as part of a series of powerful testimonies by victims or victims' family members who confronted the once world-renowned sports physician in court.

Randall was 17 at the time Meridian Township police took her complaint against Nassar in September 2004. She told an investigator that she was alone during her second visit with the doctor, who was treating her for scoliosis, according to a police report.

Nassar massaged her buttocks with his elbow and said, "I bet people at physical therapy don't do this." He also rubbed her breasts, cupped her vagina and tried to penetrate it but could not because she was wearing a tampon, the report said.

Randall told an investigator she was "scared" and "uncomfortable" during the examination and that "it freaked her out." She filed the police report after telling her mother what happened during that second visit. She also completed a rape kit examination at a hospital.

When an investigator interviewed Nassar, the doctor admitted touching Randall in her vaginal area, saying it is a medical technique known as the "sacrotuberous ligament release," the police report said. He said the technique "has been published in medical journals and training tapes," and provided police a PowerPoint presentation detailing the procedure.

The presentation, titled "The Sacrotuberous Ligament: The Grand Junction," was written by Nassar and included photos of him performing the procedure.

The investigator then contacted Randall's mother to tell her he was "closing the case with no prosecution being sought, due to the facts presented ... by Dr. Nassar."

Randall's mother told the investigator she was concerned about the way Nassar explained the procedure to her daughter and that he was not wearing gloves during the examination.

Randall has said she was hesitant to leave her 7-week-old son at home in Seattle and travel to Michigan for Nassar's recent sentencing. Her victim impact statement was read in court.

After hearing the statements of other women though, she decided to travel to Michigan to support them and confront Nassar.

Her travel costs were paid for by Meridian Township police.

"We wanted her to be able to share her pain with other survivors in front of Nassar. We share her pain," Walsh, the township manager, told CNN at the time.

Nassar was sentenced last week after more than 150 women and girls said in court he sexually abused them over two decades.

Nassar pleaded guilty to seven counts of criminal sexual conduct in Ingham County and admitted to using his trusted medical position to assault and molest girls under the guise of medical treatment. He also pleaded guilty to child pornography charges in federal court and was sentenced in December to 60 years in prison.

Nassar returned to court Wednesday for sentencing in Eaton County, Michigan, where he has pleaded guilty to three counts of criminal sexual conduct.

At least 65 victims are expected to speak about Nassar's abuse at his latest sentencing hearing, his third in recent months.

The scandal has led to a widening inquiry into how institutions failed to stop the abuse for so long. Michigan Attorney General Bill Schuette has appointed a special prosecutor to investigate "every corner" of Michigan State, and several organizations have initiated investigations of USA Gymnastics.