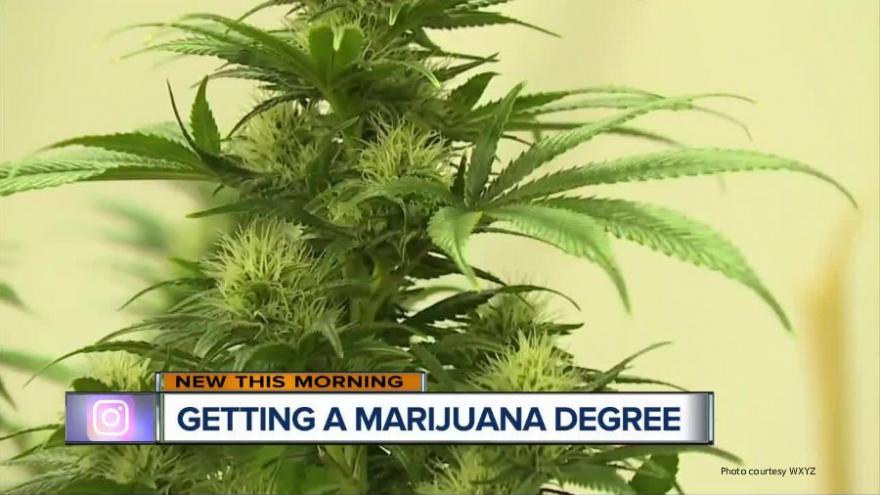 MARQUETTE, Mich. (WXYZ) -- A Michigan college is believed to be the first in the nation to offer up a marijuana-based undergraduate degree.

If you’re ready for a joke about “Pot University” or class times at 4:20 p.m. you’re likely not the caliber of student cut out for the classes — as the professors linked to the program at Northern Michigan University explain: this is a tough course load.

“At the undergraduate level there has been a void in this area,” said Brandon Canfield, explaining that until recently only graduate students were doing research on marijuana. “I expect in the next couple years we’ll see quite a few of these programs popping up.”

The legal marijuana business has been booming for years.

A report by the group, Cannabis Benchmarks, shows that Colorado racked up nearly $250 million in total marijuana sales during the first two months of this year.

When you add in states that allow medical marijuana, and those who’ve recently legalized it’s use for recreation, and the numbers are hard to fathom. As legalization spreads, schools are now tasked with the challenge of deciding whether to become an opportunity for would-be pot growers to learn.

Canfield notes that their class, aimed at medicinal plants, goes beyond marijuana. However, the recent spike in interest is tied directly to the students who realize there is room for huge growth within the industry. NMU’s classes will focus on both the business-side of the medicinal plant world, and the chemistry makeup of plants.

“What we hear from a lot of people is that they will send their products to 10 different labs and get 10 different results,” said Canfield, noting that more science is needed within the marijuana business if it expects to keep up with the standards of business required by other government-regulated medicine.

“That does not bode well for the consumer, or the industry in general if it stays that way.”

The four-year program began this semester. The first class has a dozen students, a mix of transfer students and new students.

Those students will learn a mix of chemistry, biology, marketing and finance throughout their four-years. The program is so new that it’s expected some of the rules linked to the lab work that the students will participate will change before they reach the upper levels of the course work.

Canfield noted that a lot of the work they’ll do will be on such small samples that they would have no use for anything outside of lab work — in other words, smoking the products won’t be involved in any way.

“We’ll work with plants that are legal to grow, a lot of the work is the same,” said Canfield noting that students don’t have to work directly with marijuana to understand the botany-side of the business.

“This goes straight to your lungs, you need to know what’s going into your body.”

Reed said he’s been watching what’s beginning at Northern Michigan with a lot of interest. He currently grows for a medical marijuana patient, and is a believer in organic foods and medicine. Reed said he’s too far along in his own career to restart school, he grows on the side, but said anything that brings marijuana to the mainstream is good for the patients who are using it.