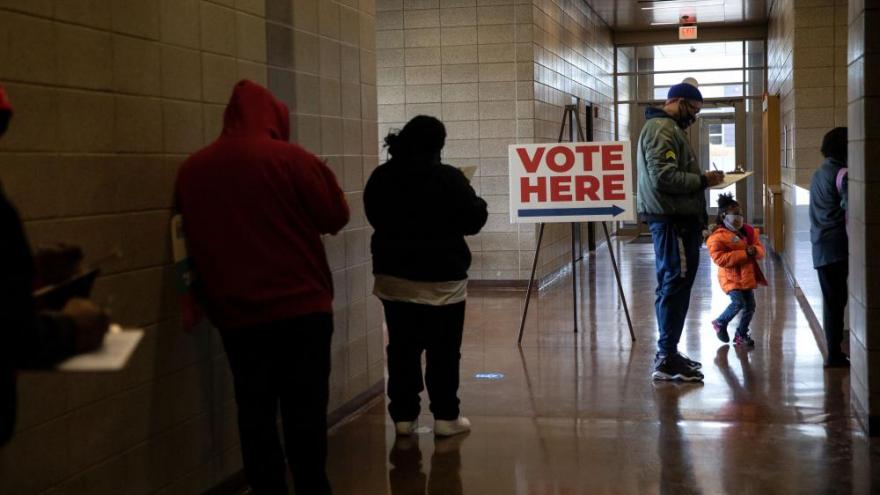 The Detroit-based Wayne County Board of Canvassers was unable to certify on Tuesday the county's presidential results before the deadline. This image shows people standing in line to cast their ballots at the Wayne County Community College in Detroit, Michigan, on October 24, 2020.

(CNN) -- A bipartisan panel in Michigan's largest county unanimously certified its presidential results on Tuesday night, a stunning reversal hours after Republicans had temporarily blocked certification based on dubious claims of voting irregularities in Detroit.

The Wayne County Board of Canvassers initially deadlocked 2-2 on whether to certify the results, with two Democrats voting to certify and two Republicans voting against it, citing concerns of examples where Detroit precincts found discrepancies during their post-election review process. That vote was immediately condemned by Democratic officials and nonpartisan experts, who said the election in Detroit had been conducted cleanly.

President-elect Joe Biden won Michigan by more than 148,000 votes, a victory made possible by a strong showing in Wayne County, where he netted more than 322,000 votes over President Donald Trump.

The initial vote against certification drew the attention of the President, who posted a series of tweets praising the GOP members of the canvassing board for "having courage." He also spread false claims about massive voter fraud and said officials in the state should "flip Michigan back to TRUMP."

Trump has mounted a long-shot attempt to overturn the election results through lawsuits and the Electoral College -- and one of the Trump campaign's legal advisers said the initial refusal to certify the results should open the door for the "Republican state legislator (sic) will select the electors." GOP lawmakers in Michigan have repeatedly said they'll respect the statewide popular vote and won't intervene in the process.

When announcing their decision to certify the results, the board also called on Michigan Secretary of State Jocelyn Benson to do a comprehensive audit on the precincts in Detroit that had found discrepancies during their post-election review. In an interview with CNN's Chris Cuomo on "Cuomo Prime Time," Benson said she would conduct that audit, and she praised the decision by the county board to reverse itself and certify the results.

"It appears that the truth won in this scenario," she said. "Basically, the evidence was clear: There were no irregularities, there was no evidence of widespread fraud and in fact there were simply minor clerical errors. ... I think they did the right thing, they performed their duty and they certified the election for the voters in Wayne County."

Even after the initial party-line deadlock, experts were skeptical that the results from Wayne County would ultimately be excluded from the statewide count. That would have put Biden's Michigan victory in jeopardy -- but CNN has projected that he will win 306 electoral votes, which means he'd still become the next president even in the unlikely scenario that he doesn't get Michigan's 16 electoral votes.

During the meeting of the Wayne County Board of Canvassers, Vice Chair Jonathan Kinloch called the earlier deadlock "reckless and irresponsible." Kinloch is one of the two Democrats on the panel.

"This board, over the years, has taken pride in not allowing politics to show itself in the actions of what we do," Kinloch said. "There is no reason under the sun for us to not certify this election. I believe politics made its presence here today, and I think forever that this board will have to live with the fact that we have allowed external, non-relevant issues to impact this decision today, hoping to change and bring about an outcome that will not happen."

The Republican chair of the board, Monica Palmer, explained why she had earlier voted against certification.

"Based on what I saw and went through in poll books in this canvas, I believe that we do not have complete and accurate information in those poll books," Palmer said.

At one point, Palmer suggested that the board certify the rest of the county's results, aside from Detroit, which was not pursued by the board.

"I would be open to a motion to certify communities other than the city of Detroit" Palmer said, referring to other parts of Wayne County.

When the meeting opened up for public comments, Wayne County citizens lined up to voice their frustration over the board's initial decision to delay the certification of results for hours.

Rev. Wendell Anthony, the head of the Detroit branch of the NAACP, harshly criticized Palmer's suggestion to exclude Detroit from the county's certification of results.

"You have extracted a Black city out of a county and said the only one that I have fault against is the city of Detroit, where 80% of the people who reside here are African Americans. Shame on you," Anthony said. "Shame on you for leading to this level of corruption. You have disavowed your right to even sit in the seat that you occupy. You are a disgrace as it relates to the ability to have a free and impartial election in this nation."

She shared that at one point a Republican poll challenger approached her in a way that made her afraid for her life. To put into perspective how hurtful the delay in certification was to her, Lee-Payne reflected on joining the march on Washington with Dr. Martin Luther King when she was 12 years old.

An Air Force veteran and University of Michigan law student, who was a nonpartisan observer at the TCF Center on November 4, grew emotional when saying the board's decision diminished the rights he sought to defend.

"As someone who served in the military, I was willing to sacrifice my life so that every single American would have the right to vote. I thought that was something that we all believed in as Americans. It breaks my heart to see that some of my fellow Americans seem to disagree," Joseph Zimmerman said.

In a written statement after the initial deadlock, Benson said it was "common" for some precincts to have minor discrepancies with their poll books. But she also said, "Importantly, this is not an indication that any votes were improperly cast or counted."

Election experts and Michigan insiders reacted with shock to the original vote.

"The people have spoken: Joe Biden won Michigan by more than 140,000 votes," Gov. Gretchen Whitmer, a Democrat, said in a statement. "Today's action is a blatant attempt to undermine the will of the voters. The process, however, will move forward. Under Michigan law, the Board of State of Canvassers will now finish the job and I have every expectation they will certify the results when the job is done."

Nancy Kaffer, a columnist at the Detroit Free Press, tweeted, "This is unprecedented in my 20 years covering government here." Amy Walter of the nonpartisan Cook Political Report tweeted, "There has been zero evidence of fraud here or elsewhere" and said Republican efforts to block certification "does real and lasting damage to our institutions."

The GOP-led Michigan Senate voted in September in support of resolution confirming that the state's electors should be faithful to voting for the presidential candidate as certified by Michigan's election officials, Amber McCann, deputy chief of staff for Senate Majority Leader Mike Shirkey, confirmed to CNN.

This story and its headline have been updated with additional developments on Tuesday.