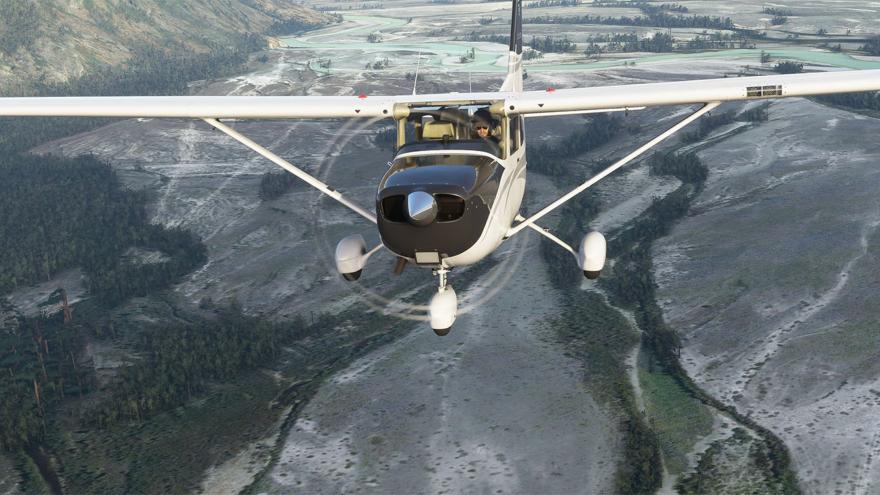 Originally Published: 17 AUG 20 08:12 ET
By Shannon Liao, CNN Business
(CNN) -- After a 14-year hiatus, Microsoft is launching a new version of its "Flight Simulator" video game — now with features like live weather and trafficas well as a massive world map.

"Microsoft Flight Simulator" lets anyone role play as a pilot and fly anywhere in the world, scoping out highly realistic sights along the way.

In the game, players begin by selecting a flight route, which typically begins on a runway. Just as in real life, players achieve liftoff by gaining momentum, and once in the air they must balance speed and momentum while avoiding obstacles like buildings. There are options to skip parts of a flight or accelerate flight time to destinations around the world, but part of the fun is checking out the scenery while en route.

The newest "Microsoft Flight Simulator" is an update to the company's oldest franchise. At nearly 38 years old, "Flight Sim," as its ardent fans call it, predates both Word and Windows and has developed a loyal fan base.

The new version, which starts at $59.99 with extra costs for additional planes and airports, comes out August 18 for both Windows and Xbox. The new live weather feature creates additional challenges when navigating the skies. For example, a storm that recently passed by the East Coast in real life was also visible within the game.

Players who have tried the game in preview have already uploaded YouTube videos of them flying beside skyscrapers in New York City, exploring Chernobyl and evenNorth Korea, among other locales that may not be accessible during the ongoing real-life pandemic.

"I've been in this house now since March; I can't really fly anywhere. I feel like the world maybe shrank a little... [the shutdown] certainly had a psychological impact," Jorg Neumann, head of "Microsoft Flight Simulator," told CNN Business. But in "Flight Sim," he has traveled to Texas, Nepal and parts of Africa.

The game includes 37,000 airports, 1.5 billion buildings and 2 trillion trees — part of why it takes a whopping 150GB to install. It contains 2 petabytes of satellite and aerial imagery, but it runs on cloud streaming to keep the game file size manageable.

Neumann is not a pilot, but he said heand his teamsolicitfeedback from a community of pilots as well as fans, and some of his team members have taken flying lessons.

While the new "Flight Sim" isn't simplified for beginners, there's a new checklist system that helps players figure out what needs to be completed so they can lift off safely.It can be intimidating for newcomers to manage the various controls and unfamiliar terminology like yokes and throttle, but the game offers tutorials and autopilot functions for more complicated tasks such as landing on water.

"Instead of dumbing down the flight physics... we help you fly the plane, [and make it] physically accurate," said Neumann.

This is the first new installment of the game since2006's "Flight Simulator X," and Microsoft has said itplans to service this new game for manyyears.