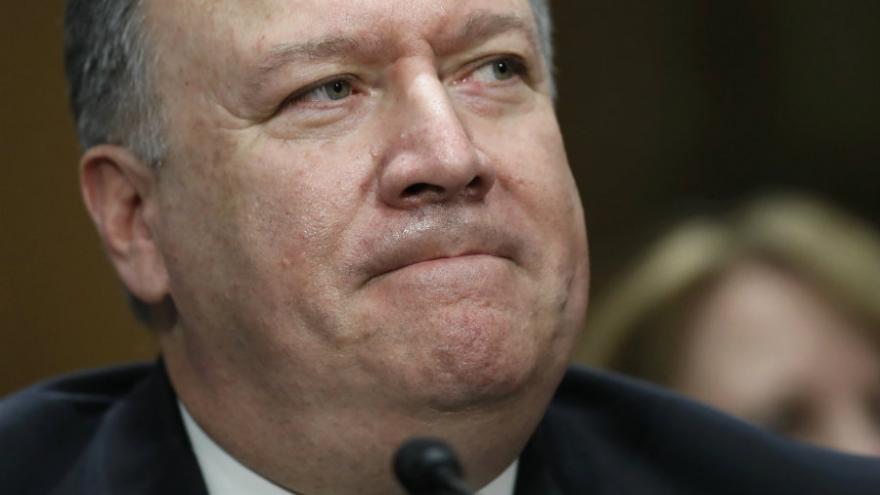 (CNN) -- Mike Pompeo, President Donald Trump's nominee to be secretary of state, advanced out of committee Monday with a favorable recommendation, following a last minute reversal from Sen. Rand Paul that averted a historic rebuke of the President's pick to be the country's top diplomat.

The Senate committee voted 11 to 9 with Democratic Sen. Chris Coons of Delaware voting present and Sen. Isakson voting by proxy.

"Having received assurances from President Trump and Director Pompeo that he agrees with the President on these important issues, I have decided to support his nomination to be our next Secretary of State," Paul, R-Kentucky, tweeted.

The vote had nearly been stalled because Sen. Johnny Isakson, a Republican from Georgia, was not able to attend as he had been delivering a eulogy at a close friend's funeral. Under Senate rules, a member who is not present cannot cast the determinative vote. But, in order to speed things up, Coons -- having already publicly voted against Pompeo's nomination -- voted present to move the nomination out of committee before 11 p.m. ET, when Isakson could have arrived.

Paul's previous opposition put Pompeo on track for a historic distinction: the first secretary of state nominee not to win a favorable recommendation from the committee, according to the Senate Historical Office.

President Donald Trump had applied pressure publicly to Paul, calling him out last week for his opposition to his nominee and saying the Kentucky senator "never let me down." On Monday, after Paul's announcement, the President said Paul is "a good man."

"I said he'd never let us down," Trump told reporters on the South Lawn of the White House.

Gaveling in the Senate's Foreign Relations Committee on Monday, Chairman Bob Corker, a Tennessee Republican, apologized for the late start, but noted a few "entrepreneurial" things had occurred in the moments before the hearing, an apparent reference to the timing of Paul's change of vote.

Pompeo was still expected to advance for a full floor vote when Paul was planning to vote against him.

Trump tweeted about the opposition Pompeo in the hours before his vote, though the President highlighted Democrats.

"Hard to believe Obstructionists May vote against Mike Pompeo for Secretary of State. The Dems will not approve hundreds of good people, including the Ambassador to Germany. They are maxing out the time on approval process for all, never happened before. Need more Republicans!" Trump tweeted.

Democrats, for their part, have raised concerns with what they view as Pompeo's hawkish posture on foreign policy and lack of willingness to stand up to Trump, who has a well documented close relationship with the current CIA chief.

But Republicans have countered that the opposition is driven far more by Democratic dislike for the President than the nominee himself. Pompeo, a former congressman who graduated first in his class from the US military academy and received a degree from Harvard law, has moved into a central role in the Trump administration's negotiations with North Korea, secretly meeting with the country's reclusive leader Kim Jong Un earlier in the month. It's something supporters have touted as another example of why Pompeo is ready for the job as the country's top diplomat.

As for the full Senate vote, senior GOP aides are comfortable Pompeo will win enough support in his floor vote, after three Democrats said they'll vote for him. Sen. Heidi Heitkamp, a North Dakota Democrat, is a "yes," which means he'd have the votes if all other Republicans -- minus Paul -- vote in favor. Sen. Joe Manchin, a West Virginia Democrat, tweeted Monday that he'd support Pompeo as well. And shortly after, Sen. Joe Donnelly of Indiana released a statement supporting Pompeo.

That means even if Sen. Jeff Flake, an Arizona Republican who has voiced concerns about Pompeo, ends up voting no, Pompeo should still be able to win confirmation.

There are two other currently undecided senators who caucus with the Democrats who are viewed as on the fence and possible yes votes: Sen. Doug Jones of Alabama and independent Sen. Angus King of Maine.