Military families caught off guard as thousands of troops are deployed 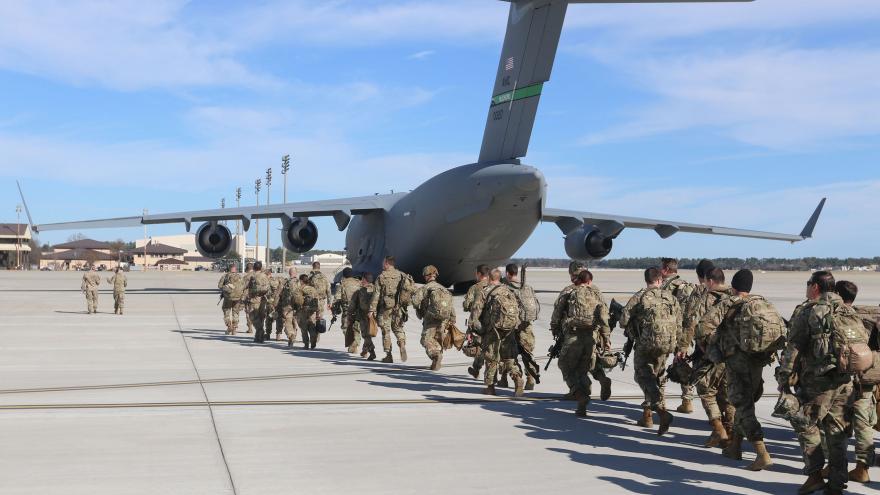 (CNN) -- More than 3,000 service members are set to be deployed to the Middle East as tensions rise following the killing of an Iranian general by the United States.

That means thousands of families -- spouses, children and siblings -- were separated from their loved ones -- some without notice. Many of them are from the Immediate Response Force of the 82nd Airborne Division in Fort Bragg, North Carolina.

The head of Iran's Revolutionary Guards' Quds Force, Qasem Soleimani, was killedFridayby a US airstrike ordered by President Donald Trump.

Here are some families whose loved ones are getting deployed:

Melissa Morales, 18, told CNN her twin sister, Cristina, was back home visiting in Victorville, California, when she was notified Friday she would be deploying Wednesday. Victorville is about 100 miles northeast of Los Angeles.

"She kind of took it as a joke the night before because of the memes on Twitter," Morales said. The hashtag #WWIII was one of the top trends on Twitter heading into the weekend. "She wasn't expecting to be deployed so soon,"

Morales said her sister joined the Army last summer and is now stationed at Fort Benning in Georgia. This will be her first deployment.

"As her twin sister, it kind of hurts. It stings," Morales said on her sister's deployment. "Yeah, I'm obviously sad, but she made me and the rest of family realize it's what she signed up for."

Morales tweeted photos of her sister on her personal account Friday.

"Pray for my sister and every other soldier that has deployed," she wrote.

Morales did not want to publicize her tweet on CNN. She said she tweeted it because of the #WWIII memes to show "there's real people risking their lives for this war."

While the memes are funny, she said, reality hit when her sister received the deployment notification.

"They don't know when they are coming back yet," Brian Knight, operations director for the United Service Organizations at Fort Bragg told CNN affiliate WRAL-TV. "That uncertainty brings a lot of anxiety not only on the family member but the children as well." USO is a nonprofit organization that provides entertainment and programs for service members and their families.

Wife says the worst part is when she can't say goodbye

April Shumard's husband was off for Christmas, but had to leave New Year's Day along with others from the Fort Bragg Immediate Response Force, she told CNN affiliate WNCN-TV. Her husband's birthday was Friday.

"It just happened so fast," Shumard, 42, said. "It happens whenever it's going to happen you can't control it, so I think the worst part of that is when you don't get to say goodbye."

She is in San Diego with her daughter for a medical procedure, the affiliate reported. She relied on friends in Fayetteville -- near Fort Bragg -- to care for her other children since her husband had to leave right away.

"To have your partner be gone and not be able to prepare for it, it's just really hard," she said.

Some military spouses reach out to other families

The spouses who are more experienced with last-minute deployments are reaching out to those who need help.

Sabrina Johannes is an Army wife whose husband served in Afghanistan. She's the executive director of Deployed Love, a community of volunteers at Fort Bragg that are dedicated to making things easier for spouses and children left behind.

"The big white buses they load onto, you can ask my husband, every time I see them now I still hate them," Johannes told CNN affiliate WRAL-TV.

Deployed Love started at Fort Bragg three years ago, organizing holiday parties and outings. They are now a community ran by volunteers who reach out and bring families together while their loved ones are deployed overseas, according to the organization's Facebook page.

"Definitely I've seen a big growth in our community, there's been a lot of people reaching out, asking questions," Johannes said. "Fortunately we have a lot of volunteers who have been there, done that and we have lots of answers and experience to give back to them."