Millions of animals are dying from the Australian fires 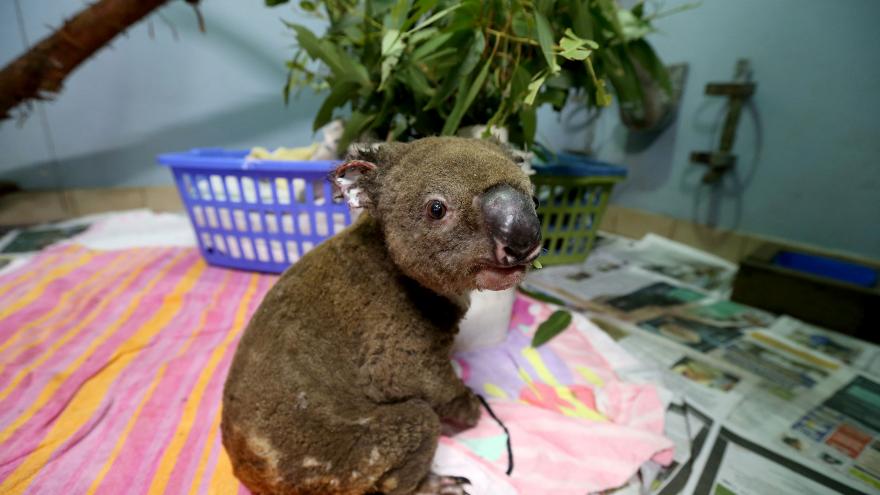 (CNN) -- In a grim video posted on Twitter, a man drives into the fire-ravaged town of Batlow, in the Australian state of New South Wales (NSW). Both sides of the road are covered with ash and lingering smoke. They're also littered with the charred remains of animals killed in wildfires that have ripped through the region.

The blazes, which have been burning across Australia for months, have razed homes and wiped out entire towns. Across Australia, nearly 18 million acres of land have been burned -- much of it bushland, forests and national parks, home to the country's beloved and unique wildlife.

Nearly half a billion animals have been impacted by the fires in NSW alone, with millions potentially dead, according to ecologists at the University of Sydney. That figure includes birds, reptiles, and mammals, except bats. It also excludes insects and frogs -- meaning the true number is likely much higher.

The total number of animals affected nationwide could be as high as a billion, according to Christopher Dickman, the University of Sydney ecologist who led the report.

Fires are nothing new in Australia, but they have been growing more intense and becoming more destructive in recent years, a problem that has been exacerbated by climate change. And animals have been on the front lines -- Australia has the highest rate of species loss of any area in the world, and researchers fear that rate could increase as the fire disaster continues.

"The scale of these fires is unprecedented," said Dieter Hochuli, an environmental sciences professor at the University of Sydney. "There are substantial concerns about the capacity of these (ecosystems) to rebound from the fires."

The team at the University of Sydney came to their conclusion by using estimates of NSW mammal population density in 2007 in order to estimate how many animals have been affected by the 4.9 million hectares (12.1 million acres) that have been set alight in the state this fire season.

It's a pretty good estimate, Hochuli said -- but until the fires stop, they have no way of surveying exactly how many animals have died. And since the density figures excluded some species of bats and frogs, "the true loss of animal life is likely to be much higher than 480 million," said a statement from the university.

Some animals, like koalas and kangaroos, are primarily killed directly by the fires -- for instance, by being incinerated in flames or choking on smoke. Nearly a third of all koalas in NSW have died and about a third of their habitat has been destroyed, federal environment minister Sussan Ley said in December.

Photos from the ground show koalas with singed fur, raw patches of burnt flesh, and blistered paws. Even if they are rescued and treated, sometimes their injuries are simply too extensive to survive.

Wombats have also been hit hard -- they don't cope well with heat or stress, and panic at the smell of smoke. The small, stubby-legged marsupials can't run very fast or far and are largely at the mercy of the flames.

"It's just horrendous," said Graeme Jackson, a NSW resident who has experience raising orphaned wombats. "A wombat can run 30 kilometers (per hour/18.6 mph), he can run that fast (for) short distances -- and then he burns."

Other species don't die from the flames or smoke, but instead from the fire's aftermath. Smaller mammals and reptiles can escape the blazes by burrowing underground or hiding in rocks -- but afterward, there is no food or shelter left, only certain predators that are drawn to fire because they know it brings easy prey.

"The big issue is that feral cats and red foxes hone in on fire front -- they come in and pick off animals, it's an open hunting area," said Dickman, from the University of Sydney.

Koalas and kangaroos are spread out across the country, so they're not in danger of going extinct due to the blazes. But other animals that live in niche environments and have smaller populations may have been wiped out entirely; these include the eastern bristlebird, the mountain pygmy possum and the corroboree frog.

For these species, "if its habitat burns, it's a goner," Dickman said.

Extinction doesn't happen all at once. Each species on Earth has an average of 220 populations, so a healthy species could recover if only a handful of populations die out. But "if you whittle away population after population, then eventually you'll be left with half a dozen, then three, two, then maybe even one population," Dickman said. "Then all it takes is one event and it's gone -- a fire, drought, whatever."

Climate crisis and recovery in a changing landscape

These animals' recovery depends not only on their population size but also on the condition of their habitat. For instance, plants grow slower in high-altitude alpine regions, meaning it could be a very long time before species are able to return.

Sometimes, even if a habitat heals, the animals don't come back. In 1993, a fire in NSW's Royal National Park wiped out the greater gliders -- a type of lemur-like gliding marsupial -- that lived there. "The population is effectively gone," Dickman said.

It's not that animals are unprepared for natural disasters -- they've been dealing with fires for millennia. But human interference has changed everything. We have fragmented natural environments with cities and residential areas, cleared land for our use, and introduced invasive species -- making it harder for native species to recolonize after fires.

Perhaps the most devastating human factor has been the climate crisis, which experts say has made natural disasters go from bad to worse. Australia is experiencing one of its most severe droughts in decades, and a heatwave in December broke the record for the highest nationwide average temperature, with some places sweltering under temperatures well above 40 degrees Celsius (about 113-120 degrees Fahrenheit).

It's gotten so bad that the heat and drought were killing thousands of flying foxes even before the fires began. "They've been falling out of trees in large numbers," Dickman said. Their population is "almost certain" to have depleted further now that fires have burned their habitat.

The depletion of animals and their homes is a vicious cycle; just as animals need habitats to survive, so too do habitats need their animals.

For instance, a type of rat kangaroo called the potoroo is crucial to keeping forest soil healthy. If potoroos are hit by fire, some plant species might be unable to regenerate, which could then kill off other species that feed on vegetation. Ecosystems are built on balance -- once one element is thrown off, everything is affected.

Animal hospitals, zoos, and rescue groups on the ground are doing their best to respond to the fire crisis, with local residents and volunteers pitching in to care for injured animals.

"This is huge because we had a drought before we had this bushfire, so the animals are already undernourished," said Janine Green, a volunteer at WIRES Wildlife Rescue, who rescued a possum with badly burnt paws on Tuesday near the NSW town of Cobargo.

Federal Environment Minister Ley said in December that the government is working with koala experts, and had allocated $6 million Australian dollars ($4.1 million) to establish habitat corridors and a plan for releasing animals that have been in hospitals.

But some fear that unless authorities take decisive long-term action on climate change and animal conservation, the country's wildlife and environment could face a dire future. Australia has more than 300 native species -- and about 81% of them are only found in the country. If they are wiped out here, these rare animals could be gone for good.

"They're not coping, and now they've got no grass, no water, no habitat," Green said. "Who knows if they can breed after this? We've never seen anything like this before."