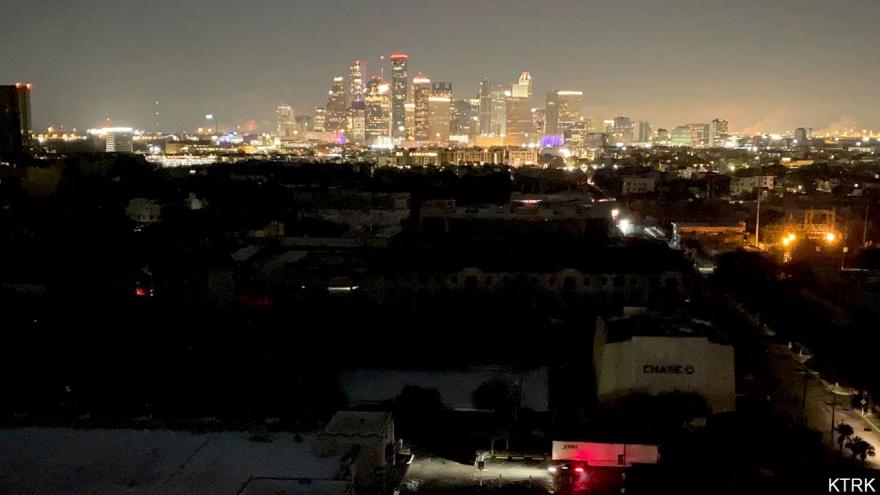 (CNN) -- A devastating winter storm has crippled the power grid in Texas and caused more than 3.4 million outages as of Wednesday morning, leaving much of the state in the cold and dark for several days.

The lack of power has created a widespread emergency, with families huddling in homes or cars without heat, burst water pipes, failing water systems and gasoline shortages.

"We hope the power comes back soon because we are running out of firewood," Barbara Martinez, whose suburban Houston home had been without power since early Sunday, told CNN on Tuesday. "My goal today is to find more firewood."

The outages cover the areas served by Electric Reliability Council of Texas, or ERCOT, from the counties bordering Mexico up to those touching Oklahoma, and from Houston in the east to rural Big Bend in the west. Yet areas outside of ERCOT's coverage zone, including the eastern border with Louisiana and the northwest panhandle, remained relatively unaffected.

Texas officials are turning on the power company and calling for investigations. But ERCOT's CEO Bill Magness said the company's controlled outages, which down power to millions of customers, had in fact averted the system's total collapse.

"I think from the perspective of the grid collapsing, I think what has happened here is a response that kept the grid from collapsing, that kept us from going into a blackout condition," he said. "Now the difficulties that this has imposed on the citizens of Texas, everybody in the state, have been enormous."

The power issues will remain for a while -- especially given that the cold temperatures will last for another day or two.

ERCOT said Wednesday some power generation is slowly returning and they "hope to reduce outages over the course of the day."

Harris County Judge Lina Hidalgo told NBC on Wednesday she expected the issues to last beyond the severe weather.

"Today is going to get a little warmer ... but those power issues, I expect will continue, and that's what I am telling my community," she said. "This agency is saying things are getting better, but they've been saying that for three days. So, right now, I just want to set expectations."

The widespread outages stem from a weather disaster coupled with a challenged infrastructure.

A winter weather system brought unusually frigid temperatures to much of the central US over the weekend, including in Texas, the country's energy leader. The deep freeze caused demand for power and heating to skyrocket even as it knocked out the state's natural gas, coal, wind and nuclear facilities, which were not prepared to function in such cold weather.

Compounding the issue is that Texas's electric system of ERCOT is isolated from the rest of the country, partly as a way to avoid federal regulation. So it cannot simply import power from elsewhere to make up for the shortage.

"When it comes to electricity, what happens in Texas stays in Texas," said Dan Cohan, associate professor of environmental engineering at Rice University. "That has really come back to bite us."

And with temperatures not expected to rise above freezing until Friday, officials worry about how residents will cope without utilities. "I share the frustration of every Texan regarding the loss of power during this winter storm. Millions of people without power during this arctic blast is life-threatening and unacceptable," Lt. Gov. Dan Patrick said.

When asked if leadership of ERCOT should resign, Gov. Greg Abbott said the company had failed.

"They showed that they were not reliable," Abbott said. "These are experts. These are engineers in the power industry. Government has to rely upon on these specialists to be able to deliver in these types of situations."

Meanwhile, many Texans are pinning their hopes of staying warm on backup generators and warming centers.

The city of Waco has made 15 hotel rooms available for six days.

"This is not a sustainable solution but helps keep vulnerable persons from sheltering in single-digit temperatures," Mayor Dillon Meek said.

Weathering the storm without power or water

ERCOT said Tuesday that it is optimistic about power restoration, but Harris County Judge Hidalgo accused the company of overstating the outlook. "The bottom line this evening is, we're in for another long night," Hidalgo said.

"All of our crews are ready to restore power to those affected as soon as we are authorized to do so by ERCOT. We recognize the hardships and understand why customers are frustrated," Austin Energy said.

Loss of power and failure of backup generators also cut availability of water. Fort Worth Mayor Betsy Price told CNN on Tuesday evening she had been without power or water for around 38 hours.

"If people have neighbors that they know don't have heat and maybe they do, (then) offer to take them in. Let's watch out for each other. Let's try to do the right thing by helping, share what we have," the mayor said.

Galveston said most residents had low or no water pressure due to water line breaks and failures, and the city's water supply is "critically low."

Houston said early Wednesday it is struggling to supply water.

"The City is working very hard to maintain water pressure but it is becoming increasingly difficult. There are 2 requests: please do not run water to prevent pipes from freezing and turn off water if pipes have burst," Houston Mayor Sylvester Turner said in a tweet Tuesday.

Emergency officials have been inundated with calls, and San Antonio Fire Chief Charles Hood told CNN he expected Tuesday night to get worse. "We're looking at some more rain and sleet tonight," Hood said. "This could be the worst night as far as temperature."

To stay warm, many people turn to unconventional heat sources such as stoves, grills or gas generators -- which raises the risk of carbon monoxide poisoning.

Carbon monoxide is a gas that has no odor, color or taste. It can be extremely dangerous and even fatal.

In Harris County, 14 residents have been taken to the hospital with carbon monoxide poisoning and seven of those were children, according to a tweet from the Cy-Fair Fire Department.

The Houston Fire Department has responded to 56 fire calls and over 90 calls for carbon monoxide poisoning, Chief Samuel Peña said in a news conference.

"It is critical that you understand the dangers of using open flames inside your homes to try to heat up your homes," Peña said.

Houston officials said Tuesday a woman and girl died from carbon monoxide poisoning after trying to stay warm using a car in a garage.