Millions remain in the path of a large-scale winter storm 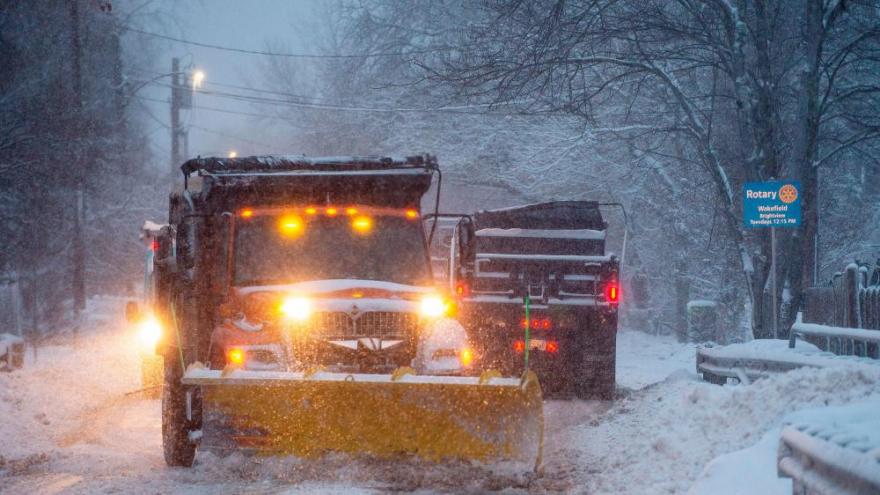 (CNN) -- Heavy snow will fall across the Midwest as tens of millions remain in the path of a dangerous winter storm through the weekend.

Two-thirds of the US is being affected by this storm, said CNN meteorologist Monica Garrett. On Saturday, significant snow is forecast to fall in much of the Midwest, Ohio Valley, the Northeast and New England. Snow totals of six to 12 inches are possible, according to the National Weather Service.

"This storm will produce a widespread foot print of heavy snows from the Upper Mississippi Valley, across the Great Lakes, northern NY State into central to northern new England with snow totals in the 6 to 12"+ range possible," the weather service's Weather Prediction Center stated in their forecast discussion.

Ice prompted a temporary closure at Kansas City International Airport in Missouri on Friday, where a plane slid off the runway while taxiing from the airport terminal, an airport spokesman said. There were no known injuries.

In Guymon, Oklahoma, the ice was so slick that resident Kassidy Stroup couldn't stand up in her driveway. She shared a video of her futile struggle to open the door to her truck as she slid this way and that on the icy path.

Stroup planned to head into work later, she told CNN, after the ice had thawed a bit.

Jenni Pittman, a science and operations officer at the National Weather Service, posted to Twitter Friday a time-lapse video of icicles forming on the eave of her home's roof in Olathe, Kansas.

Pittman was teleworking, she said, but her husband said the roads were "just barely passable."

Timing and impacts through the day

The snow should wrap up for the Midwest by early afternoon. Much of Minnesota, Michigan and Northern Iowa could be left with a foot of snow.

Eastern cities like New York, Boston and Philadelphia will get a quick shot of snow during the afternoon.

"This will be another tricky forecast for the big cities along the I-95 corridor," says CNN meteorologist Taylor Ward.

Precipitation will begin as snow on Saturday before warmer air brings a transition to rain.

"New York City and Boston will likely see 2 to 4 inches of snow before everything ends as rain Saturday night and early Sunday," says Ward.

Areas farther inland have a better chance of remaining in the snow and will likely see slightly greater amounts.

Interior portions of the Northeast could see 8 to 12 inches for upstate New York and up to 6 inches in northern Maine.

Parts of the Ohio Valley could be left with a severe coating of ice. Up to a quarter-inch of ice could accumulate in places like Indianapolis, St. Louis, and Cleveland.

Washington, DC, could even get a little glazing of ice before changing over to rain.

Get the latest extreme weather news

Expect significant travel headaches in the snow-impacted areas. Flights will be delayed or even canceled, so check with your airlines before traveling.

Airports like Chicago, New York and Boston could be affected the most by Saturday's weather.

Road travel will be treacherous as well. Windy conditions will create blowing snow and near-whiteout conditions in some of the hardest-hit areas across the Midwest.

"Winds across these regions may gust to over 50 mph, producing considerable blowing and drifting of snow and life-threatening travel conditions," according to the weather service.

Behind the system, bitterly cold temperatures will settle in for the end of the weekend and start of the week.

"After the storm moves out, the bitter cold will settle in. High temperatures in the region will remain in the single digits Sunday and into the early part of next week, while overnight temperatures will dip to 10 to 20 degrees below zero," says Ward.