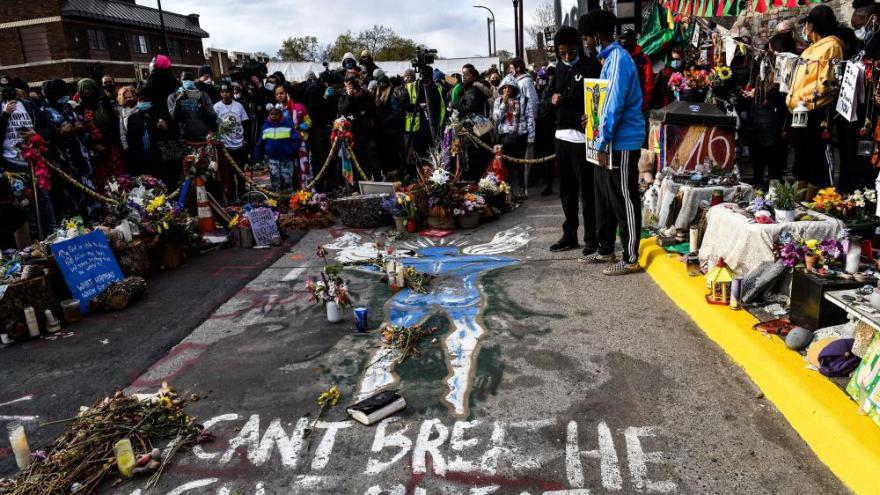 People gather at George Floyd Square after the verdict was announced in the trial of former police officer Derek Chauvin in Minneapolis, Minnesota, on April 20. Portions of the memorial were being removed by city workers June 3, Minneapolis City spokesman Sarah McKenzie said.

(CNN) -- Minneapolis city workers early Thursday removed parts of a memorial at the intersection where George Floyd took his final breaths, as the city stated its plans to create a permanent memorial and reopen the area to through-traffic.

On Thursday morning, multiple workers could be seen moving cement barricades in the intersection of Chicago Avenue and 38th Street with tractors and trucks.

"Barricades have been removed so that ultimately (the intersection) will be reconnected into the neighborhood and traffic will be able to resume," city spokeswoman Sarah McKenzie told CNN. "This intersection will never go back to 'normal.' This city is really doing everything it can with the community to preserve as many art pieces as possible."

McKenzie emphasized that this is a community-led effort being done in coordination with the Agape Movement group. Some artifacts, like the iconic fist sculpture in the center of the intersection, will remain, she said.

The reopening of 38th and Chicago was a planned "community led effort," Minnesota Gov. Tim Walz said during a news conference Thursday.

"There's conversations happening in and around that area with a respectfulness to the nature of the spot where George Floyd died, but also understanding that public infrastructure needs to be opened back up in a way that works," Walz said.

Steve Floyd, the co-Founder of Agape Movement, an organization that worked with the city for reopening, said that the memorial has not changed, but the barricades were removed to allow traffic through.

Shortly after the removal, some activists again blocked the intersection. In a press conference Thursday afternoon, Mayor Jacob Frey said the city workers' efforts were just the first step in a "phased reconnection" of the intersection, and he acknowledged that it will be some time before the intersection is open to traffic for good.

"We recognize that a full reconnection is not going to happen at once," he said. "I acknowledge that it will be a bit touch and go and difficult over the next several days. The good news is that we've got some extraordinary on-the-ground leadership in Agape that will be continuing to do some great work along those corridors to make sure that, yes, we can move toward ... reconnection of these neighborhoods."

The removal comes amid a tense disagreement over what to do with the intersection just over a year after Floyd, a 46-year-old Black man, died on the asphalt while being restrained by three Minneapolis Police officers. One officer, Derek Chauvin, was convicted of two counts of murder and one count of manslaughter in April.

The intersection has been closed off to traffic for over a year and has become a shrine and memorial to Floyd. In September, the Minneapolis City Council unanimously voted to approve changing the name of the intersection to George Floyd Square.

"It's time for us to begin the process of rebuilding this community to create the kind of memorial that is worthy of the life of George Floyd and so many other people who have lost their lives to the hands of the state, a center for racial healing, a center for social justice, a center for reckoning with the deep and systemic challenges that we face in this country and certainly in this city," Jenkins said.

With distrust of the police still high, some residents have taken over security as self-appointed "guardians" of the area. Still other nearby residents and business owners say the lack of a police presence has made them feel unsafe.

The intersection has also been the site of recent violence. One person was shot dead there in March, and last week a person was shot a block away on the one-year anniversary of Floyd's death.

Local activist says city did not notify them

In a statement Thursday, city officials said Minneapolis plans to create a lasting memorial at the intersection.

"We are collectively committed to establishing a permanent memorial at the intersection, preserving the artwork, and making the area an enduring space for racial healing," the statement, obtained by CNN affiliate WCCO, said.

"Alongside City leadership, we have met on a regular basis with community members to discuss both the short-term path toward reconnecting this area and the long-term plan for the neighborhood with sustained investments to help restore and heal the community," the statement said.

Mayor Frey said the city decided to clear the square early Thursday morning to avoid a confrontation with the activists who have controlled the intersection.

Still, Jeanelle Austin, a resident who has worked to preserve the artwork in George Floyd Square, said the city did not notify them despite previously telling volunteers they would be told before it happened.

"We didn't know that today would be the day that the streets would be reopened," Austin said through tears during a community press conference Thursday. "The city told us that they would let us know in advance. That didn't happen."

"All we asked for was some restorative justice that the trauma the community endured, that the harm would be repaired prior to the reopening of the streets. But instead, we were met with more trauma this morning," she added.

Austin said her group of volunteers were met with "more pushback than help" from the city. She said she doesn't know what is next but does know that she and others in her city "will continue to fight for justice."

"We will continue to stand for our liberation and our community," Austin said.

Jaylani Hussein, executive director of the Council on American-Islamic Relations Minnesota, said the city's actions are attempts to erase the community's pain.