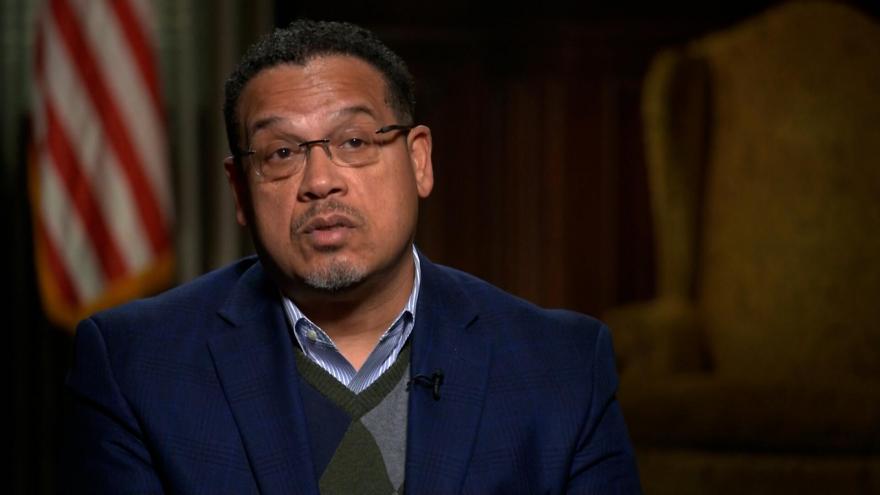 (CNN) -- Keith Ellison said Derek Chauvin being found guilty in the murder of George Floyd last week was just the first victory in a long road to racial justice and police reform.

In an interview with CNN's Omar Jimenez on Monday, the Minnesota Attorney General said he recognized the significance of this case.

"I'm very well aware that the case had implications outside the court room and that was really looked at as referendum on where America was going to go with regard to policing," he said.

After all, he said he remembers how deflated and cynical he felt after the acquittal of the officers who beat Rodney King in the 1990s. And even further than that, he cited the Kerner Commission, which essentially diagnosed the issue of policing in America in the 1960s, to show how long there's been a strained relationship between Black people and police.

"This goes back," he said. "This is a problem that's really crying for a solution and it really needs presidential attention."

Ellison said the Chauvin trial was just the first step.

"We had a good first quarter, but we gotta get out there and achieve justice every quarter," he said.

The people made a difference

Witnesses like Charles McMillian, who cried during his testimony, and Darnella Frazier, who is credited with recording the viral video of George Floyd's death, helped Ellison understand that "people are good," he said.

"They were the real heroes of that day," he said. "They stood up, they said the truth, they came to court, they gave their testimony and it was amazing."

"It really restored my faith in humanity," he added.

What Ellison will remember most about this trial and historic moment in America is Floyd's family, "their dignity, how beautiful they were, how kind they were."

Ellison said he will also remember the people who changed him.

"I think I'm going to remember the courage of those people who stopped for a complete stranger," Ellison said. "No one on that scene knew George Floyd, but they all stopped and did what they could for him."

Accountability was achieved, the goal now is justice

"Justice implies true restoration," Ellison said. "But it is accountability, which is the first step towards justice, and now the cause of justice is in your hands."

On Monday, he told CNN that justice means his son "can walk the streets without fear."

"Justice means that we can truly have public safety and civil and human rights together, at the same time," Ellison said. "That's going to be more than one case."

Ellison admitted it is incredibly important to ensure that each case of police misconduct is handled with the same tenacity as the Chauvin case.

There are still many people who don't want to call the police department because they're afraid that bringing the police into a situation may make it worse, Ellison said, and that needs to be addressed.

"This is a tremendous cost to society, that loss of trust," he said."It's fundamental to democracy, it's fundamental to the idea of whether we have human rights for everyone. We say 'liberty and justice for all' at the end of the Pledge of Allegiance and we mean it. But you've got to put something behind that."

A big part of addressing police reform lies in the hands of the nation's lawmakers, Ellison said.

"We need to past George Floyd Justice in Policing Act," Ellison said.

The bill, authored by Democratic Rep. Karen Bass of California, aims to prevent police misconduct by setting up a national registry of police misconduct to stop officers from evading consequences for their actions by moving to another jurisdiction. It would ban racial and religious profiling by law enforcement at the federal, state and local levels, and it would overhaul qualified immunity, a legal doctrine that critics say shields law enforcement from accountability.

The bill passed the House without any Republican support in March. Bass said the goal is to have a deal "by the time we hit the anniversary of Floyd's death," on May 25.

"We need a system of registration and documentation. We really should know how many people die in deadly force encounters with the police," Ellison said.

The continuing conflicts between the police and the communities they serve "have got to come to come to an end," Ellison said. "This is the president's business."