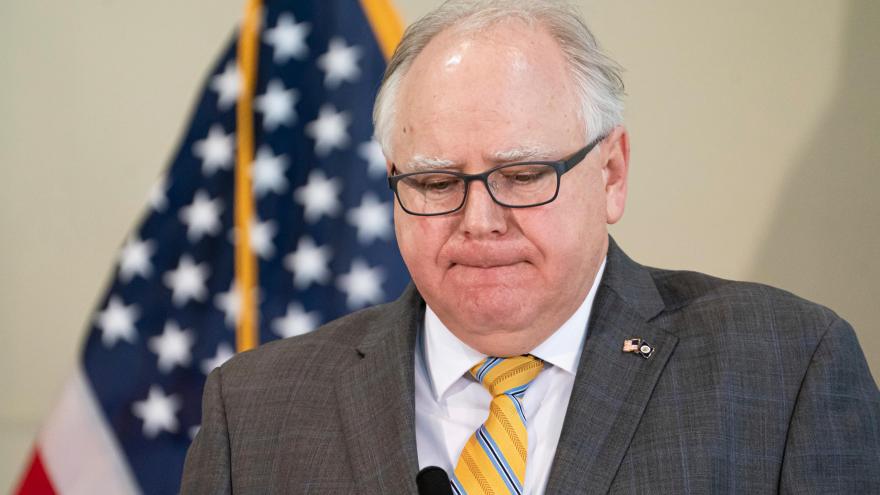 Minnesota Gov. Tim Walz pauses during a news conference Friday, May 29, 2020, in St. Paul, Minn., as he talked about the unrest in the wake of the death of George Floyd while he was in custody of Minneapolis police. Credit: Glenn Stubbe/Star Tribune/AP
(CNN) -- Minnesota Gov. Tim Walz appeared before reporters after nights of unrest in the Twin Cities to deliver a clear message: He was taking control.

In a sweeping news conference Friday, Walz acknowledged the pain African Americans felt after George Floyd died as Minneapolis police officer Derek Chauvin knelt on his neck. Amid complaints that he should have acted earlier in the week, he said he was taking control away from local officials, and asked for black residents' help restoring order after rioters set Minneapolis' third precinct police headquarters ablaze Thursday night.

But hours later, in the first full night after Walz had deployed the National Guard, it was unclear whether any control had actually been imposed in the tense Twin Cities.

Another night of protests raged on and expanded into other cities across the nation. Caravans of protesters on foot and in cars ignored local curfews, with some gathering in areas unpatrolled by police or National Guard members. The property damage and fires that occurred Thursday night in Minnesota took place in other cities, including Atlanta.

Walz and the mayors of Minneapolis and St. Paul said Saturday morning that the vast majority of those who were arrested Friday night were outside agitators who were not from the Twin Cities region. Walz called those people a group "bent on adapting their tactics to make it as difficult as possible" to maintain order.

"Let's be very clear: The situation in Minneapolis is no longer in any way about the murder of George Floyd. It is about attacking civil society and stealing beer and disrupting our great cities," Walz said.

He said he had mobilized more than 700 National Guard soldiers on Friday night, and that after television cameras found large gatherings of protesters with no police presence at all, he was authorizing the head of the state's National Guard to fully mobilize on Saturday.

Walz acknowledged questions about where police and firetrucks were Friday night, saying that "the situation was so broad and the tactics were so bent on causing destruction" that resources were spread thin.

It all came less than 24 hours after Walz, in a Friday news conference, had sought to assure Minnesotans that he was in control.

During his news conference, Walz admonished President Donald Trump for tweeting that "when the looting starts, the shooting starts" -- a phrase that was widely read as potentially inciting violence toward protesters. Walz said that "in a moment that is so volatile, anything we do to add fuel to that fire is really, really challenging."

And he apologized to CNN after a reporting team covering the situation in Minneapolis was arrested early Friday morning. "That falls squarely on me," Walz said.

Walz, a 56-year-old first-term Democratic governor who was elected in 2018 after 12 years in Congress, is the latest governor to step into the national spotlight amid a crisis in his state and a cultural clash with Trump. And the political fallout from Floyd's killing and the subsequent protests in Minnesota could be far-reaching as the 2020 swing state faces a new crisis that could compound the coronavirus pandemic.

Walz and Trump spoke by phone Thursday night, after Walz had dispatched hundreds of National Guard soldiers to Minneapolis and the surrounding areas.

As buildings were burned in protests unfolding in Minnesota, Trump tweeted in the wee Friday morning hours that "THUGS" were dishonoring Floyd's memory and that he had told Walz he had the military's support. "Any difficulty and we will assume control but, when the looting starts, the shooting starts," Trump tweeted.

Trump's tweet became a flashpoint, deepening right-wing animosity toward the social media company as the President's words were rebuked by Democrats.

In a stark departure from Trump's approach, Walz said Friday morning that Floyd joins a long line of African American victims of police brutality, including Rodney King in Los Angeles and Michael Brown in Ferguson, Missouri.

"These are things that have been brewing in this country for 400 years," he said.

Walz added of Floyd: "And thank God a young person had a camera to video it."

Chauvin was arrested and charged with third-degree murder and manslaughter Friday. Three other officers who were involved in the arrest that led to Floyd's death have been fired. And the mayors of Minneapolis and St. Paul imposed curfews for over the weekend, though on Friday night those restrictions appeared to be largely ignored and unenforced by police.

Walz has faced criticism for failing to deploy the state's National Guard and use emergency powers sooner.

At his Friday morning news conference, Walz faced questions over why he hadn't acted as forcefully earlier in the week.

Later in the day, Senate Majority Leader Senator Paul Gazelka, a Republican, lambasted Walz, calling his inaction until late Thursday "a failure of leadership" that shifted focus away from obtaining justice for Floyd's killing.

"Instead, it's the city up in smoke because the governor didn't take the right action," Gazelka said.

"He needs to be responsible for this, not just from today moving forward, but from the beginning as all this unfolded," he said. "To watch our cities burning -- there's no excuse for that."

Walz acknowledged that questions about his early inaction were a "valid critique." But he also said he worried that sending an additional police presence into a community that was already protesting police violence would further inflame tensions.

He said he had been deferring to local mayors and police, until it became clear Wednesday night that rioting had grown beyond their control.

"If the issue was that the state should have moved faster, that is on me," Walz told reporters Friday.

Walz and Minnesota Attorney General Keith Ellison, a long-time ally of Vermont Sen. Bernie Sanders and former deputy chair of the Democratic National Committee, on Friday sought to emphasize differences between the Minneapolis Police Department and the state's National Guard.

Walz said there is "no trust" in Minneapolis police -- but that the National Guard had been sent in to help.

"The very tools that we need to use to get control, to make sure that buildings aren't burned and the rule of law collapses, are those very institutional tools that have led to that grief and pain," Walz said. "I understand clearly there is no trust in many of our communities, and the differentiation between the Minneapolis Police Department that we witnessed losing trust of those they are there to serve is very difficult for people to make."

"Don't react to them the way you might react to the Minneapolis Police Department. It's not the same group," Ellison said.

Walz was also forced to explain Friday why early in the morning, state police had arrested CNN correspondent Omar Jimenez and his team covering the protests.

"This is a very public apology to that team. It should not happen," Walz said.

He said journalists will play a crucial role as Minnesota seeks to rebuild trust between communities of color and police.

"Please show the world everything that's happening here," he said, "through that lens of professional journalists who ask the questions you're asking today."