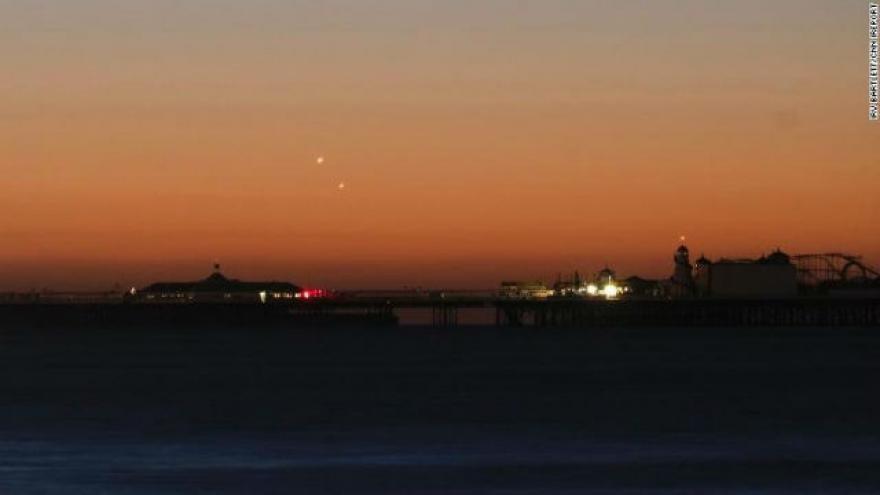 (CNN) -- Jupiter and Venus are really far apart. Hundreds of millions of miles apart. But to early risers Monday morning, it looked like the two brightest planets in the solar system were almost on top of each other.

It was a rare -- and stunning sight.

NASA's Jet Propulsion Laboratory says that at their closest point, the planets were 0.3 degrees apart. That's smaller than the diameter of the full moon.

If you missed this stunning early-morning planetary display, don't fret it. You'll get another chance Tuesday about 45 minutes before sunrise. One caveat: They won't be as close to each other.

The phenomenon is called a conjunction. It's not uncommon, but it's rare to see them so close. "The planets will appear to move past each other forming what looks like a brilliant double star," NASA said in a video touting the event.

In southeastern Spain, Néstor Mateos Ramos filmed the planets for 7 minutes and then sped up the video to show their path through the sky.

Photographer Irv Bartlett got these photos of the planets over the Palace Pier in Brighton, United Kingdom.

Astronomy photographer Alan Dyer was also up before dawn to see the conjunction over southeastern Alberta, Canada.

Because the two planets are so bright, you can see the display with your naked eye -- but you do need to be careful not to stare into the sun as it rises.