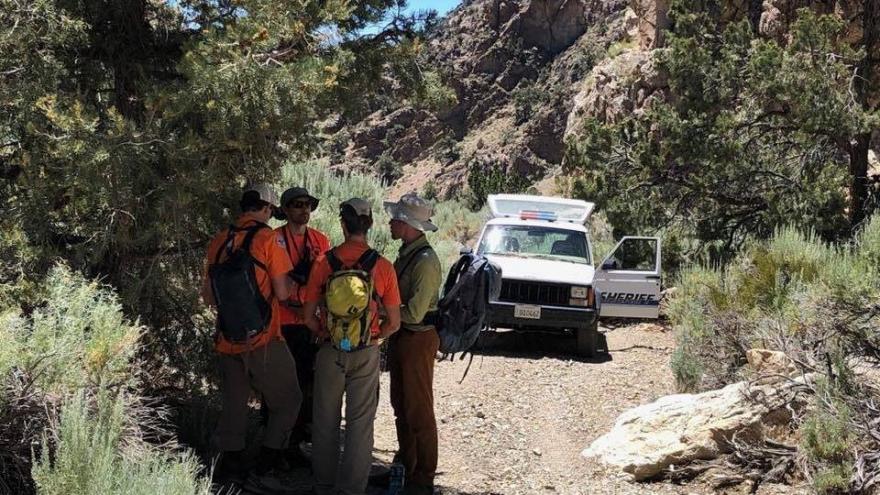 Assembling before the search begins at Grandview Campground.

(CNN) -- Crews found a Southern California woman and her dog after a four-day search Monday.

Sheryl Powell, 60, of Huntington Beach, disappeared Friday near the Grandview Campground in the Bristlecone Pine Forest area of Inyo National Forest after taking the family dog for a bathroom break while her husband moved their Jeep, according to the Inyo County Sheriff's Office.

Authorities first found Powell's dog, Miley, about 2.5 miles away from where Powell was last seen. It was then reported that Powell was found alive by ground search team members near the Montenegro Springs area, which is below where her dog was located earlier.

She was taken to an airport where an ambulance took her to a local hospital for medical clearance, according to the Sheriff's Office.

"She's so strong," he exclaimed through tears.

Greg says he believes she was threatened by someone, which led her to run down the hill where she got lost.

Powell's daughter, Farrah, told CNN affiliate KTLA that Powell did not have food or water with her when she went missing.

The Sheriff's Office described Powell as "resilient and strong but exhausted after being lost in an extremely remote area above Big Pine, [California]."

"We are beyond grateful for the continued support from her family, local residents, visitors, and the media. We also cannot thank our assisting agencies enough for their amazingly hard work in difficult terrain throughout this 4-day search," the Sheriff's Office posted on their Facebook page.

During the search, Powell's daughter, Farrah, told CNN affiliate KCBS the possibility of her mother getting abducted rather than lost or just being out in the wilderness seemed "more unlikely" with each day.

"Every day gets harder and harder," Farrah said. "I go through periods where I almost lose hope and I break down into tears and I can't get my mind off all these potentially horrible things that could be happening."

Grandview Campground, found at 8,600 foot elevation and more than 300 miles northeast of Huntington Beach, has no intrusive city lights making it a "popular site for star gazers and astronomy groups," according to the Inyo National Forest website.

The campground has 23 sites, which are flat, sandy and shaded, distributed along two roads. The town closest to the campground is Big Pine, California, which is located about 50 miles from the Nevada border.