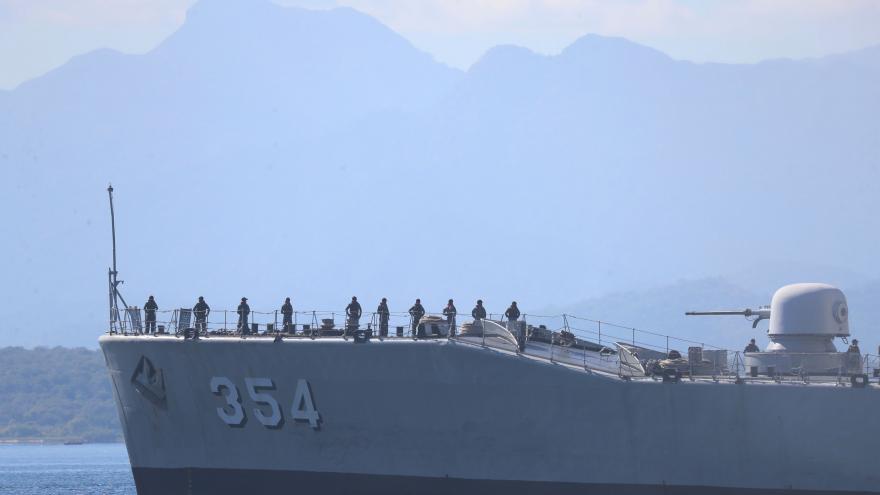 By Masrur Jamaluddin for CNN

(CNN) -- Indonesia's Navy changed the status of its missing submarine from "sub miss" to "sub sank" on Saturday, as a naval chief presented debris believed to be from the vessel at a news conference.

Authorities now expect to carry out an evacuation process to recover the KRI Nanggala-402 submarine and its crew when they pinpoint its exact location, Indonesian Navy Chief of Staff Yudo Margono said.

The latest update came as hopes faded for the 53 crew members, who were expected to have run out of oxygen early on Saturday. So far, no sign of them has been found, Yudo said.

Some warships deployed to the Bali Sea, where the submarine was last contacted Wednesday, will be used to help find the vessel by detecting metal or magnetic objects in the sea, Yudo said.

Yudo said an explosion was not believed to have occurred on the submarine but that heavy pressure on the vessel likely created a crack through which some items escaped.

Six pieces of debris believed to be from the submarine were presented to journalists at the news conference. The items were found about two miles from the spot where the submarine started to dive before it went missing, Yudo said, and included a bottle of grease, part of a torpedo launcher, part of a metal tube, prayer mats and fuel.

The debris was found floating at a location where the sea is 850 meters (930 yards) deep, he said, which would make a possible evacuation very "difficult."

Authorities said earlier the submarine could not survive at depths beyond 500 meters.

People who were on a previous mission on the KRI Nanggala-402 submarine confirmed that some of the debris belonged to the submarine, the navy chief of staff said. The bottle of grease matches what the crew would use to lubricate the submarine's periscope.

The father of one of the missing submariners, 48-year-old Sunaryo, said he and his wife were shocked and saddened by the news that debris had been found but still hoped the navy could find their son, Gunadi Fajar Rahmanto, 28, safe and well.

"I still believe that they can find my son. No matter what, the evacuation process should keep carry on, until my son and other crew can be found," Sunaryo, from a small village in the Yogyakarta area, told CNN.

Sunaryo said his wife Sumiyati, 47, was tearful and concerned for her daughter-in-law, who is seven months pregnant. Gunadi's wife plans to return to her hometown in Central Java because she wants to give birth in her parents' house, he said.

Gunadi, who holds the rank of ordinary seaman, joined the Navy seven years ago and was later assigned to the submarine. He last met with his parents on March 29, when Gunadi said farewell before embarking on another sailing. "I simply said, be careful," Sunaryo said.

He implored the Navy not to end its search and said he was counting on updates from his son's naval colleagues. "Gunadi and all the crew should be found, at all costs. He is a good son," he said.

Indonesia military commander Air Chief Marshal Hadi Tjahjanto said in a statement that he was "deeply concerned" about the fate of the 53 crew members aboard the submarine. "We are all having a big loss because of this," he said, as he asked "for the prayers of all Indonesian people."

Indonesian search teams said Friday they had identified an area where the submarine could be located.

The area of interest is about 40 kilometers (approximately 25 miles) north of Bali, where oil had been spotted on the surface of the water near the dive point, and where an object likely to have come from the submarine was detected, according to Maj. Gen. Achmad Riad, the head of the military's central information unit.

A naval vessel detected an object with "strong magnetic resonance" at a depth of 50 to 100 meters (164 to 328 feet), Riad told a news conference Friday, and the navy expects its warship, the Rigel, to reach the search area Friday.

The Rigel is equipped with sonar, which uses sound waves to locate objects, and the navy hopes it can find the KRI Nanggala-402, a German-made submarine which lost contact during a military exercise in the Bali Strait early on Wednesday morning.

"HMA Ships Ballarat and Sirius, both presently at sea on separate regional deployments, are making best speed for the search area," Australia's Defense Department said in a press release Friday.

Rear Adm. Mark Hammond, of the Australian task force, added that his thoughts were with the submariners of KRI Nanggala, their families and the Indonesian people. "As always, we stand ready to assist our fellow mariners in the Indonesian Navy," he said.

The United States is also sending aircraft to assist in the search for the missing submarine.

Three C-17 aircraft were expected to depart Dover Air Force Base Friday with watercraft and underwater search and rescue gear.