Mississippi governor declines to rule out contraception bans, saying his state 'isn't presently focused' on it 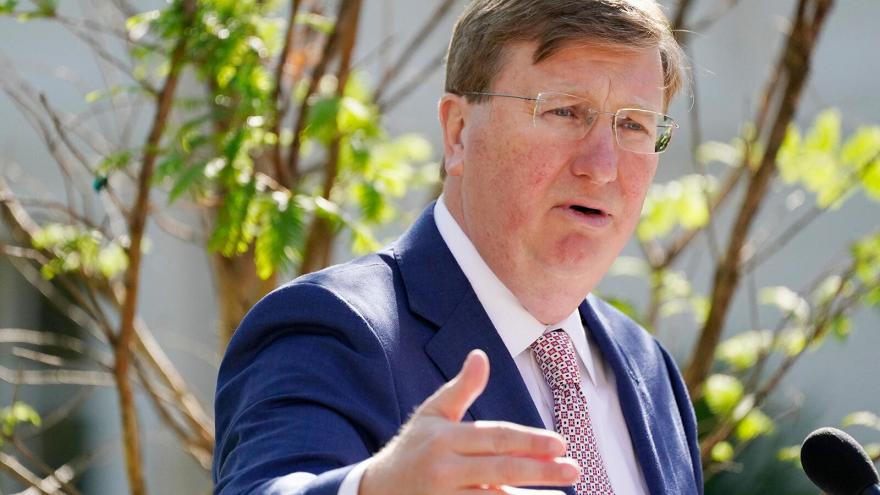 Mississippi Republican Gov. Tate Reeves hedged when asked if his state would consider banning certain forms of birth control if the Supreme Court overturns Roe v. Wade, only offering that it's "not what we are focused on at this time."

(CNN) -- Mississippi Republican Gov. Tate Reeves on Sunday hedged when asked if his state would consider banning certain forms of birth control if the Supreme Court overturns Roe v. Wade, only offering that it's "not what we are focused on at this time."

"And while I'm sure there will be conversations around America regarding [birth control] it's not something that we've spent a lot of time focused on," Reeves told CNN's Jake Tapper on "State of the Union" when asked if his state would consider targeting intrauterine devices and Plan B -- amid some Republican calls to ban forms of birth control. During an interview on NBC's "Meet the Press" later Sunday, Reeves said he didn't think future Mississippi legislation would "apply to those that choose to use birth control."

His comments come against the backdrop of rising concern among abortion rights activists after Politico last week reported on a draft Supreme Court majority opinion that would strike down Roe v. Wade. The opinion is not final, and it is possible the vote count will change before a formal opinion is later rolled out, likely by the end of June.

But already, lawmakers in both red and blue states are beginning to draw new battle lines in expectation of a patchwork system where abortion rights are no longer protected nationwide.

Mississippi is one of 13 states that has passed a so-called "trigger" law poised to go into effect almost immediately if Roe v. Wade is overturned. The state's law says that within 10 days of the state attorney general confirming Roe has been overturned, abortions are prohibited in the state. Limited exceptions are provided in cases of rape or when the procedure would preserve the mother's life.

Mississippi passed a separate 15-week abortion ban in 2018, which is the source of the case currently in front of the Supreme Court.

At the federal level, Senate Democrats plan to bring to the floor this week legislation to codify abortion rights. The bill, known as the Women's Health Protection Act, is not expected to pass since it would need at least 60 votes to overcome a GOP filibuster. In the evenly divided Senate, that would require 10 Republican senators to vote for the measure, even if all Democrats voted in favor.

Celebrated by supporters of abortion rights and long reviled by critics, Roe v. Wade was decided in 1973 establishing a constitutional right to abortion before fetal viability, which most experts say occurs now at around 23-24 weeks of pregnancy.

Overturning Roe would be the culmination of a decades-long project of the conservative legal moment.

"Every one of us is standing up, speaking out, rallying, marching, talking to our constituents, lifting up their voices and their stories," Democratic Sen. Kirsten Gillibrand of New York told Tapper on Sunday. "This is the biggest fight of a generation."