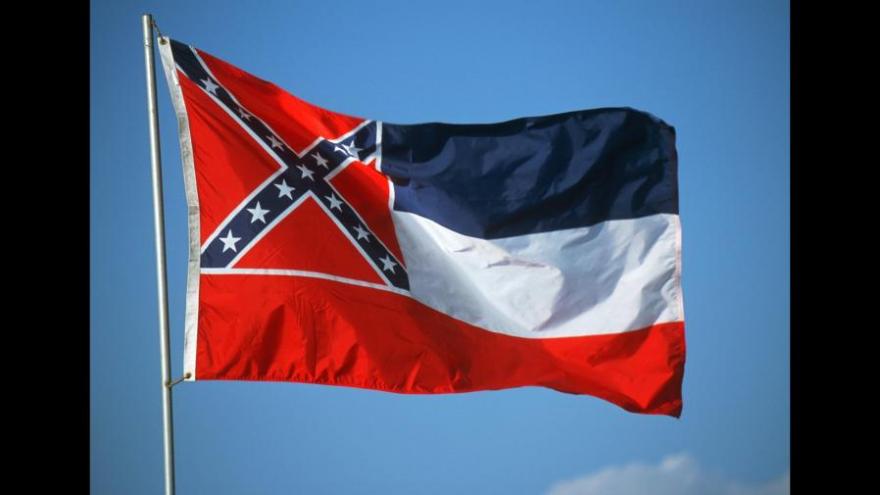 The Mississippi State House passed a resolution on Saturday that will begin the process to change the state's flag.

(CNN) -- The Mississippi state legislature -- both the House and Senate -- passed a resolution on Saturday that will begin the process to change the state's flag.

The newly passed resolution suspends the rules so that lawmakers can consider a bill that would change or remove the flag. First, the Mississippi House of Representatives passed the measure in a vote of 85-34 amid loud cheers in the chamber, followed by the Senate in a vote of 36-14.

The passage of the measure in both chambers now leads the way for a bill to be proposed and passed to allow for the change of the state flag. The bill is expected to be taken up on Sunday afternoon, when both the House and Senate go back into session.

Mississippi lawmakers in recent weeks have been weighing removing the Confederate battle emblem from the state flag amid the continued racial justice protests.

State Rep. Jeramey Anderson, a Democrat from Moss Point, applauded passage of the resolution by House legislators, saying, "changing the flag is long overdue." Anderson also said, "This is a unique opportunity, one we should not squander."

In his Saturday statement, Anderson said that a bill dealing with flag design is expected to be introduced in the House soon. Prior to the vote on the Senate floor, it was stated that one of the provisions is that the new flag include "In God We Trust."

Following the votes, Jefferson Davis' great-great-grandson, Bertram Hayes-Davis, agreed with the potential change of the Mississippi flag, saying that the "battle flag has been hijacked" and "does not represent the entire population of Mississippi."

"It is historic and heritage-related, there are a lot of people who look at it that way, and God bless them for that heritage. So put it in a museum and honor it there or put it in your house, but the flag of Mississippi should represent the entire population, and I am thrilled that we're finally going to make that change," Hayes-Davis told CNN's Ana Cabrera on "Newsroom" Saturday.

Earlier on Saturday, Mississippi Gov. Tate Reeves, a Republican, said in a tweet that he would sign a bill to remove Confederate imagery from the state flag if the legislature sends him a bill this weekend.

"The legislature has been deadlocked for days as it considers a new state flag. The argument over the 1894 flag has become as divisive as the flag itself and it's time to end it. If they send me a bill this weekend, I will sign it," Reeves said.

"We should not be under any illusion that a vote in the Capitol is the end of what must be done — the job before is us to bring the state together and I intend to work night and day to do it," Reeves said.

"It will be harder than recovering from tornadoes, harder than historic floods, harder than agency corruption, or prison riots or the coming hurricane season — even harder than battling the Coronavirus," he added.