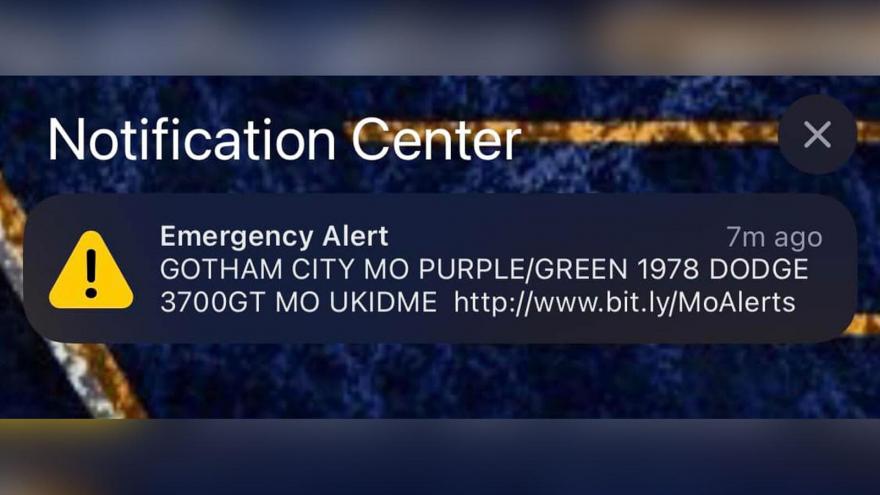 The Missouri State Highway Patrol says this message was sent by mistake during a routine test.

(CNN) -- The Joker is not on the rampage in Missouri, but it looks like authorities there are ready for the "Batman" villain.

An emergency alert mistakenly sent to mobile devices Tuesday by the Missouri State Highway Patrol asked residents of Gotham City to be on the lookout for a purple/green 1978 Dodge 3700 GT. The sedan, with license plate "UKIDME," sounds a lot like the cars used by the Joker's goons in the 1989 Batman movie.

It turns out there is no Gotham City in Missouri, and the message was sent in error during a test -- apparently by someone with an impressive knowledge of the vehicles used in the movie that pits characters played by Michael Keaton and Jack Nicholson.

"This was meant to be a test message, THERE WAS NO ALERT," the law enforcement agency soon posted on social media. Similar errors by other public agencies sometimes have sparked real concern -- and also gotten corrected quickly.

Missouri State Highway Patrol had been conducting "a routine test of Missouri's Blue Alert system" when the message was sent to wireless devices around the state, the agency said in a news release.

"The Patrol regularly tests the Blue Alert system to ensure it works properly when needed. During the test, an option was incorrectly selected, allowing the message to be disseminated to the public," the release said.

The Blue Alert system is designed to quickly spread information about "violent offenders who have killed, seriously injured, or pose an imminent and credible threat to law enforcement," according to the highway patrol.

Last year, authorities in Chile mistakenly sent a tsunami evacuation warning following an earthquake. And in 2018, residents and tourists in Hawaii were terrified by a text warning of an incoming ballistic missile that turned out to be a false alarm.