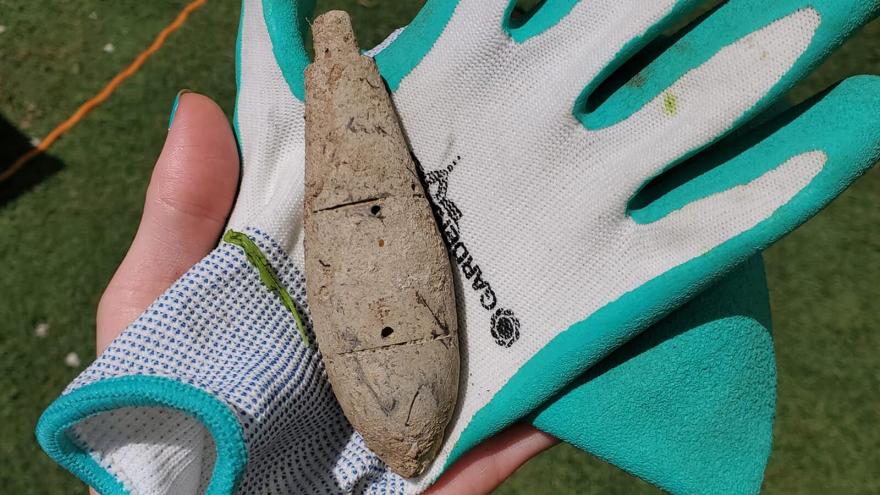 Pamela Coffey holds the object she found while working in the yard.

(CNN) -- A Missouri woman found more than weeds poking out of the soil in her yard this weekend.

Pamela Coffey told CNN that she was just about to take lunch break from doing yard work on Saturday when she spotted a small metal object jutting out from the soil under her feet.

That's when she discovered what she later identified -- with help from the internet -- as a WWII mortar.

Coffey, who moved to the property 16 months ago, said that the unusually shaped object -- which was covered in dirt and grime and was about the size of her hand -- had some weight to it.

"I put it on my counter and walked away from it for an hour," she said. "I then decided to wash it off in the sink and saw some writing on it."

Her husband, Sam, pulled out a knife and started scrapping off the dirt to get a better look at the symbols etched on the side of it, Coffey said.

"She sees this Japanese lettering on it. The next thing you know I'm sitting at our dining room table scraping on it with a steak knife trying to clean it out," Sam Coffey told CNN affiliate KSDK. "We're trying to figure out what the heck this thing is when from the kitchen she yells, 'Stop! I think that might be a bomb!'"

With the use of Google Lens, an image recognition app, Coffey said everything she found online pointed to the mysterious object being a military WWII Japanese Navy mortar.

"I looked up online what to do with it and called police," Coffey said. She told her husband to take the bomb outside -- and that's when she said "chaos ensued."

For the next six hours, a slew of police from county to federal officials remained on the Coffey's property to analyze the device.

Jefferson County Sheriff's deputies were the first to arrive, and were later joined by federal officials with the ATF, the St. Louis Regional Bomb and Arson Unit and Explosive Ordnance Disposal (EOD) personnel from Scott Air Force, Coffey said.

"Bomb and arson squad just arrived and confirmed it to be a WW2 Japanese Navy mortar," Coffey wrote on Facebook. "There's a bomb robot on its way to retrieve it. Never a dull moment."

A spokesperson with the Scott Air Force Base confirmed to CNN that they responded to the scene for an UXO, an unexploded ordinance.

"Military munitions (ammo) are projectiles, bombs, hand grenades, and other types of ammo that the military use in training and combat," according to the Department of Defense (DoD) website. "Ammo that did not work as it was supposed to work is called UXO or unexploded ordnance."

Coffey said the bomb squad X-rayed the device and determined it was live. The mortar was then handed over to the Air Force.

"The bomb unit said it has a blast range of 500 feet," she said. "They said this was a super rare find and we're lucky we found it before we started excavating."

The Scott Air Force Base spokesperson confirmed to CNN that they took the device to a range and detonated it.

The couple has found weird items on their property before

This wasn't the first unusual item Coffey has found on the hillside of their property in Jefferson County -- but she said so far, it's definitely the weirdest.

Due to the amount of items -- mainly car parts and home goods -- that the couple has found buried throughout their yard, they obtained an excavator to dig out some bigger items that are protruding through the dirt.

"We are now buying a metal detector before we get started," she said. "It's been a fun adventure."

Some of the items are really old in age, while others are from this decade, she said.

While its unclear how the mortar became lodged in the steep hillside, Coffey said it is believed that people that lived on the property a decade ago used the area as a junk yard.

Sam Coffey told KSDK he felt "incredibly grateful" to still have "all of my limbs still attached" after their discovery.

"This is why women live longer than men because here I am, scraping a bomb with a steak knife when my wife makes me stop and call the sheriff's department!"