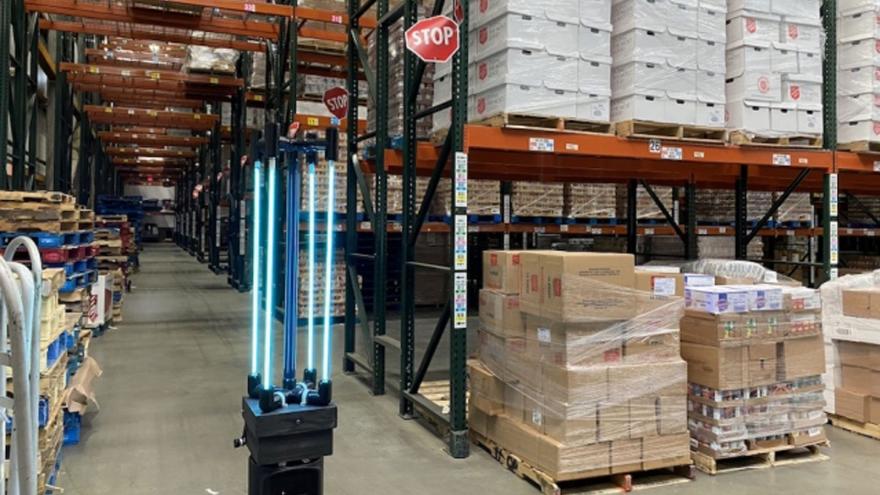 (CNN) -- MIT has designed a robot that is capable of disinfecting the floor of a 4,000-square foot warehouse in only half an hour, and it could one day be used to clean your local grocery store or school.

The university's Computer Science and Artificial Intelligence Laboratory (CSAIL) worked with Ava Robotics -- a company that focuses on creating telepresence robots -- and the Greater Boston Food Bank (GBFB) to develop a robot that uses a custom UV-C light to disinfect surfaces and neutralize aerosolized forms of the coronavirus.

Development on this project began in early April, and one of the researchers said that it came in direct response to the pandemic. The results have been encouraging enough that the researchers say that autonomous UV disinfection could be done in other environments such as supermarkets, factories and restaurants.

Covid-19 mainly spreads via airborne transmission, and it is capable of remaining on surfaces for several days. With states across the US reporting a surge in cases and no concrete timetable for a possible vaccine, there is currently no near-term end to the pandemic. That leaves schools and supermarkets looking for solutions to effectively disinfect areas.

While household cleaning solutions are able to reduce the spread of the virus, an autonomous robot capable of quickly and efficiently cleaning large areas such as warehouses or grocery stores could prove to be essential.The researchers used the base of one of Ava Robotics' mobile robots and modified it with a custom UV-C light fixture.

UV-C light has proven effective at killing bacteria and viruses on surfaces, the researchers said. However, it is harmful to humans. The robot was built to be autonomous without the need for any direct supervision or interaction.

The team tele-operated the robot to teach it to navigate around the warehouse by setting up predefined waypoints, and the team said that it is currently exploring how to use the robot's onboard sensors to adapt to changes in the environment.

The goal is for the robot to become capable of adapting to our world to dynamically change its plan based on estimated UV-C dosages.

The UV-C array affixed to the top of the mobile robot emits a short-wavelength ultraviolet light that kills microorganisms and disrupts their DNA in a process called ultraviolet germicidal irradiation, the researchers said. This process is typically used in hospital or medical settings to sterilize rooms and stop the spread of microorganisms.

While the team is currently focused on a single robot that is deployed at the food bank, the team said that they are exploring what "multi-robot solutions may look like in the future."