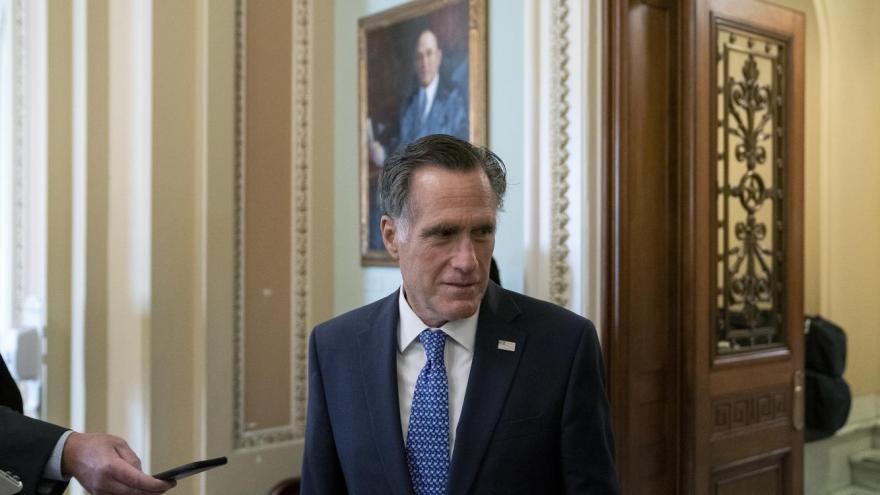 (CNN) -- Two prominent Republican senators on Thursday ripped President Donald Trump's attempt to overturn the results of the presidential election in Michigan, with one going so far as to call the President's strategy "undemocratic."

Utah Sen. Mitt Romney and Nebraska Sen. Ben Sasse -- two of the few lawmakers in their party who are willing to criticize Trump -- released statements late on Thursday night, taking the President to task for his attempts to overturn his loss in Michigan.

Romney's statement was the most direct criticism of Trump's chaotic post-election strategy aimed at overturning President-elect Joe Biden's win of any Republican lawmaker to date.

"Having failed to make even a plausible case of widespread fraud or conspiracy before any court of law, the President has now resorted to overt pressure on state and local officials to subvert the will of the people and overturn the election," Romney said in a statement posted to Twitter. "It is difficult to imagine a worse, more undemocratic action by a sitting American President."

Trump fired back at Romney Friday morning, writing on Twitter that the senator is a "RINO," Republican in name only, and saying, "I'm sure, however, that he feels he got slaughtering by Obama 'fair and square'."

Romney and Sasse were reacting to Trump's decision to invite the Republican leaders of Michigan's legislature to the White House on Friday as he aims to delay or block the certification of the election in key states that went for Biden.

Sasse said in his statement that he is telling his constituents to look at what the Trump legal team is arguing in court, not what they are saying in public.

In lawsuit after lawsuit, the Trump team has either not alleged voter fraud or been unable to back up their claims with evidence. Thursday, Trump and his allies lost cases in Arizona, Pennsylvania and Georgia.

"Based on what I've read in their filings, when Trump campaign lawyers have stood before courts under oath, they have repeatedly refused to actually allege grand fraud -- because there are legal consequences for lying to judges," Sasse said. "President Trump lost Michigan by more than 100,000 votes, and the campaign and its allies have lost in or withdrawn from all five lawsuits in Michigan for being unable to produce any evidence."

It's unlikely that the statements from Romney and Sasse are a sign that support is waning on Capitol Hill for Trump and his post-election campaign of lies and conspiracy theories.

Romney was the only Republican senator to vote to convict Trump during his impeachment trial earlier this year and has been a frequent critic of the President. Sasse is a sometimes-critic of the President, going hot and cold with the President but having stepped up his critiques more in recent months, including on a phone town hall with constituents prior to November's election.

Most Republican lawmakers have encouraged the President to take his unsubstantiated claims of voter fraud to court and have refused to acknowledge Biden as the President-elect. Biden will win the Electoral College by a vote of 306-232, CNN projects, the same margin that Trump won by in 2016. He will also garner more than 5 million more votes than Trump in the popular vote.

Despite that clear win for Biden, Trump has sent lawyers across the country to press claims of voter fraud, aiming to get thousands of votes thrown out in order to swing elections in his favor. His personal lawyer, Rudy Giuliani, is fronting the legal effort and held a circus-like news conference on Thursday in which he and a slew of other Trump attorneys made wild claims about fraud and voting machines changing votes from Trump to Biden -- none of which had any evidence or were based in fact.

Sasse pointed to that news conference as particularly dangerous.

"Wild press conferences erode public trust," he said. "So no, obviously Rudy and his buddies should not pressure electors to ignore their certification obligations under the statute. We are a nation of laws, not tweets."