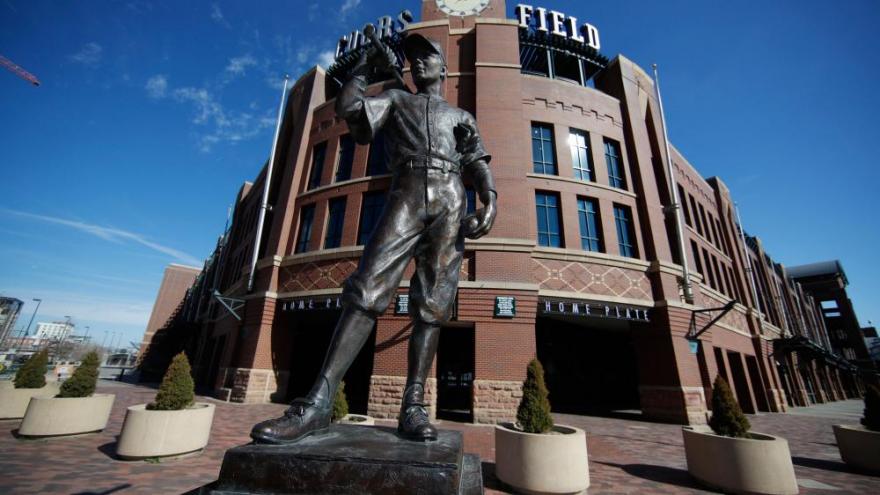 A scuplture entitled "The Player" by George Lundeen stands outside the main entracne to Coors Field, home of Major League Baseball's Colorado Rockies.

(CNN) -- Coors Field in Denver -- home of Major League Baseball's Colorado Rockies -- is expected to be announced as the new host of this year's All-Star Game, according to multiple news outlets.

The MLB has not responded to CNN's request for comment.

Political leaders in the state expressed enthusiasm about potentially hosting the game.

"We are excited about the possibility of hosting the All-Star Game and are awaiting MLB's decision," Denver Mayor Michael Hancock said.

"Like so many Coloradans, I'm excited and hopeful that Major League Baseball makes the best decision and formally chooses to play the 2021 All-Star game in Denver," he said in a statement. "It would be good for baseball and good for Colorado."

The game was initially supposed to take place in Atlanta, but the league decided to move the game and draft in response to Georgia's recently passed laws that placed new restrictions on voting.

The legislation, which was signed last week by Republican Gov. Brian Kemp, imposes voter identification requirements for absentee ballots, empowers state officials to take over local elections boards, limits the use of ballot drop boxes and makes it a crime to approach voters to give them food and water as they wait in line.

Critics of the law have called for boycotts of Georgia-based companies. Chief executives and other high-ranking leaders from more than 100 companies, including Target, Snapchat and Uber, issued a public statement last week opposing any measures that deny eligible voters the right to cast ballots.

There's also been a response within the MLB -- during their opening day on Saturday, the Atlanta Braves covered the All-Star patch on their jersey's.

Shortly after MLB announced the game's relocation, the Braves released a statement saying they were disappointed by the league's decision.

"Unfortunately, businesses, employees, and fans in Georgia are victims of this decision," the statement read.

The game being taken out of Atlanta is expected to have a $100 million impact on the state, according to a statement from Holly Quinlan, president and CEO of Cobb Travel and Tourism.

Despite backlash surrounding the law, members of the Republican party have stood their ground.

"Major League Baseball caved to fear, political opportunism, and liberal lies," Kemp said Friday. "Georgians - and all Americans - should fully understand what the MLB's knee-jerk decision means: cancel culture and woke political activists are coming for every aspect of your life, sports included. If the left doesn't agree with you, facts and the truth do not matter."

In Texas, Gov. Greg Abbott declined to throw the ceremonial first pitch at the Rangers' season opener against the Toronto Blue Jays because of the MLB's stance on the voter laws. Abbott said the league was adopting "a false narrative" about the voter laws in Georgia.