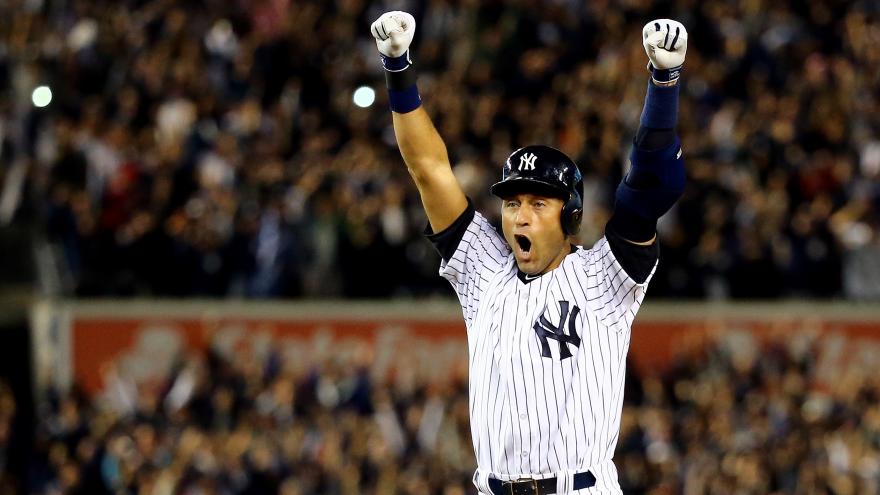 (CNN) -- New York Yankees shortstop Derek Jeter was one of two players elected into the Baseball Hall of Fame on Tuesday.

Jeter played 20 seasons for the Yankees, winning five World Series titles with the team. Jeter was one vote away from being the second player ever to get a unanimous vote. The first was his teammate Mariano Rivera last year.

Jeter had a storied career with the Yankees. Drafted sixth overall in 1992, Jeter made his debut in May 1995. He was a 14-time American League All-Star and was sixth all-time with 3,645 career hits, according to Major League Baseball's website.

Jeter retired in 2014 and in 2017 became the 22nd Yankee to have his number retired, according to the MLB.

Rivera said in a statement Monday he'd always known Jeter to have "a deep desire to win."

"That singular commitment to his team is what made him so special. Derek prided himself on being a consistent presence. No moment was too big," Rivera said. "He was fearless, and he was the type of leader we knew we could count on year after year. I feel so fortunate that he was a teammate and friend for my entire career."

Jeter's desire to win along with his drive to "be the very best player" also stuck out to Brian Cashman, Yankees senior vice president and general manager.

"From the outset, he played the game the right way, and his confidence was contagious," Cashman said. "He provided countless memories for our fans, and it's clear how much he will always mean to them. Thanks to Derek, we reached the pinnacle of the baseball world five times, and he will forever be a defining player of his generation."

The Hall of Fame Class of 2020 will be inducted in Cooperstown, New York, on July 26.

Larry Walker is now the second Canadian-born player elected to the Hall. The first was Fergie Jenkins, who was inducted in 1991, according to the Hall of Fame's website.

Tuesday was also special for Walker because this was his 10th and final year on the ballot.

The power-hitting outfielder played 17 seasons with the Montreal Expos, Colorado Rockies and St. Louis Cardinals. He made his debut in August 1989, according to MLB's website.

Walker was a five-time All-Star and seven-time Gold Glove winner.

"Larry blessed our region for parts of 10 seasons and we feel extremely fortunate to be a part of his incredible career," said Rockies owner, Chairman and CEO Dick Monfort. Walker also became the first player in Rockies history to be elected to the Hall of Fame, a team news release said.

Cardinals chairman Bill DeWitt Jr. said Walker was instrumental to the team's trip to their first World Series in 17 years. The Cardinals went to the 2004 World Series -- the first time since 1987 -- but lost to the Boston Red Sox.

There were 32 candidates who could've gotten their Hall of Fame elections Tuesday.

Two controversial players on the ballot Tuesday included Barry Bonds and Roger Clemens, who both faced accusations of performance enhancing drug use. Both have denied the accusations. Neither received the 75% of the ballots to gain election. This is each player's eighth year on the ballot; players are allowed only 10 years on the ballot.