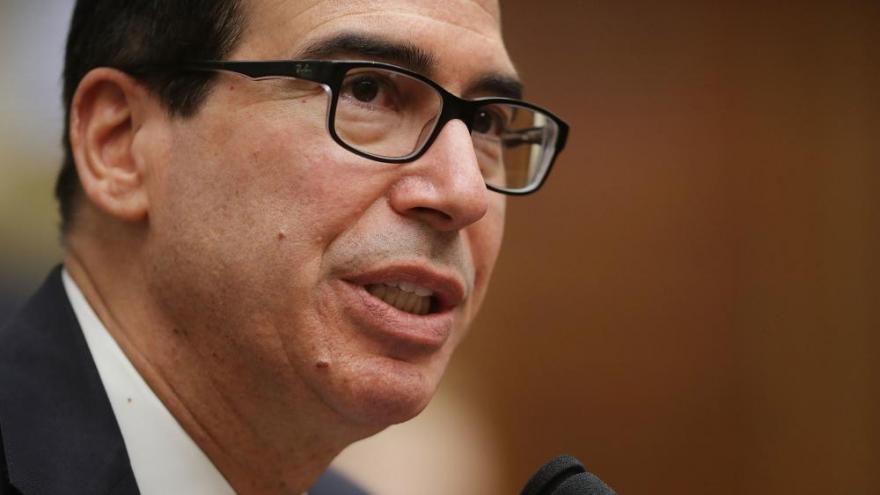 Treasury Secretary Steve Mnuchin said it was his idea -- not President Donald Trump's -- to add the President's name to coronavirus stimulus checks that are being sent to millions of Americans, saying it's "a terrific symbol" to Americans.

(CNN) -- Treasury Secretary Steve Mnuchin on Sunday said it was his idea -- not President Donald Trump's -- to add the President's name to coronavirus stimulus checks that are being sent to millions of Americans, saying it's "a terrific symbol" to Americans.

"We did put the President's name on the check. That was my idea. He is the President and I think it's a terrific symbol to the American public," Mnuchin told CNN's Jake Tapper on "State of the Union."

When asked about his name appearing on the checks during a briefing last week, Trump said, "Well, I don't know much about it, but I understand my name is there. I don't know where they're going, how they're going."

"I'm sure people will be very happy to get a big, fat, beautiful check and my name is on it," the President said, adding that "it's not delaying anything."

Earlier last week, two senior Treasury officials told The Washington Post, which first reported the decision for the President's name to appear on checks, that the move would probably set back the delivery date on the first set of paper checks -- potentially slowing a process that could already take up to 20 weeks. The Internal Revenue Service, however, has insisted that the move will not result in a delay.

A senior administration official separately confirmed to CNN last week that the President's name was being included on the checks in a last-minute Treasury Department order.

Mnuchin said Sunday that Trump also "could have been authorized to sign the checks," but that it "would have slowed things down. We didn't want to do that."

While the President's name will appear on the paper checks being sent to millions of Americans, many others are receiving the payments through direct deposit, if they have their bank information on file with the Treasury Department. Some of those direct deposit payments have already begun being deposited in bank accounts.

According to a House Ways and Means Committee memo, the paper checks will be issued at a rate of about 5 million per week, and it could take up to 20 weeks to issue them all, with individuals with the lowest incomes, based on adjusted gross income, set to receive their checks first.