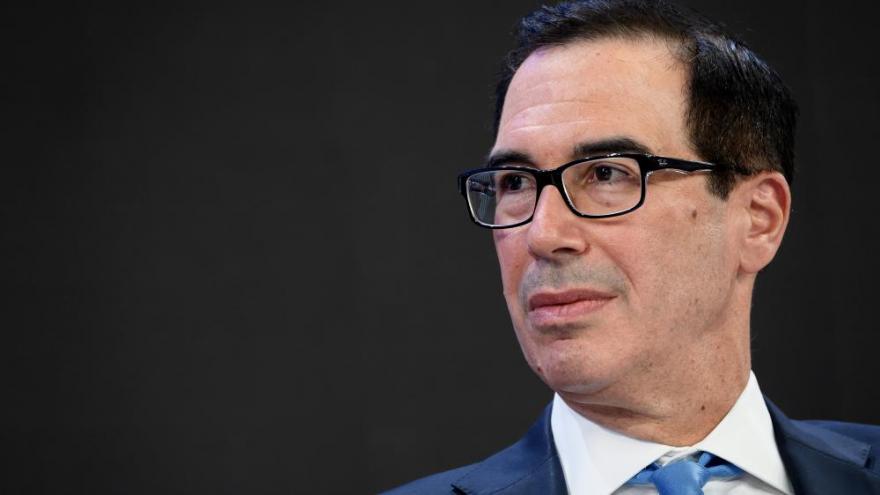 Treasury Secretary Steven Mnuchin said he's hopeful that an agreement with Democratic congressional leaders could be reached on a small business package stalled in Congress.

(CNN) -- A deal on a small business package could be announced as soon as Monday, President Donald Trump said at a White House press conference, though additional funding for coronavirus testing remains a key sticking point.

"I would like to begin by saying we are continuing to negotiate with the Democrats to get our great workers and small businesses all over the country taken care of. I think we are getting close to a deal. It could happen. It could happen. A lot of good work has been going on and we could have an answer tomorrow and we are going to see what exactly does take place," Trump said Sunday evening.

The President also said that there will be additional aid in the package.

"I think you will have a nice answer tomorrow," Trump said.

Three sources involved in the negotiations said that the details over how to spend billions over testing for Covid-19 remain unresolved in the talks over the massive relief bill under negotiation.

Democrats and Republicans have different visions over a testing policy, one of the sources said.

Trump has increasingly said that testing needs to be done by the states, while Democrats have called for a testing program led by the federal government.

As part of the deal to replenish the small business loan program, the two sides had agreed to $25 billion for testing.

But the details are more complicated to sort out.

It appears increasingly likely that talks will extend into Monday, but they are still negotiating Sunday night, the sources said.

House Majority Leader Steny Hoyer advised members Sunday night that the House could meet as soon as Wednesday morning to consider an expected deal to provide about $300 billion of additional money to the Paycheck Protection Program.

Mnuchin had said earlier Sunday he was hopeful that an agreement with Democratic congressional leaders could be reached Sunday to provide billions of dollars more to small businesses in a package stalled in Congress.

The funding is needed to continue the program for small businesses affected by the coronavirus crisis, which ran out of funding last week. Congressional Democrats also said Sunday the parties were nearing an agreement.

Mnuchin said that there will be money for testing, hospitals and small businesses in the new bill, but at this point, there will not be money for state and local governments -- which Trump reiterated later Sunday at the White House briefing. Funding for state and local governments has been a sticking point between Democrats and Republicans in negotiations for the next Payroll Protection Program bill.

The President, who said he spoke with "just about all" of the Republican senators Sunday, said that he supports funding for state and local governments, but that "we'll be saving that for a later date."

Mnuchin said that the deal would allocate $300 billion for the Paycheck Protection Program, $50 billion appropriated for the Economic Injury Disaster Loan program, $75 billion for hospitals and $25 billion to invest in testing.

And while some analysts and experts tell CNN that ultimately the PPP might need upwards of $1 trillion, Mnuchin said that another $300 billion "should be sufficient to reach almost everybody."

"I'm hopeful that we can reach an agreement that the Senate can pass this tomorrow, and that the House can take it up on Tuesday. Wednesday, we would be back up and running," he said.

A source involved with the talks told CNN that the numbers haven't been finalized, but the PPP will receive closer to $310 billion, which includes a set-aside for under-served businesses like ones run by minorities and rural businesses, as requested by Democrats.

The source also confirmed Mnuchin's numbers for hospitals and testing, but said that the deal would instead have $60 billion for disaster loans under the separate Economic Injury Disaster Loan Program.

Trump has not given the final sign off yet, the source said, and some final details still need to be ironed out.

Mnuchin said that he's had "constant discussions" with Trump, Senate Majority Leader Mitch McConnell, House Minority Leader Kevin McCarthy and White House chief of staff Mark Meadows, who are "all on board with the same plan."

Sunday afternoon, a Senate GOP leadership aide told CNN that McConnell -- along with Trump, Meadows and Mnuchin -- had hosted a member call during the afternoon to provide an update on the package.

At the beginning of the call, McConnell and Mnuchin touted the additional funding for PPP and reiterated the additional state and local government funding and food stamp demands from Democrats will not be in the final package, the aide said.

Mnuchin added the unresolved items are limited to the testing portion of the package and, according to the aide, said he is working with McConnell and Republican Sens. Lamar Alexander of Tennessee and Roy Blunt of Missouri to resolve those quickly so the package can pass the Senate as soon as possible.

Trump thanked everyone on the call for their hard work, and McConnell told lawmakers that the legislative text and a scheduling update will be provided as quickly as possible, the aide said.

On Thursday, the Small Business Administration officially ran out of money for the PPP, its $349 billion emergency lending program for small businesses. Negotiations have been ongoing since then to inject more money into the program, but a key sticking point has been Democrats' demand for another $150 billion for state and local governments.

"The President has heard from the governors and he's prepared to discuss that in the next bill," Mnuchin told CNN, saying that the federal government still has funds from the $2.2 trillion stimulus law enacted last month to distribute to the states.

But on the same program Sunday, Senate Minority Leader Chuck Schumer said Democrats are continuing "to push hard" for that funding.

"It is so important. We don't want our police, our firefighters, our EMTs, our bus drivers -- this is not an abstract issue -- we don't want them fired. They're as important as anybody else," Schumer said.

Despite Schumer's comments on CNN that he was still pushing for more state and local government money, the source told CNN that it will not be in the final deal. Neither will Democrats' ask for hazard pay for frontline workers, the source said.

Schumer told Tapper that "we've made very good progress" in funding talks and was optimistic that Democrats, Republicans and the administration could come to an agreement Sunday night or early Monday morning.

Pelosi said on ABC News' "This Week" that the negotiators "have common ground," adding, "I think we're very close to agreement."

Many small businesses have been struggling to stay afloat and are on the precipice of collapse as the coronavirus pandemic has caused nonessential businesses to close until stay-at-home orders are lifted. Tens of thousands of businesses were unable to access the PPP before it ran out of money in less than two weeks.

Questions remain about how lawmakers would vote on a deal. In Hoyer's advisory to members Sunday evening, he said a "recorded vote on the interim legislation is likely in the House this week."

Pelosi suggested earlier Sunday she could back a proposal from other Democratic congressional leaders to allow proxy voting during the coronavirus pandemic, which would allow a member to designate another member to cast a vote on their behalf, eliminating the need for many members to travel back to Washington.

Pelosi said on "Fox News Sunday" that relevant congressional committee chairs had arrived at the idea of proxy voting after she tasked them with considering ways to keep up with House business while members adhered to federal guidelines recommending against travel and gathering in groups.

Proxy voting would require a rule change and thus would need broad support from both parties in order to pass with so many lawmakers out of town. It is seen as an option that would represent less of a dramatic change than remote voting, which poses some security concerns.

This story has been updated with additional developments Sunday.

Today 76° Times of sun and clouds