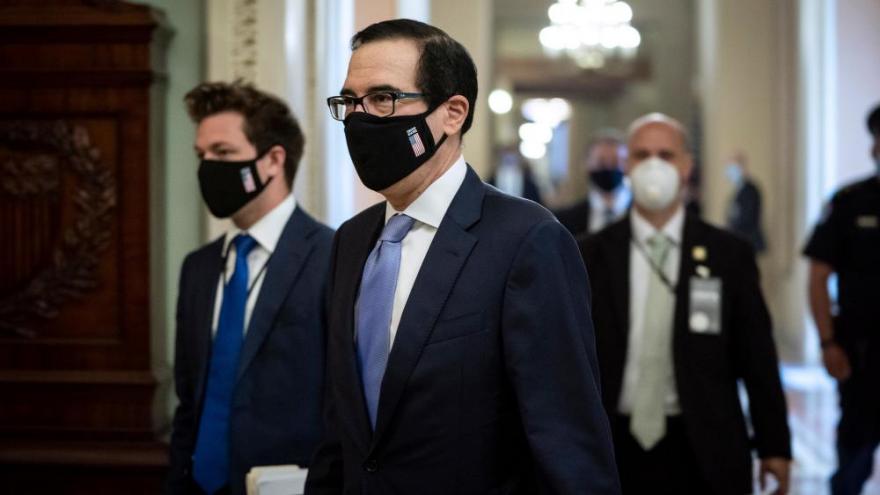 Treasury Secretary Steve Mnuchin, seen here at the Capitol on May 19, 2020, said that the US economy will not be shut down again, despite a continued rise in coronavirus cases -- more than 2 million in the US -- and a key model projecting a steep increase this fall.

(CNN) -- Treasury Secretary Steve Mnuchin said Thursday that the US economy will not be shut down again, despite a continued rise in coronavirus cases -- more than 2 million in the US -- and a key model projecting a steep increase this fall.

His comments come as states and territories begin the process of phased reopening and the US passed 2 million confirmed cases. And a key coronavirus model from the Institute for Health Metrics and Evaluation at the University of Washington is now forecasting a steep rise in daily deaths forecast in the fall. US stocks tumbled on the news Thursday.

The economic impact of the pandemic continues as well. On Thursday, it was revealed that an additional 1.5 million Americans filed for first-time unemployment benefits last week, bringing the total since the economy shut down to 44.2 million people over the last 12 weeks.

Mnuchin said Thursday that over the next month another $1 trillion will be pumped into the economy.

He also reiterated that the next round of CARES Act funding will focus on industries that are especially impacted, citing hotels, travel, entertainment and restaurants, saying it will be "much more targeted."

"We're prepared to go back to Congress for more money to support the American worker," he said.

Mnuchin said he expects the restaurant industry will "come in and now take up a bunch" of remaining Paycheck Protection Program funding after additional flexibility legislation was passed, and said it is an industry "that will need a lot of help -- continued help -- until we have a vaccine."