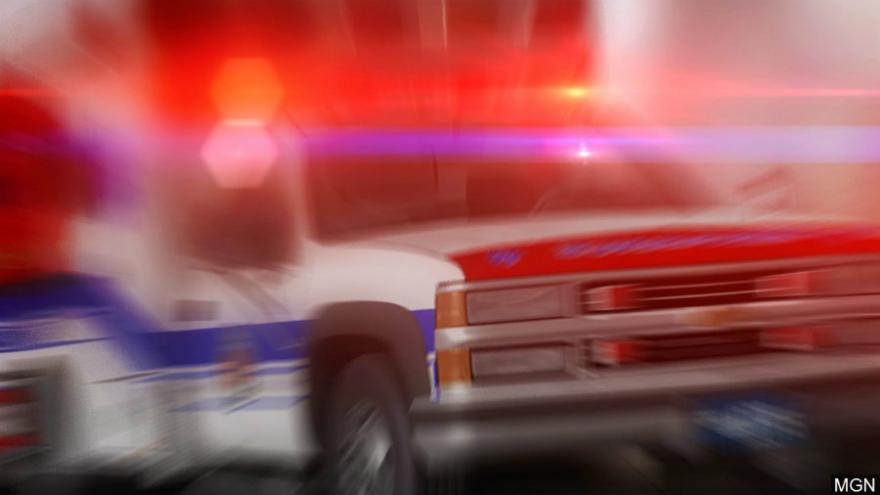 (CNN) -- A Florida woman claims an ambulance wouldn't take her 30-year-old daughter to the hospital, because, she said, fire rescue personnel assumed the family couldn't afford it.

The Hillsborough County fire rescue personnel were put on immediate administrative leave with pay and face disciplinary hearings Tuesday, according to the county.

The incident happened early in the morning on July 4. That's when Nicole Black called 911 after she discovered her daughter Crystle Galloway wasn't well. The first thing Black said on the 911 recording is: "I need an ambulance."

But that's not how Galloway ended up getting to a medical facility.

While sending fire rescue, the dispatcher asked Black more about what happened. Black told dispatch that her daughter had a baby by cesarean section June 27 and wasn't feeling well.

"My granddaughter called and said, 'Something's wrong with mommy,' " Black told dispatch. Since she lived a couple of doors down, she immediately ran down to her daughter's. There she found Galloway slumped over in the bathroom, her "lips swollen, drooling from the mouth." Black said her daughter was only "kind of" alert and had passed out.

The dispatcher codedthe incident as a "Stroke (CVA)/Transient Ischemic Attack"according to county documents, and sent Lt. John "Mike" Morris, Acting Lt. Cortney Barton and fire medics Justin Sweeney and Andrew J. Martin. Two sheriff's deputies were first on the scene. A separate investigation has cleared the deputies of any wrongdoing.

Fire rescue units arrived 12 minutes after being dispatched, according to county records of the incident.

According to Lt. Morris and fire medic Sweeny's account as summarized by the department,county documents, the fire rescue crew said when they got to Galloway's complexthey asked her if she wanted to be taken to the hospital and she "responded affirmatively."

Galloway was able to get up and walk to the stair chair which the crew could use to carry herdown three flights. Rather than put her in the ambulance, they put her in Black's car and the mother drove off. The crew said it went back into service immediately.

"The whole conversation as the EMS drivers put my child in my car was this was what was best for us because we couldn't afford an ambulance," Black told CNN affiliate WFTS.

"They never did a medical evaluation, they never took her blood pressure or temperature. They came up, looked at her and said it is going to be $600 to take her to the hospital," said Chris Jayson, Black's attorney. Jayson added the family does have insurance.

"They first treated them like they were drunk, because it was early in the morning of the 4th of July. In reality, she was a new mother who spent the entire day at home taking care of her kids and she didn't feel well and wasn't sleeping with this new baby."

In a July 23 press conference, Hillsborough County Administrator Mike Merrill confirmed that the crew did fail to take Galloway's vitals and they also failed to do a medical evaluation, according to an internal investigation. The medics "did not do their job" and violated standard procedure, Merrill said.

With Galloway in the car, Black rushed her daughter to an urgent care center three blocks away. The center did a CT scan and decided Galloway should be transported by helicopter to Tampa General Hospital. There Galloway slipped into a coma.

That same day, a recording shows the nurse supervisor on duty at the hospital called the Hillsborough County dispatch to relay a complaint from the family about the way they were treated by rescue personnel. When the Hillsborough Countydispatcher called Black back later that same day to respond to the complaint, Black's distress can be heardin the department's recording of the call.

"My daughter was a good girl. She graduated with her Bachelor's degree. She doesn't drink or smoke or anything and she was 120 pounds soaking wet and your fire department denied her services, and she's in a coma," she told the dispatcher.

In the July 23 press conference, the county administrator Merrill said the crew violated three major department procedures. In addition to not taking Galloway's vitals, they also failed to get an "informed refusal," meaning the rescue crew didn't get any signed paperwork that said the family refused an ambulance.

Merrill said the investigation found that there was "some confusion about transport." There was some discussion on the scene about Black taking her daughter to the hospital, but Galloway also "nodded" in the affirmative when asked if she wanted them to take her to the hospital. "So there was some confusion," Merrill said twice. At the press conference, Merrill did not address Black's claim that the crew wouldn't take Galloway because of money.

The union president that represents Hillsborough County Fire employees spoke for the medics and said that the mother is telling an "absolute lie." "We would never talk to someone about how expensive an ambulance ride is, that's an absolute lie," said Derrik Ryan. Ryan said that the crew didn't take the woman's vitals in her home because the place was small and dark. He said they planned to take them once they got her downstairs, but the mother took off too fast in the car for them to get all the information.

The four rescue workers say in their written statements to the department that the mother said she would get her daughter to the hospital.

The third violation, Merrill said, was to falsify the nature of the call. The crew filled out paperwork after their call that said the patient could not be found. One of the rescue workers said the call was labeled as such because "there was no patient information to input and it was a lift assist only," according to the letter Andrew Martin wrote to the county about the call. Martin says in the letter that Black only wanted help getting her daughter down the stairs and that Black said she would take her to the hospital.

Ryan added that because the crew didn't have the family's details, the code to describe the call was the only one they could pick in the system.

Michael Lozano Jr., a medical director for the fire department who reviewed the incidentconcluded he "cannot trust" the workers who "failed to perform the essential elements of their job," according to an email he sent to the department. After the disciplinary hearing Tuesday, Merrill will decide how to proceed.

"At this point there is a real absence of information about why the fire medics performed, or failed to perform in this case, the way they did," Merrill said. "This is clearly unacceptable."

Black's lawyer said people have asked Black if she thinks her race was an issue in the crew's response.

"She says she doesn't know what's in their heart, but at the minimum they came in their house and treated them differently and assumed they couldn't afford their help," Jayson said.

Jayson said it is too early to tell if the family will file a lawsuit. He's still collecting medical records and they don't have the death certificate yet.

"If the delay caused this failure and led to her demise, we will take appropriate action," Jayson said.

The family has set up a GoFundme page to help care for Galloway's children. In addition to her newborn son, Galloway has two young daughters who will remain in Black's care.

"My daughter begged for her life, she begged," Black told CNN's Tampaaffiliate WFTS."You can tell me 'you're sorry,' you can give me your condolences, but you still have to work this out with God."