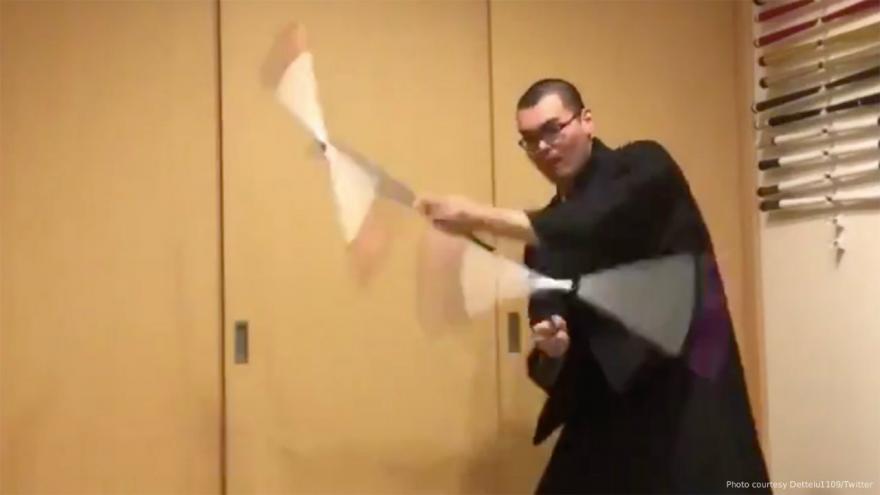 (CNN) -- Buddhist monks are posting videos of themselves skipping, juggling, boxing and even wielding a Star Wars light saber to prove that their traditional attire is not a driving hazard.

The footage, shared on Twitter with the viral hashtag #僧衣でできるもん, meaning "I can do this in monks' robes," started to appear after a monk in Japan's Fukui prefecture was stopped last year and fined ¥6,000 ($55) for wearing a kimono.

Police claimed the traditional robes "could affect safe driving" as its sleeves and length were considered too long, according to Yomiuri Shimbun newspaper.

After consulting with his sect, the monk, who was reportedly on his way to a Buddhist ceremony, refused to pay the penalty, triggering the solidarity hashtag which has been now been fully embraced by his peers.

One of them, Tetsuya Hangai, 29, posted an impressive video of himself juggling sticks while wearing a black robe.

"I've been juggling devil sticks for 11 years as a hobby so when I saw the hashtag trending in response to the monk's driving fine, I thought there was something I could do," he told CNN.

Another monk, Takatsugu Mihara, filmed himself skipping. "I wanted to express my opinion using gentle means," he told CNN.

The fined monk, in his 40s, said he had driven with the same attire for 20 years without receiving any traffic violations, according to Yomiuri Shimbun.

He can now be formally charged for violating road traffic laws and be taken to court, the newspaper reported.