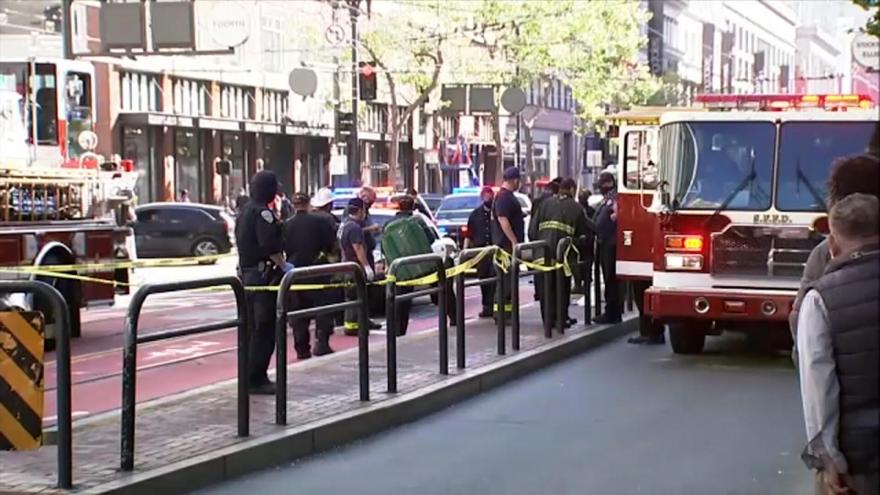 (CNN) -- Asian American women keep getting attacked in cities across the US.

Horrifying assaults have been reported in San Francisco, Baltimore and New York City within the last week.

The attacks come as reports of anti-Asian violence increase nationally and Congress considers a bill to combat a surge in hate crimes targeting the Asian American community.

In San Francisco, police responded to reports of a stabbing Tuesday afternoon in the downtown area. Two women, ages 84 and 63, were taken to a hospital with multiple stab wounds and remained hospitalized on Wednesday, the San Francisco Police Department said in a news release.

Fifty-four-year-old Patrick Thompson, was arrested a few hours after the incident on charges of attempted murder and elder abuse, police said. Thompson was identified due to prior interactions with officers, police said.

A woman who witnessed the incident said the suspect was carrying a large knife with "knuckles on the handle" and holes in its blade.

"Her back was turned and all I see was the feathers come out of her jacket, so I'm very sure that she got sliced," Patricia Lee told CNN affiliate KGO.

A spokesperson for the San Francisco Police Department said it had no information about an attorney for Thompson.

While the investigation is ongoing and authorities have not ruled it a hate crime, the incident comes as the country grapples with a rise in bias crimes against Asian Americans.

"This is something that is happening to Asian people in our community specifically, this is a pattern," Matt Haney, member of the San Francisco Board of Supervisors, told KGO.

"It's hard to imagine anything more disgusting and awful. These folks were waiting for the bus, they were targeted," said Haney, whose district includes the area where the incident took place.

San Francisco District Attorney Chesa Boudin said he was heartbroken after hearing about the stabbing incident.

"We will not tolerate brutal attacks like this," he tweeted.

The Baltimore attack happened Sunday night and was captured on the store's surveillance cameras, according to a Baltimore Police Department incident report.

The women, ages 66 and 67, are employees of Wonderland Liquors and were inside the store when a man, later identified by police as Daryl Doles, entered the store "carrying a cinder block piece in his hand," the incident report states.

One of the women was attempting to close the front door of the store when Doles forced his way in, causing them both to fall, the incident report states. "Once on the ground Doles is on top of (the woman) and holds her by the hair while" she "unsuccessfully" attempts to grab the cinder block, according to the incident report.

The woman's sister then attempts to help her, and Doles strikes her in the face as well, according to the incident report.

Both women were transported to area hospitals, police said. One woman had "multiple lacerations ... to her face" and was "bleeding profusely" while her sister "suffered a bleeding laceration to her forehead and possible concussion," the incident report states.

The women were treated and "have since been released," said BPD spokesperson Lindsey Eldridge in a Wednesday statement.

"After the assault, the suspect fled the location but was later apprehended, arrested, and charged accordingly," said Eldridge. An officer located Doles about a half mile from the liquor store, according to the incident report.

"While we are still learning the facts, one thing is clear: Such shocking acts of violence against fellow members of our neighborhoods cannot go on," said a statement from former US Attorney Robert Hur, who represents the women.

The BPD has not yet responded to CNN's questions about whether the attack will be investigated as a hate crime.

Hur said his clients "are recovering from their serious injuries."

CNN has reached out to Doles' attorney for comment but has not heard back.

Doles is scheduled to go before a judge on June 3 for a preliminary hearing, court records show. A verified GoFundMe fundraiser for the women has raised more than $60,000 in two days.

In New York City, at least four Asian Americans were injured last weekend in separate incidents, including an assault with a hammer, authorities said.

In one of the incidents, two Asian women, ages 29 and 31, were approached from behind by a person who asked them to remove their face masks, the New York City Police Department said.

Video shows the person swing a hammer at the women, who tried to fight off the attacker before walking away. The attacker wounded the 31-year-old in the head, and she was taken to a hospital, according to NYPD's hate crimes Twitter account. As of Wednesday night, no arrests had been made.

At least 80 anti-Asian hate crimes were reported since the beginning of the year through May 2, according to the NYPD.

But the true scope of the problem is difficult to quantify due to poor data collection and because some victims are hesitant to report crimes.

The Justice Department and FBI are required by a 1990 federal law called the Hate Crimes Statistics Act to publish an annual report on hate crime statistics. While the report is considered the most comprehensive look at hate crime across the country, law enforcement agencies are not required to submit their data. Many agencies do not, creating an incomplete nationwide data set.

Researchers at the Center for the Study of Hate and Extremism at California State University, San Bernardino analyzed preliminary data from more than a dozen of the nation's largest local law enforcement agencies. Police in Los Angeles, New York, Boston, Seattle, Dallas and San Jose, California, reported an increase in anti-Asian attacks last year compared to the past five years, the study shows.