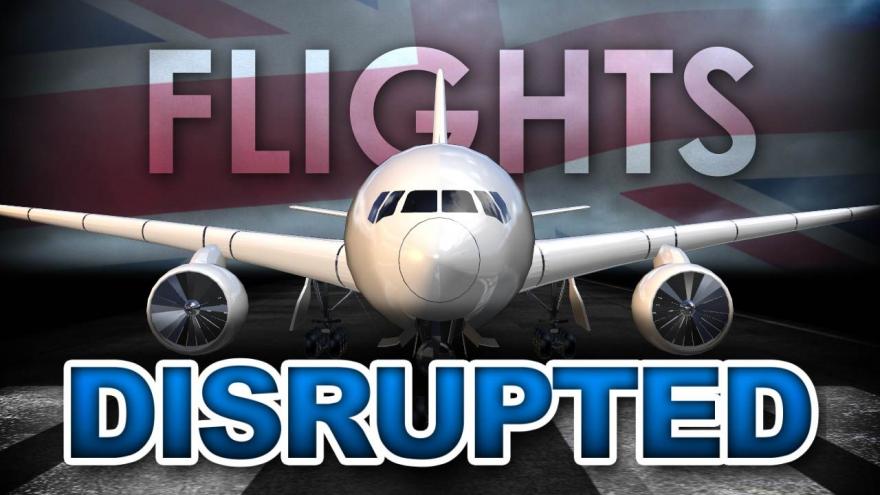 The spokeswoman told CNN they were made aware of the unconfirmed sightings about 5:20 p.m. (12:20 p.m. ET) and closed the runway as a precaution.

The latest closure came only hours after more than 32 hours of complete shutdown due to repeated drone sightings, affecting more than 110,000 passengers during the busiest travel period of the year.

A Thomas Cook flight was the first to land at the airport on Friday after almost two days of chaos, according to Flight Radar 24.A significant number of flights are now landing and taking off, although cancellations and delays continue.

"Gatwick's runway is currently available and a limited number of aircraft are scheduled for departure and arrival," the airport said early Friday.It advised passengers to continue checking the status of their flights with their airline before setting out.

Gatwick had been closed since 9 p.m. Wednesday local time -- bar a brief reprieve of 45 minutes early Thursday -- after drones were spotted near the airfield. The last drone sighting was more than 24 hours after the first, leaving hundreds of flights grounded.

The drone operator -- if it is just one individual -- has not been found but Gatwick said it was now considered safe to reopen the airport.

"Overnight we have been able to work with partners, including government agencies and the military, to put measures in place which have provided the confidence we needed to reopen the runway and ensure the safety of passengers, which remains our priority," the airport said.

The closure left thousands of people stranded at the airport, with 110,000 passengers on 760 flights due to arrive or depart Thursday. Many more were due on Friday, some of the 2.6 million people Gatwick was expected to handle over the Christmas-New Year period.

Sussex Police said Friday it had active lines of inquiry and that officers were doing all they could "to find those responsible for this deliberate and serious act."

Assistant chief constable Steve Barry told CNN that the force was "in a much better position now" to respond to any drone sightings.

The Ministry of Defence said Thursday that specialist equipment had been deployed to assist Sussex Police in their efforts. Barry was not able to go into detail about what that equipment might be.

Police will also consider shooting the drone down, Barry said. That option was previously put aside over concerns for stray bullets.

"The issue is whether or not, in relation to the threat that is posed, it's proportionate. As time has gone on and the level of disruption and threat increased, obviously that option has come back into availability," he said.

How many people are affected?

During the shutdown at Gatwick -- which does not usually operate overnight -- passengers described scenes of "total chaos," with staff unable to offer much information.

Eddie Boyes, who was due to fly to Odessa in Ukraine, was stuck at the terminal Thursday with his wife and four-year-old son for nine hours. He told CNN they had received "no information from the airport -- any information I have managed to get has been from social media.

"We have been given food vouchers totaling £30 ($38), offered a hotel room initially but very shortly afterwards this was retracted. People are sleeping on the floor in South Terminal."

Passengers due to land at Gatwick were instead arriving in Manchester, Luton or Heathrow in the UK, or even as far afield as Paris and Amsterdam. According to the BBC, one flight from New York to Gatwick ended up landing at Doncaster Sheffield Airport, sparking amusement online from locals imagining Americans exploring rural Yorkshire.

Others ended up stranded all over the world, with some tweeting about waiting to hear if they could fly to the UK from as far afield as Taiwan and Las Vegas.

It seems unlikely that affected travelers will be able to claim compensation from their airline. The UK Civil Aviation Authority issued guidance advising that "given the reasons for the current disruption" at Gatwick, the body "considers this event to be an extraordinary circumstance." This means airlines are not obliged to pay compensation.

Transport Secretary Chris Grayling told the BBC the burden should fall on travel insurance companies. "It goes beyond what the airlines are responsible for, this should be covered under travel insurance policies but we will talk to the insurance industry today to make sure they treat claims reasonably."

Sussex Police said the disruption was deliberate, but unlikely to be terror related. Beyond that, the motivations of the perpetrator or perpetrators remain unclear.

While some UK media have reported that environmental protesters may be behind the incident, no group has come forward to claim responsibility, nor has any manifesto or explanation been released.

According to the Guardian, groups including Extinction Rebellion -- which has previously carried out direct action to highlight the pressing need to tackle climate change -- have denied involvement in the Gatwick incident.

What appears clear is that the perpetrators were well prepared. Police said the drone or drones being used were of "industrial specification."

"Our working assumption is it's larger than what someone might buy online -- we think it may have been adapted and developed. We're working through CCTV footage and trying to identify the make and model," Sussex Police spokesman Jason Tingley said.

Lewis Whyld, a CNN drone operator and photojournalist, said the drone was likely not an off-the-shelf model, but something bigger or more complex, perhaps expertly homemade.

He added that drones can have huge ranges, with some of the more powerful ones controlled from up to 10 miles (16 kilometers) away.

Drones have limited battery power, however, suggesting more than one is being used over Gatwick.

What will happen to the perpetrators?

If and when the people behind the disruption are caught, they could face up to five years in prison for endangering the safety of an aircraft.

Transport and aviation bodies have called for the laws on drone use to be tightened in the wake of the incident, with pilots' union Balpa saying an exclusion zone around airports should be extended from 1 kilometer to 5 kilometers (3 miles).

"It is now obvious that that must happen urgently. This incident also reinforces the need for registration and licensing of operators so that the police can track and trace drones," spokesman Brian Strutton said.

Opposition lawmakers criticized Grayling for not acting on this issue earlier. Shadow aviation minister Karl Turner told the BBC "the government should have brought this legislation forward, it's been an abject failure and I blame Chris Grayling."