More than 100,000 migrants encountered at US-Mexico border in past 4 weeks, data shows 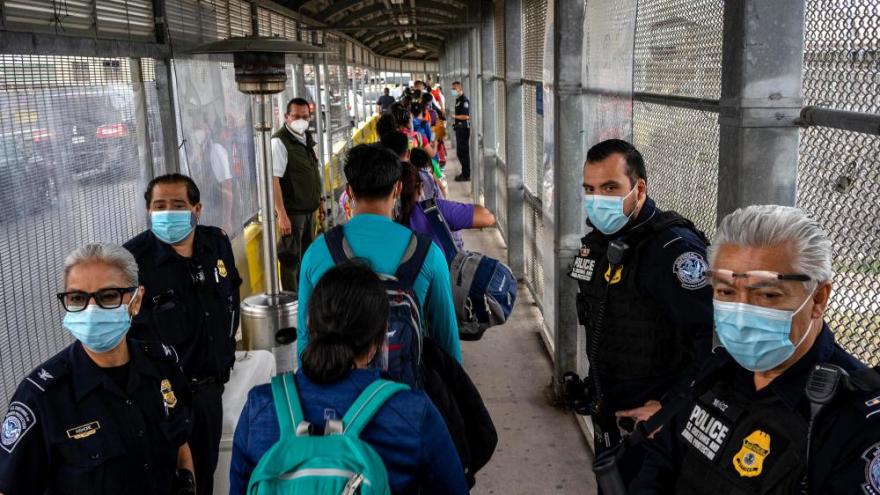 US authorities reportedly arrested more than 100,000 migrants, shown here on Feb 26, on the US-Mexico border over the past four weeks ending on March 3, making it the highest number of arrests in five years.

(CNN) -- US authorities arrested and encountered more than 100,000 migrants on the US-Mexico border over the past four weeks ending on March 3, according to data obtained by CNN, marking the highest levels for the same time frame in five years.

The number of migrants arrested on the southern border has been increasing in recent weeks, causing alarm among officials as they scramble to provide resources for the increase in minors and families who are unlawfully crossing into the US.

The surge in migrants adds to a growing sense of emergency for the Biden administration which has been seeking to unwind the Trump administration's immigration policies over that time.

"February was unprecedented compared to the last five years," a Homeland Security official told CNN. Single adults make up the biggest portion of apprehensions, but the percentage of families and children jumped last month, according to the official.

Since last April, Customs and Border Protection has seen an increase in border encounters from the Western Hemisphere due to worsening economic conditions brought on by the pandemic and natural disasters in the region, according to the border agency.

Border arrivals typically rise in the spring, but the Covid-19 pandemic has exacerbated the situation and further limited the capacity along the border to process migrants. Last year, the numbers dropped in March and April as the pandemic took hold and travel restrictions were put in place.

At the time, as the pandemic gripped the country, the Trump administration invoked a public health law allowing border officials to turn away migrants apprehended at the border, which is still in effect under the Biden administration.

CNN has reached out to DHS and CBP for comment.

A CBP spokesperson previously said, "The unique challenges of the pandemic require additional authorities, such as the CDC order known as Title 42, to allow DHS to effectively protect both the health and safety of migrants and our communities from the spread of COVID-19. The border is not open, and the vast majority of people are being returned under Title 42."

CNN reported Monday that the number of unaccompanied migrant children in US Border Patrol facilities, which are akin to jail cells and not intended for kids, has reached dramatic highs, according to internal agency documents reviewed by CNN, underscoring the urgent challenge facing the Biden administration.

More than 3,200 unaccompanied migrant children were in Customs and Border Protection custody, according to the documents dated Monday.

That was around half of the total number of people in custody, which was over 6,500 as of Monday morning, the DHS official said. About half of the number of children in custody were in the Rio Grande Valley region of Texas, the official added.

When administration officials, including Department of Homeland Security Alejandro Mayorkas visited the temporary tent facility in Donna, Texas, over the weekend, they saw a "significantly overcrowded facility," predominantly filled with children, the official told CNN.

Border authorities are encountering 4,000 to 5,000 people daily, the official said, adding that just over 500 are unaccompanied children.

There are ongoing discussions about the potential need for additional funding to resource the missions at the border, another Homeland Security official told CNN, saying officials are discussing the possibility of a reprogramming request or supplemental request for funding to Congress in the coming weeks and months.

"If we have increased migrant flow, there will be an increase in the need to deal with undocumented immigrants that come the US," said the official. "If there is a surge in support, who is going to be paying for that?"