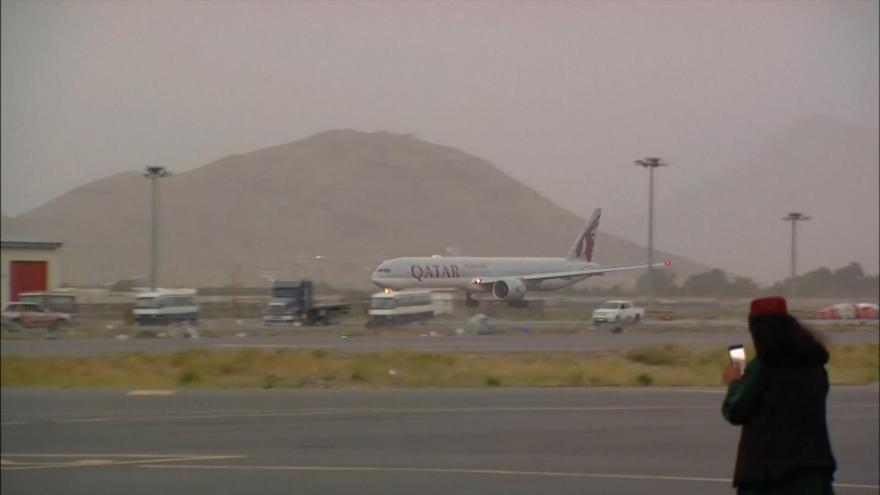 More than 100 Americans were evacuated from Afghanistan on private charter on Tuesday. In this image, A Qatar Airways passenger flight takes off from Kabul airport on September 10.

(CNN) -- More than 100 US citizens and green card holders and nine special immigrant visa holders were evacuated from Afghanistan via a private charter flight on Tuesday, according to two organizations involved in the effort.

Project Dynamo and Human First Coalition said in a press release that the group of evacuees were "moved overland, COVID tested, MMR vaccinated, securely housed and evacuated to safety the afternoon of September 28, 2021 at 2:00 P.M. local time."

Among the passengers evacuated from Kabul were 59 children under the age of 18 and 16 under age 3, according to the groups.

"We would like to thank the U.S. State Department and the United Arab Emirates' Ministry of Foreign Affairs for their cooperation in challenging circumstances to secure the safe return of these U.S. citizens, U.S. Legal Permanent Residents, and Afghan allies," the press release said. "We would also like to acknowledge the Taliban for facilitating the departure of the aircraft by allowing those who want to depart Afghanistan to do so peacefully."

Project Dynamo's co-founder Bryan Stern told CNN Wednesday that they had landed in the UAE but claimed that their follow-on flight to the United States had been denied landing rights in the US. He said they had been "stuck" in the capital of Abu Dhabi and "have been trying to get out."

An administration official noted that this is security protocol. Once the flight landed in the UAE, US government officials had to verify the accuracy of the manifest and the passengers' travel documents. The official described it as the system working as it should, and that as passengers are verified, they expect them to be rebooked on commercial flights and be able to fly to the United States.

CNN has reached out to the Department of Homeland Security.

A State Department official on Tuesday said they "are not going to detail our involvement with any specific groups at this time."

"The evacuation effort has been a monumental task and the U.S. government understands the need to coordinate across agencies, as we have done, but we also appreciate the desire of NGOs and private citizens to assist and have identified a greater need for coordination there," they said.

"The State Department has established a team to coordinate across government agencies and with advocacy groups, nonprofits, and others," the official said, noting that team is working closely with the Defense Department "and other partners to facilitate freedom of movement for those who wish to leave Afghanistan, including U.S. citizens, LPRs, and at-risk Afghans to whom we have a commitment to assist."

Secretary of Defense Lloyd Austin said Tuesday during a Senate Armed Services Committee hearing that a group of 21 US citizens and their family members had been able to leave Afghanistan that day, but declined to give further details about their departure.

Austin could not provide a number of how many Americans are left in Afghanistan, saying the figure "fluctuates daily."

"This has been a dynamic process, but again we will stay focused on this," he added.

State Department Principal Deputy Spokesperson Jalina Porter told reporters Tuesday that the department was not in a position to confirm those additional departures due to "security reasons" and referred to the Department of Defense.

On Monday, a senior State Department official had said the United States was working to facilitate the departure of about 100 American citizens and green card holders who had indicated they were ready to leave Afghanistan.

That official told reporters they are "constantly touching base" with US citizens believed to still be in Afghanistan, as well as other governments, private groups and aircraft carriers to try to arrange charter flights.

That official said there had been "challenges" with the charter flights that had come to US government reception points, including stowaways, unaccompanied minors and passengers who were not on the manifests.

The official described the Taliban's "unpredictability regarding who is permitted to depart" as the biggest impediment to the departure of US citizens and others from Afghanistan. The absence of regular commercial air service is another big constraint, the official said.

"There's a range of contact and dialogue ongoing with the Taliban, particularly in Doha, with the remaining members of the Taliban political commission who are based there," the official said.