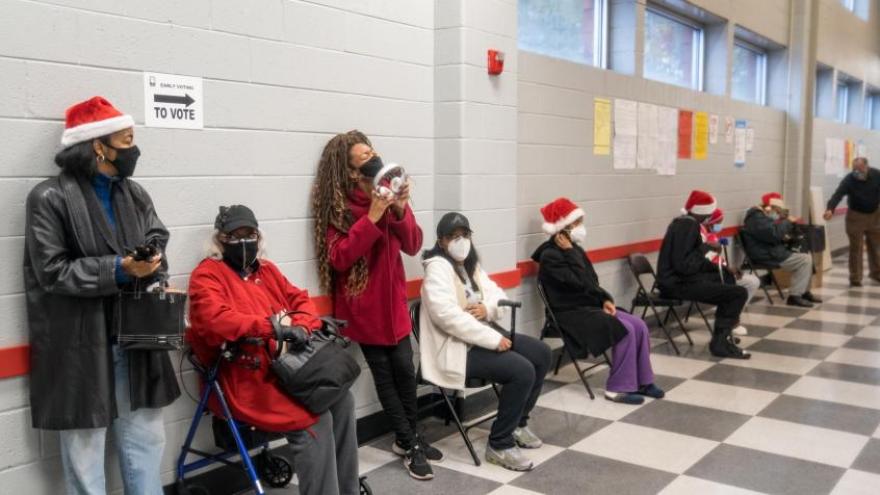 People wait in line for early voting at C.T. Martin Natatorium and Recreation Center on December 14, 2020 in Atlanta, Georgia. Early voting started today in Georgia for the runoff election for the Georgia Senate seats. The race is between Republican incumbents David Perdue and Kelly Loeffler and Democratic candidates John Ossoff and Raphael Warnock.

(CNN) -- More than 1.6 million ballots have already been cast in Georgia's crucial US Senate runoffs with two weeks to go until Election Day -- most of them at early in-person voting locations rather than by mail.

The wave of early voting in the Georgia runoff mirrors high turnout ahead of the general election in November. About 1.9 million Georgians had cast ballots at this point in early voting for the presidential election, according to state election officials.

The January 5 runoffs will determine which party controls the US Senate, and with it the future of President-elect Joe Biden's agenda.

Democrats Jon Ossoff and Rev. Raphael Warnock are challenging incumbent GOP Sens. David Perdue and Kelly Loeffler, respectively. The races weren't settled in November's elections because no one received a majority of the vote in either contest, as required by state law.

If Democrats can flip both seats, they'll effectively control the Senate since Vice President-elect Kamala Harris, as Senate President, will be able to break 50-50 ties in a split chamber.

Democratic energy is high in the state, after Biden became the first Democrat to win the state in 28 years, but the races are very tight and could be won by either party.

Biden and Harris have made trips to the state to stump for Ossoff and Warnock. And President Donald Trump held a rally in Georgia to motivate Republican voters for Perdue and Loeffler ahead of the early voting period.

Early voting in the Georgia Senate runoffs started on December 14 and runs through December 31.