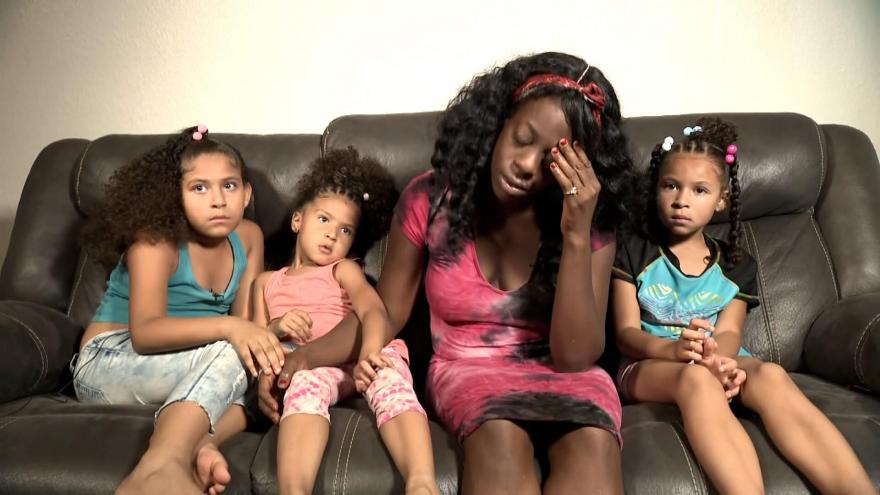 Dasha Kelly was facing eviction and didn’t know how she was going to pay her back rent but a day later, thanks to strangers, more than $170,000 has been raised so far for her and her three daughters.

(CNN) -- Last Monday, Dasha Kelly was facing eviction and didn't know how she was going to pay her back rent. A day later, thanks to strangers, more than $170,000 has been raised so far.

On Tuesday, Kelly sat on her couch, one of the last pieces of furniture left in her apartment in Las Vegas, and was told how much money was raised. She was left speechless as CNN's Erin Burnett told her the amount.

"I just want to tell everybody thank you so much," Kelly said as tears ran down her face. "I'm still in denial."

Kelly was joined by her boyfriend's three daughters, Sharron, 8; Kia, 6; and Imani, 5, who she says she cares for part-time. The family was featured in a CNN story that aired on Monday about the federal eviction moratorium that ended this past weekend.

Last year, the 32-year-old said she lost her job as a card dealer when the pandemic forced casinos to shut down. She is one of the more than 11 million Americans that are behind on their rent, according to the Center on Budget and Policy Priorities.

"I had no idea what we were going to do," Kelly said about facing eviction.

"It gave me a lot of hope," she said. "And I just want to make sure I do the best that I can to help the next person that is in my same situation."

GoFundMe tells CNN they are in close contact with Kelly and funds will stay on hold until they verify her information. GoFundMe says no funds have been withdrawn

Both Shadia Hilo, the girl's mother, and Kelly tell CNN the girls will be returning to Hilo's home for the start of the school year while Kelly determines her next step.