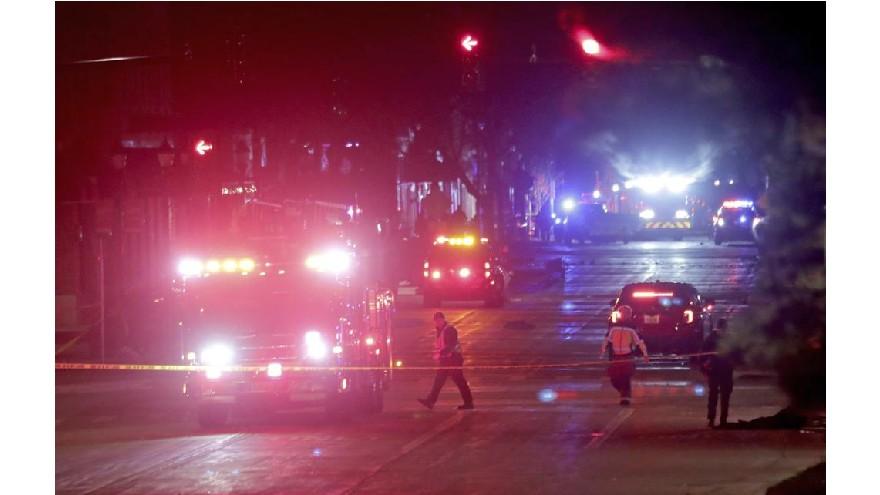 (CNN) -- More than 20 people were injured when a car ran through a Christmas Parade in Wisconsin on Sunday night.

Multiple victims have been transported from the scene to area hospitals via ambulance and others were taken by officers, after a red SUV drove through the Waukesha Christmas Parade, Waukesha Police Chief Daniel P. Thompson said in a press conference.

The Waukesha Police Department has sent a push alert to cellular phones in the area asking those "within a ½ mile radius of the 5 points downtown" to immediately shelter in place.

People were seen on the ground injured after the incident, Milwaukee Journal Sentinel intern Kaylee Staral, who was at the parade, told CNN's Pamela Brown Sunday night.

About "20 to 30 minutes into the parade a red SUV came running down the middle of the street -- there were a lot of screams -- and we almost thought maybe it was Santa but it was a red SUV and it hit a lot of people," Staral said.

The White House is monitoring the situation in Waukesha, Wisconsin, according to an administration official. The FBI Milwaukee field office is also aware of the incident, according to an FBI spokesperson.

Video of the parade published on the city's Facebook page shows a red SUV driving quickly through the parade, followed by a police officer running through the scene. In the clip, the crowd is seen and heard reacting to events off-screen.

A suspect's vehicle has been recovered, and the investigation is ongoing, Thompson said. There is no active threat in the area and "the scene is now safe," the chief added.

"The horrific violence at the Waukesha Christmas Parade is just heartbreaking," Wisconsin Sen. Tammy Baldwin wrote on Twitter. "Please keep the victims in your prayers tonight."

In her description of those injured, Staral said "Right in front of me in the little spot where I was sitting, probably four people were down -- so there were a lot of people that ran to go check on them."

"I believe that the four people in front of me were still breathing but they were down, they were not moving," she added.

Waukesha Police are advising people to avoid the downtown area and have established a family reunification center, the agency said on its official Facebook page

"This is an unspeakable tragedy, affecting us all as we work to overcome an extremely challenging two years and resume our cherished holiday traditions," Waukesha County Executive Paul Farrow said in a statement.

"I had just finished participating in the parade with my wife when I noticed police sirens. Shortly afterward, I learned that a vehicle drove through the parade route injuring many people. Please pray for our community tonight after the horrific events at the Waukesha Christmas Parade."

Farrow added officials are still investigating the incident to understand what happened and asked for prayers for the community.

"Kathy and I are praying for Waukesha tonight and all the kids, families, and community members affected by this senseless act," Wisconsin Governor Tony Evers said on Twitter. "I'm grateful for the first responders and folks who acted quickly to help, and we are in contact with local partners as we await more information."