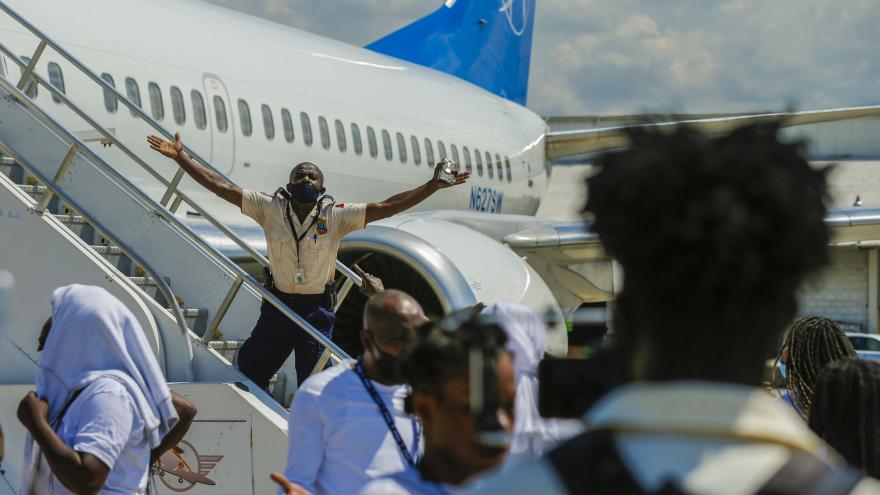 According to the International Organization for Migration, dozens of children with non-Haitian passports have been sent to Haiti as part of the US government\'s massive deportation operation, and pictured, a police officer stops Haitians from boarding in Haiti, on September 21. - Joseph Odelyn/AP

(CNN) -- Dozens of children with non-Haitian passports have been sent to Haiti as part of the US government's massive deportation operation this week, according to the International Organization for Migration.

As of Wednesday, the latest figures available, a total of 1,424 deportees from the US had arrived on 12 flights in Haiti, according to Giuseppe Loprete, chief of mission for the IOM, which is helping process the new arrivals.

More than 170 of them are children, of which at least 41 hold foreign citizenship, he said. Although their parents may be Haitian nationals, at least 30 children have Chilean passports, nine have Brazilian passports and two have Venezuelan passports, he added.

"The kids were born in those countries, they speak Spanish very well," Loprete said, who added that IOM would liaise with Haiti's Ministry of Haitians Living Abroad about them.

Asked what would happen to those children, Haitian Foreign Minister Claude Joseph told CNN, "We are asking for solidarity in the region. I spoke my ambassador in Brazil and she said that the Brazilians are willing to accept them back with their families."

He added that he intends to speak with other regional governments whose citizens are among the deportees.

Chile's immigration authority told CNN Thursday that children born in the country or with permanent residency would be welcomed back.

Brazil's Foreign Ministry said it had "not been notified, so far, about the reported issue" but that consular assistance would be provided for Brazilian citizens.

CNN has reached out to immigration authorities in Venezuela.

The US Department of Homeland Security has been ramping up deportation flights to Haiti, as the Biden administration grapples with an influx of thousands of migrants, many of whom are Haitian, at the US-Mexico border in Del Rio, Texas.

On Thursday, Daniel Foote, the US special envoy for Haiti, resigned from his post in protest over the deportations. In a letter, he said he would "not be associated with the United States inhumane, counterproductive decision to deport thousands of Haitian refugees," citing ongoing humanitarian crises in the impoverished Caribbean nation.

Haiti is still reeling from the political fallout of its president's assassination this summer, and a 7.2 magnitude earthquake in August that left over 2,000 people dead. Capital city Port-au-Prince -- where many migrants are arriving -- is plagued with violent crime, arson and kidnappings for profit.

According to UNICEF, two out of three Haitian migrants who have been returned from the United States border to Port-au-Prince are women and children, including newborn babies with specific needs.

"When children and families are sent back without adequate protection, they find themselves even more vulnerable to violence, poverty and displacement -- factors that drove them to migrate in the first place," Henrietta Fore, executive director of the children's agency, said in a statement.

They 'told us not to fight'

Eddy, a deportee who preferred not to give his surname, described his deportation to CNN earlier this week after trekking across 11 countries to reach the US from Chile.

"When we arrived in the USA, they put us on a bus," he said. "They put chains on our feet, around our stomachs and on our hands. They put us in cars and took us to the airport. There were Haitians on the plane who told us not to fight because there were many soldiers on the plane."

Once deportees arrive, they are tested for Covid-19, handed basic provisions, and dropped off at a central bus station in capital city Port-au-Prince, according to Loprete. Those who positive cases are taken into quarantine by the Haitian Ministry of Health.

As of yesterday, three deportees had tested positive for Covid-19, he said.

Haiti's government has been in turmoil since the assassination of President Jovenel Moise this summer. The country has still not appointed an interim president, nor has the interim government -- run by Prime Minister Ariel Henry -- held long-awaited national elections this month as originally planned.

As more and more would-be migrants are sent back to the troubled country, IOM is helping local officials "scale up" reception operations. They currently have the capacity to receive three flights of deportees per day at Haiti's main international airport in Port-au-Prince, Loprete said.

Under pressure from the sheer number of people arriving, they've started receiving an additional three flights per day of deportees in the northern city of Cap-Haitien, too.

"The flights are back-to-back. We had four flights one day (in Port-au-Prince) and it was very challenging. We've said that we cannot handle flights after 2 p.m., 3 p.m. maximum, due to the security risks in Port-au-Prince, especially at night," he said.

There is no question that the massive deportation operation is a strain for Haiti's government, says Loprete. "This would be a challenge for any government, handling six flights a day back to back."