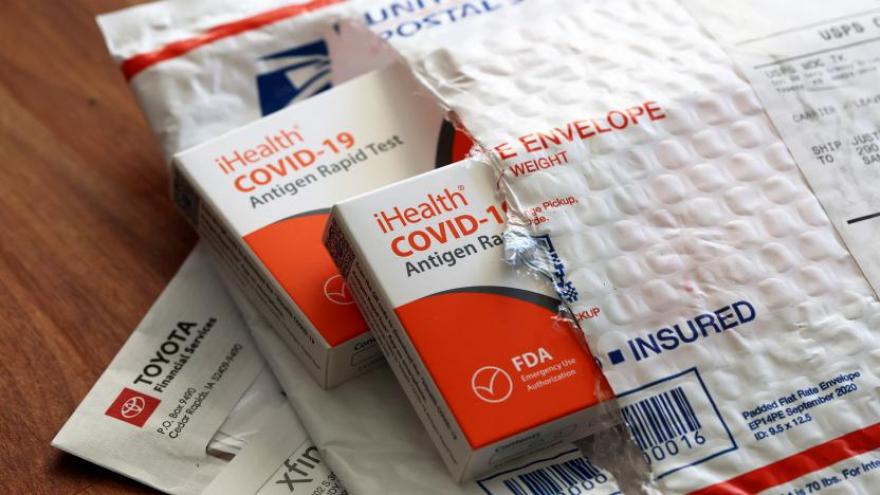 In this photo illustration, free iHealth COVID-19 antigen rapid tests from the federal government sit on a U.S. Postal Service envelope after being delivered on February 4.

"That's more than 80% of those who've ordered their tests have gotten them, and the rest will get them this week," Dr. Tom Inglesby, senior adviser to the White House Covid-19 response team, said on CNN's "New Day."

Roughly 10 million people are still waiting to receive their tests. Several have written to CNN in recent days to vent their frustration that their kits have yet to arrive, some nearly a month after they requested them.

Americans have been able to order four free Covid-19 tests per residential address at covidtests.gov since January 18. The White House is distributing 1 billion tests, which had been in short supply at many retailers and online vendors during the surge of the Omicron variant of the coronavirus in December and January.

The majority of CNN readers praised the ordering process, saying it was easy and swift.

But others ran into roadblocks. Most of them received messages saying orders had already been placed for their addresses, but some said they couldn't get the tests delivered to PO boxes, mobile home parks, boats or rural addresses. Still others said the US Postal Service didn't recognize their addresses or disqualified them because they run small businesses from their homes.

Still waiting for their tests

Those who requested tests received confirmation emails that said they'll get tracking numbers and updates on expected delivery dates once their orders ship. But for some folks, that's the last they heard about their tests.

Irene DiCaprio, who placed her order on January 18, has not received any information about when her tests will arrive at her Orange, Connecticut, home. Several friends who live elsewhere in the state received their kits within a week or two of signing up.

DiCaprio, 70, would like to have the tests in hand before she and her husband travel to Las Vegas in a few weeks for a family reunion that's been on hold for two years. She has only one home test left from a box she bought at Walgreens. As a Medicare enrollee, she is not yet eligible to have the cost of home tests bought at retailers covered.

"When I saw that it was $24 for the two of them, I thought, well, I'm not going to be buying many at the pharmacy," said DiCaprio. "If I have to, I will. But I prefer not to, especially since I'm not going to get reimbursed."

Medicare has said it will start covering home tests bought at retailers in the early spring.

David Baize of Rutherfordton, North Carolina, is surprised that federal officials have not put more of a focus on rapid delivery.

"I would think something of this importance would have a high priority, and there would have been greater attention and effort as to how distribution would unfold," said Baize, 67, who ordered the tests on January 19 but has yet to receive them.

He opened a case with the Postal Service on Sunday to try to get some answers but has yet to hear back. Meanwhile, his family in the Detroit area were sent their free federal tests soon after ordering them.

Asked at a news conference Wednesday about the progress of the free home test program, White House Covid-19 response coordinator Jeff Zients commended the job the Postal Service is doing.

Some of the urgency to get the free federal kits has passed. Home tests are more widely available at retailers now, and many Americans with private insurance can receive up to eight free tests per covered individual each month.

Also, the Omicron wave is receding. When the covidtests.gov site opened on January 18, the average number of new Covid-19 cases reported daily in the US was nearly 750,000. That number has since fallen to just over 136,000 per day.

Still, tests will be needed to interrupt the spread of Covid-19 over the long term since they allow people to get quick diagnoses and access treatment, as well as protect more vulnerable Americans, Inglesby told CNN.

"We're very happy to see that subsiding," he said of the Omicron surge. "But we're going to need these tests for the long run."