More young people across the South are testing positive for coronavirus, officials warn 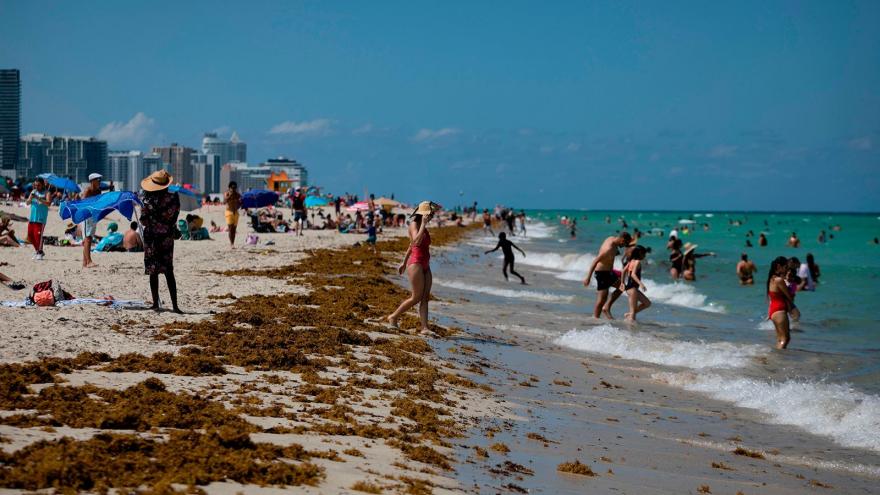 People gather on the beach in Miami Beach, Florida on June 16, 2020. Florida is reporting record daily totals of new coronavirus cases, but you'd never know it looking at the Sunshine State's increasingly busy beaches and hotels.

(CNN) -- Officials in states across the South are warning that more young people are testing positive for coronavirus.

The shifts in demographics have been recorded in parts of Florida, South Carolina, Georgia, Texas and other states -- many of which were some of the first to reopen.

And while some officials have pointed to more widespread testing being done, others say the new cases stem from Americans failing to social distance.

In Mississippi, where one health officer called adherence to social distancing over the past weeks "overwhelmingly disappointing," officials attributed clusters of new cases to fraternity rush parties.

Texas Gov. Greg Abbott said last week that people under 30 made up a majority of new coronavirus cases in several counties. He said that increase in young infected people could be related to Memorial Day parties, visits to bars or other gatherings.

And in Florida, Gov. Ron DeSantis said Friday that the median age was 37 for newly diagnosed coronavirus cases over the last week. In the state, 62% of new cases for the week of June 7 are under 45 years old, he said.

"That is a big change from where we were at the end of March and the beginning of April. It was skewing much older at that time," he said.

Coronavirus has more severe outcomes on older people, Blacks and Hispanics, and people with underlying health conditions, according to demographic data from the US Centers for Disease Control and Prevention. From the beginning of the pandemic up through May 30, the median age of positive coronavirus cases was 48, the CDC said.

Given the case increases, the CDC has been conducting a scientific review about the public health benefits of masks, and will soon make an updated recommendation, a senior CDC official told CNN.

A senior official with knowledge of the review said science is being studied as to whether masks are not only "good for source control -- and keeping you from giving it to others -- but we're also seeing if masks are going to protect you from getting [Covid-19] yourself."

"We know it's a good thing to wear a mask to protect others. We are studying if it is also potentially going to keep you safe," the official added.

So far, the US has recorded more than 2.2 million cases and at least 119,719 deaths, according to Johns Hopkins University.

Where young people are testing positive

In Florida, Gov. DeSantis said Saturday cases are "shifting in a radical direction" toward populations in their 20s and 30s.

"We're also seeing that not only are they testing positive because they're testing more, they're also testing positive at a higher rate increasingly over the last week," DeSantis said, adding there's evidence of transmission between those younger groups.

That increased testing, he said, comes as many people are returning to the workforce.

Experts have raised alarm about Florida's climbing cases, saying the state could become the next US coronavirus epicenter. On Saturday, Florida reported 4,049 new cases -- the most reported in a single day.

In South Carolina, health officials said Friday people under the age of 30 were increasingly testing positive for the virus -- around18% of the state's total cases come from people between the ages of 21 and 30.

"The increases that we're seeing serve as a warning that young adults and youth are not immune to Covid-19," said Dr. Brannon Traxler, the state's Department of Health and Environmental Control physician consultant. "They also tell us that younger South Carolinians are not taking social distancing seriously."

And Georgia's largest hospital also reported seeing an increase in patients in their 20s and 30s, according to CNN affiliate WSB.

"It's a little bit of a disturbing trend, and what frightens me is not only that they are younger, the potential of them infecting other people, particularly parents and grandparents," Chief Medical Officer at Grady Health System Dr. Robert Jansen told the news station.

Despite stark warnings from experts across the US, hundreds gathered Saturday in Tulsa, Oklahoma, for President Donald Trump's first re-election campaign rally since the start of the pandemic.

Few donned masks even as Tulsa County reported its highest number of new infections in a day Saturday -- the fifth time this week the country reported a record.

Less than 7% social distancing in one Texas county

In Galveston County, Texas, Dr. Philip Keiser with the local health department told CNN affiliate KPRC they were seeing a lot of infections in young people.

And the age of the people testing positive is trending younger, he told the news station.

And those numbers come as many haven't followed guidance issued by health officials urging residents to keep their distance and wear face coverings.

"We have data from some of the cell phone companies that show in Galveston County less than 7% of the people are social distancing," Keiser said.

Galveston County is home to about 342,139 people, according to the US Census Bureau.

Nearly half of states see rise in new cases

According to data from Johns Hopkins University, at least 23 states are trending upward in new cases compared to last week. Ten of those states reported more than a 50% jump -- including Texas and Florida, which were some of the first states to begin reopening.

California, the first state to enforce sweeping lockdown measures, is also seeing an increase in cases.

Meanwhile new cases in New York -- once the epicenter of the outbreak -- are declining. On Friday, Gov. Andrew Cuomo delivered his final coronavirus briefing after what he called "111 days of hell."

More than 150,000 new cases of the virus were reported to WHO Thursday, the organization's director-general, Tedros Adhanom Ghebreyesus said in a Friday news conference.

Almost half of those cases were reported from the Americas, he said.