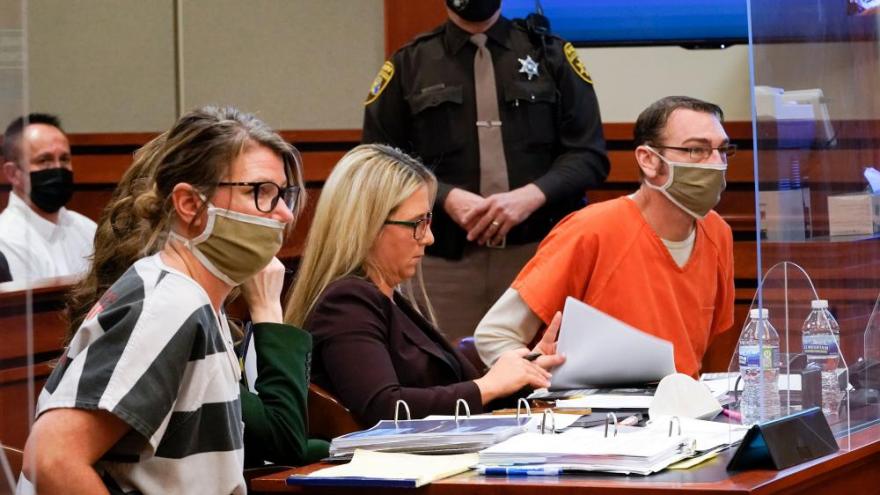 (CNN) -- Shortly after learning that her 15-year-old son had shot fellow students at his Michigan high school, Jennifer Crumbley sent a text message to her boss at the real estate company where she worked as a marketing director.

"I need my job," she wrote to Andrew Smith. "Please don't judge me for what my son did."

The text took Smith by surprise given the tragic news. "I thought she would be more worried about what was going on," he said.

He texted her a response that did not address her job status: "I can't even begin to understand what you're going thru. I'm praying for you. I asked Carolyn to txt you some attorney recommendations."

Smith testified about that November 30 text exchange in a Michigan courtroom Tuesday during a preliminary hearing for Jennifer and James Crumbley, who are accused of giving their son a firearm and ignoring clear warning signs that he was a threat to others.

The parents have each pleaded not guilty to four counts of involuntary manslaughter for their actions -- or lack thereof -- leading up to the shooting. They were arrested days after the shooting in a Detroit warehouse following a manhunt after they failed to come to court for their initial arraignment.

For prosecutors, the text exchange fits their broad argument that the parents were negligent and unconcerned about others. Yet Jennifer Crumbley's defense attorney argued that she was the breadwinner in the family and was, appropriately, concerned about money to pay for an attorney.

The hearing comes more than two months after their son, Ethan Crumbley, opened fire with a 9mm handgun at Oxford High School, about 40 miles north of Detroit, killing four students and injuring seven people. He remains jailed on charges including terrorism causing death and four counts of murder. He has pleaded not guilty, and his attorneys have filed notice they plan to use an insanity defense at trial.

In court Tuesday, Jennifer and James Crumbley sat on opposite ends of the defense table, with two lawyers in between. Both wore jailhouse uniforms and were kept in shackles that, one attorney said, made it difficult for them to take notes during the hearing.

The preliminary hearing is being held before a judge who will determine whether the case should proceed to trial. The hearing is expected to last multiple days.

What Jennifer Crumbley texted the day of the shooting

The first two witnesses in the preliminary hearing were Smith, the former boss, and Kira Pennock, the owner of a horse farm that the parents frequented. Both showed the court a series of messages with Jennifer Crumbley in which she discussed her actions and emotions as the horrific day unfolded.

Pennock testified first on Tuesday and reviewed about 28 pages of Facebook messages with Jennifer Crumbley. The Crumbley parents owned two horses at the barn and had a riding lesson scheduled for the day of the shooting, she said.

Jennifer Crumbley messaged Pennock to say her son was having a rough time and sent her a digital copy of a violent drawing he made on a homework assignment in school depicting a shooting. The drawing also had the phrases "the thoughts won't stop. help me," "blood everywhere," "my life is useless" and "the world is dead," authorities have previously said.

"I was alarmed. I thought that was not normal," Pennock said. "It didn't really seem like something that a kid would do on a test in school."

Pennock later heard there had been a school shooting and reached out to Jennifer Crumbley to see if she was OK. Pennock testified that Crumbley responded later that day saying, "I need to sell my horses."

"My son ruined so many lives today," Crumbley wrote in another message.

"This doesn't even remotely make me think this is your fault," Pennock responded.

"I wish we had warnings something (sic). He's a good kid they made a terrible decision," the mother wrote.

Smith, the former boss, took the stand midday Tuesday and said he received a text from Jennifer Crumbley on November 30 that she had to go to her son's school to deal with the violent drawing.

Later that day, after she had returned to the office, he heard her screaming down the hallway, he testified. She said there was an active shooter at her child's school and she had to go.

He then got a call from her saying that their gun was missing.

"The gun is gone and so are the bullets," Jennifer Crumbley texted Smith.

"I'm praying everything is ok!" he replied.

"Omg Andy he's going to kill himself he must be the shooter," she wrote. "I need a lawyer at a substation with police."

The next text from Jennifer said, "Ethan did it."

Smith, who didn't reply to those texts, testified that his reaction was "complete shock." She later sent him the text about her job status and wrote, "they are taking my cell phone."

Crumbley spoke about horses more than her son, coworkers say

Two of Jennifer Crumbley's former co-workers also testified Tuesday that she spoke about her horses more often than she talked about her son.

Kathy Poliquin, an HR director at the company where Crumbley used to work, said they never talked about her son getting medical attention, but "a few times she mentioned the horse was sick."

When Crumbley messaged her about losing her job, Poliquin told her not to worry about it. A senior member of the company said she would be on administrative leave for a few weeks.

Shannon Smith, Jennifer Crumbley's attorney, noted that her client mainly spoke to Poliquin about work-related matters. She said Crumbley needed information from her so she could get money for a lawyer and that Jennifer was trying to get a loan so she needed check stubs.

Amanda Holland, an administrative assistant at the company, testified Tuesday that Crumbley also spoke about her marital issues and a temporary separation from her husband. Holland said Jennifer didn't talk about her son very often, but said Jennifer once voiced her concerns about Ethan being lonely after a friend moved away.

Holland also said Jennifer spoke often about her horses and that Jennifer told her she was going to the barn "almost every day."

On the day of the shooting, Wagrowski confirmed that Jennifer Crumbley sent her husband a copy of their son's violent drawing with the text, "Call now EMERGENCY."

After some back and forth, Jennifer Crumbley wrote, "I'm very concerned."

The parents went to school for a meeting with officials that lasted about 13 minutes, according to surveillance video.

In court, prosecutor Marc Keast played a 911 call made by James Crumbley after learning about the shooting and realizing his gun was missing.

Attorneys also played a voicemail from Oxford High School to Jennifer Crumbley saying that her son had been looking at bullets on his phone in class. She then texted her son about the incident.

"Seriosuly?? Looking up bullets in school??" she wrote.

"oh yeah," he responded. "it was in first hour. All I did was look up a certain caliber because I was curious. It was on my phone completely harmless."

He said this wasn't anything to get in trouble about and his mother agreed.

"Lol I'm not mad you have to learn not to get caught," she said.