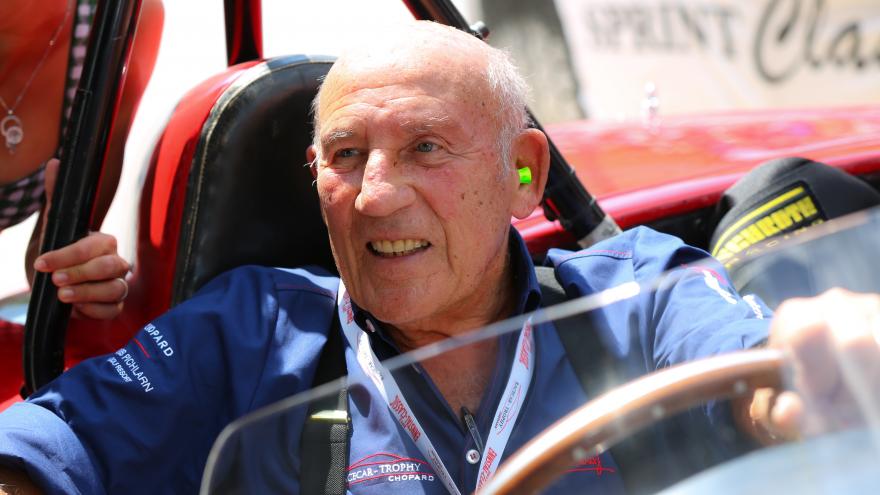 (CNN) -- Stirling Moss, a British motor racing legend widely considered one of the greatest drivers never to win a Formula One title, has died aged 90, according to PA news agency and the Formula One website.

His wife, Susie Moss, told PA that he "died peacefully at his London home following a long illness."

Moss was an active race driver between 1948 and 1962, competing in numerous classifications and winning 212 of the 529 races he competed in.

He was also the F1 Driver's Championship runner-up on four occasions over the course of his career.

Moss won 16 Grands Prix during his career, including "iconic" victories in Monaco and Germany in 1961, according to F1.

"Moss contested 66 Grands Prix from 1951 to 1961, driving for the likes of Vanwall, Maserati and Mercedes, where he famously formed a contented and ruthlessly effective partnership with lead driver Juan Manuel Fangio," said F1 in a statement.

"All at F1 send our heartfelt condolences to Lady Susie and Sir Stirling's family and friends."

Mercedes, one of Moss's former teams, said in a tweet on Sunday: "Today, the sporting world lost not only a true icon and a legend, but a gentleman. The Team and the Mercedes Motorsport family have lost a dear friend. Sir Stirling, we'll miss you."

It was on joining the all-conquering Mercedes team of Juan Manuel Fangio that his first F1 world championship success came, winning the 1955 British Grand Prix, beating the legendary Argentine into second place.

Moss finished runner-up in the championship to Fangio that year and twice more subsequently, but was in 1958 that he came closest to claiming the F1 world title.

He lost out to Mike Hawthorn by a single point, but at the Portuguese Grand Prix he helped get his British rival reinstated after he had been disqualified following a spin, sparing him a six-point penalty.

"I had no hesitation in doing it," Moss recalled many years later. "I can't see how this is open to debate. The fact that he was my only rival in the championship didn't come into my thinking. Absolutely not."

It was an incredible act of sportsmanship and helped cement his popularity among the British public, who admired his flamboyant style and never-say-die attitude.

Moss's career officially ended after an horrific crash at the Goodwood circuit in southern England on Easter Monday 1962 when he had to be cut out of his car and suffered life-threatening injuries.

It was a month before he was fully conscious and he reluctantly called time on full-time competition at the age of 32 because of the extent of his injuries.

Although he had retired he was forever associated with fast driving and the rhetorical phrase "Who do you think you are, Stirling Moss?" was supposedly the standard question all British policemen asked speeding motorists.

Ever a draw for the crowds, Moss continued to race in a multitude of events and motoring festivals until he was 81, always being the star attraction.

He was knighted by Queen Elizabeth II in 2000 for services to motorsport.

Moss retired from public life in January 2018 because of health issues arising from a bronchial infection he picked up on a trip to Singapore in 2016.

Tributes to Moss have flooded in after his death, led by Jean Todt, president of world governing body, the FIA, who tweeted: "Very sad day. Stirling Moss left us after a long fight. He was a true legend in motor sport and will remain so forever."

Ferrari also tweeted: "RIP Sir Stirling. A true legend and a wonderful person. To Ferrari, he was a formidable opponent. Our thoughts are with his wife, family and friends."