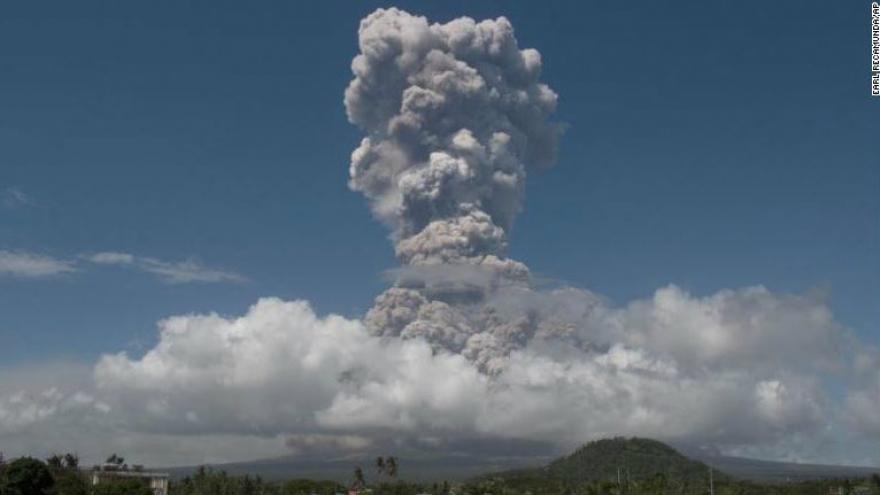 (CNN) -- More than 27,000 people have been evacuated in the Philippines as the country warned a hazardous volcanic eruption might be imminent.

The Philippine Institute of Volcanology and Seismology (PHIVOLCS) on Monday raised its alert level to four from three last week for the Mayon Volcano -- the country's most active volcano -- after it exhibited increasing seismic unrest, lava fountaining and summit explosions.

Photographs showed the volcano, located in Albay province in southeastern Luzon, shooting a huge column of ash into the sky. Lava has been seen flowing down from the crater since last week.

The public has been advised to stay vigilant and avoid the danger zone, which covers an eight-kilometer (five mile) radius from the volcano summit, according to the agency. Pilots have also been advised to avoid flying close to the volcanic ash to avoid possible damage to the aircraft.

"The evacuation has been ongoing since [the volcano] started showing signs of instability," Mark Dambal, information officer at the Philippines' Office of Civil Defense, told CNN.

"Because of the volcanic activity, the danger zone was extended from six kilometers to eight kilometers [from the volcanic summit]," he added. "People staying in the area are now ordered to be evacuated."

He added that more than 24,000 people have been displaced to evacuation centers across the province, while another 3,100 have moved to stay with relatives and friends.

In a media briefing Monday, the agency's director Renato Solidum warned that this eruption could be similar to that of 2001, which featured pyroclastic flow, according to CNN affiliate CNN Philippines.

A possible pyroclastic flow -- characterized by a rapid movement of hot lava blocks, pumice, ash and gas along volcanic slopes -- could reach up to three kilometers (1.8 miles), Solidum said.

Lava was seen to be flowing more voluminously than before, according to a press release from the agency. It also stated that lava eruptions have resulted in an ash plume of up to 1,300 meters (4,300 feet) above the summit.

Classes at private and public schools have been suspended as a precautionary measure, Albay Gov. Al Francis C. Bichara posted on Facebook. He has also advised residents to wear facemasks and stay indoors.

Last week, the Institute had hoisted alert level three, which indicated "an increased tendency to hazardous eruption", after a series of steam-driven eruptions and rockfalls were reported last week.

Situated on the island of Luzon, about 330 kilometers (205 miles) southeast of Manila, Mayon is one of the world's most active volcanoes.

Since 616, it has erupted 47 times, with many of the explosions causing deadly mudflows and ash falls.

In 2014, thousands of residents were ordered to evacuate the same area after an alert was issued, while in 2013, five climbers died when they were hit by falling rocks thrown up by a particularly violent blast.

The volcano's most devastating eruption took place in 1814 when at least 1,200 people were killed.