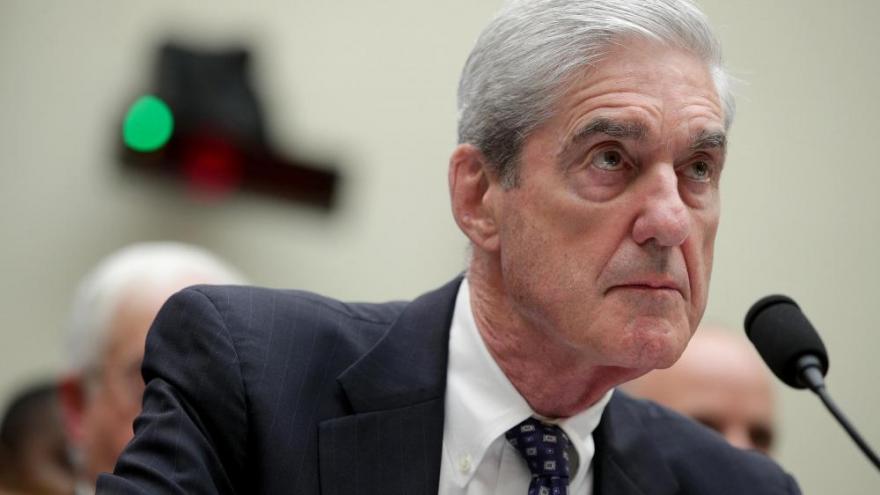 Former Special Counsel Robert Mueller testifies before the House Intelligence Committee about his report on Russian interference in the 2016 presidential election in the Rayburn House Office Building July 24, 2019 in Washington, DC.

(CNN) -- Former special counsel Robert Mueller on Tuesday defended his Russia investigation after a former lead prosecutor on the team published a book sharply critical of final decisions not to subpoena President Donald Trump for testimony or pursue a financial autopsy of his records during the probe.

In a book published Tuesday, one of Mueller's former top prosecutors, Andrew Weissmann, characterized the lack of pushing for more information from Trump or around Trump's ties to Russia as a negotiation tactic -- while the White House took advantage of Mueller because Trump never intended to give fulsome answers in the probe. Weissmann singled out Mueller deputy Aaron Zebley for criticism.

"It is not surprising that members of the Special Counsel's Office did not always agree, but it is disappointing to hear criticism of our team based on incomplete information," Mueller said in a statement.

"My deputy, Aaron Zebley, was privy to the full scope of the investigation and all that was at issue. I selected him for that role because I knew from our ten years working together that he is meticulous and principled. He was an invaluable and trusted counselor to me from start to finish," Mueller said, adding that he stands by the decisions he made in the probe as well as the "conclusions of our investigation."

Mueller and Zebley continue to work together at a private law firm in Washington. Weissmann is now an MSNBC commentator, law professor and partner at a different firm.

In his book, "Where Law Ends: Inside the Mueller Investigation," Weissmann slammed Mueller for not fully answering the question of why Trump behaved so pro-Russia during the campaign, because the Russia investigators did not fully seek the President's financial records.

He also criticized Zebley specifically for blocking or disagreeing with steps Weissmann wanted to take in the prosecution of former Trump campaign chairman Paul Manafort and other parts of the investigation.

Weissmann also disagreed with Mueller's decision not to reach a decision on whether Trump should be prosecuted for obstructing justice.

The special counsel's office operated for months under the fear they would be fired if they took investigative steps the President disliked, Weissmann alleges in his book.

"We still do not know if there are other financial ties between the president and either the Russian government or Russian oligarchs. We do not know whether he paid bribes to foreign officials to secure favorable treatment for his business interests, a potential violation of the Foreign Corrupt Practices Act, which would provide leverage against the president," he wrote. "We do not know if he had other Russian business deals in the works at the time he was running for president, how they might have aided or constrained his campaign, or even if they are continuing to influence his presidency ... The inability to chase down all financial leads, or to examine all crimes, gnawed at me, and still does."

Instead of subpoenaing Trump for testimony, Mueller accepted written answers that raised even more questions for his team. After documenting several episodes in which Trump attempted to end the investigation prematurely, Mueller declined to decide whether to charge him with obstruction of justice, partly because of a Justice Department policy that prevents the indictment of a sitting president.

He did, however, outline several times where Trump's actions met the legal threshold for obstruction. Attorney General William Barr and other top Justice Department leaders declined to indict the President.