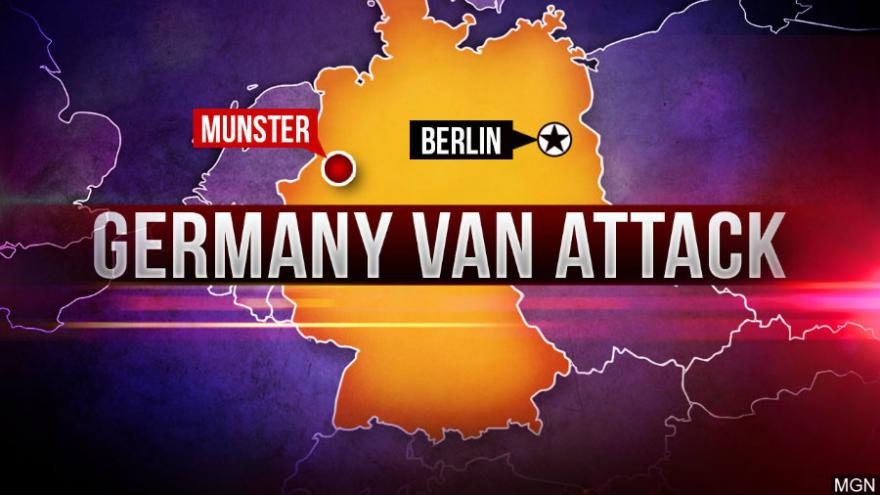 (CNN) -- A man who drove a van into a crowd of people in the German city of Muenster on Saturday acted alone, police said.

The driver killed two people and injured 20 others when he drove into a restaurant's open terrace in an apparently deliberate act, before fatally shooting himself.

Police had said they are investigating witness reports of people fleeing out of the van after the attack. Spokesman Jochan Laschki said the driver had no accomplices, and the investigation is ongoing.

He said there was no known connection to radical Islam but that investigators are still looking into the man's background.

The attack happened about 3:30 p.m local time in the old part of the western German city, an area popular on weekends. It was a warm sunny afternoon, one of the first nice days of spring, and many people were out, Bild editor Julian Reichelt told CNN.

German Chancellor Angela Merkel said she was "deeply shocked by the terrible events in Muenster."

In a statement tweeted by a German government spokeswoman, Merkel said "everything is now being done to clarify the act and support the victims and their families."

"With dismay, I learned of the terrible incident in Muenster," Interior Minister Horst Seehofer said in a statement, adding, "Police in Muenster and throughout (the state of North Rhine-Westphalia) are now working hard to investigate the matter."

Muenster, with about 300,000 people, is home to numerous universities and has a student population of about 58,000, the city government says. The city calls itself the cycling capital of Germany and says about 100,000 residents use a bike daily.