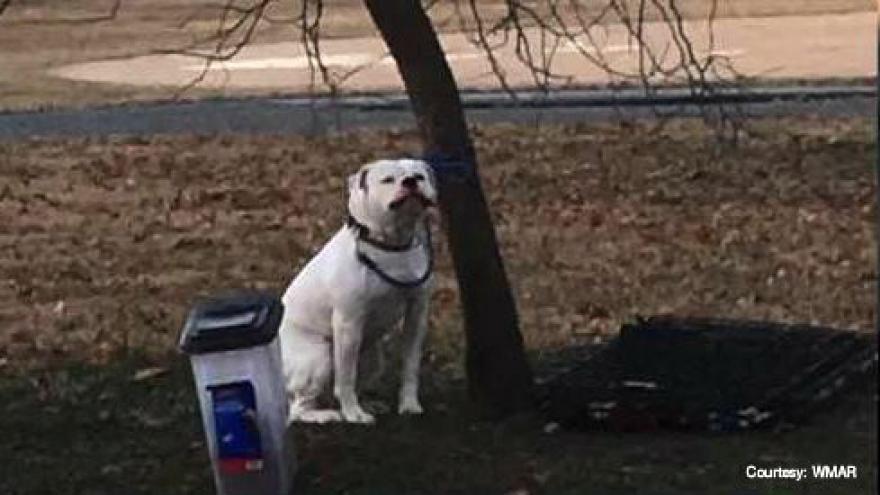 BALTIMORE, Md. (WMAR) -- A dog abandoned by his owner now has a line of people hoping to adopt him. Duke, a two-year-old American Bulldog, was found in Patterson Park early Saturday morning.

Stephanie Dagenhart found him tied to a tree and shaking. She was going to take him straight to BARCS but got the sense he needed some space, so she sat with him in the cold and waited around an hour for help to arrive.

Duke was abandoned in the park with several of his belongings and a note believed to be written by his previous owner.

"The note said, his name was Duke and he had his favorite bone and food and crate with him and could someone please love him," said Dagenhart.

Dagenhart came across Duke while walking her two rescue dogs around 7 in the morning. She saw him sitting there with the stuff and her heart sank.

"He was just sitting there so somber and freezing cold and I could not get that out of my head he was shaking so hard from being cold," Dagenhart said.

When she didn't see anyone else around she called the police, animal control, and wrote a post on a neighborhood page. She wrote she was losing faith in humanity.

"I sat on the bench about 12 feet from him and just kind of calling him by his name and just talking to him and sitting with him to let him know he's not by himself anymore," said Dagenhart.

Then to her surprise, other neighbors started showing up.

And finally animal control came to pick him up. The two-year-old American bulldog was taken to BARCS where he'll be until Friday. Even though multiple people want to adopt him, there's a technicality standing between him and his new home.

"Right now, he's on a three-day stray hold, which is a state law. When animals come in to BARCS they have to be here atleast 72 hours before we can release them. Since Duke had the note we know his family was unable to keep him and didn't want to, but without that official documentation to sign him over he does have to legally stay here until the 19th," said Bailey Deacon, director of Communications for Baltimore Animal Rescue & Care Shelter, Inc. (BARCS).

BARCS is now asking that the owner give them a call so Duke can go sooner to his hopefully forever home.

"There are lots of people interested in adopting him. We have a lot of potential adopters in line and we've also been inundated with Facebook messages and emails. Everyone in the community just wants to give Duke a home and I think that's just the warm spot of this entire story," said Deacon.

Dagenhart said she really wants to meet the new owner and hopes she runs into Duke again in the park.

"I feel like you do have to stop you do have to stay. You know, it wasn't a choice," said Dagenhart. "I think he kind of captured everyone's hearts because he's so adorable and looked so stoic just sitting around that tree."

She also wants to mark the tree in some way and to have it be a reminder to people that there are humane ways of surrendering a pet, if need be.

BARCS is an open admission shelter and always accepts animals into their care with no judgment or questions asked. For more information on rehoming or surrendering a pet at BARCS, baltimoreanimalshelter.org/services.